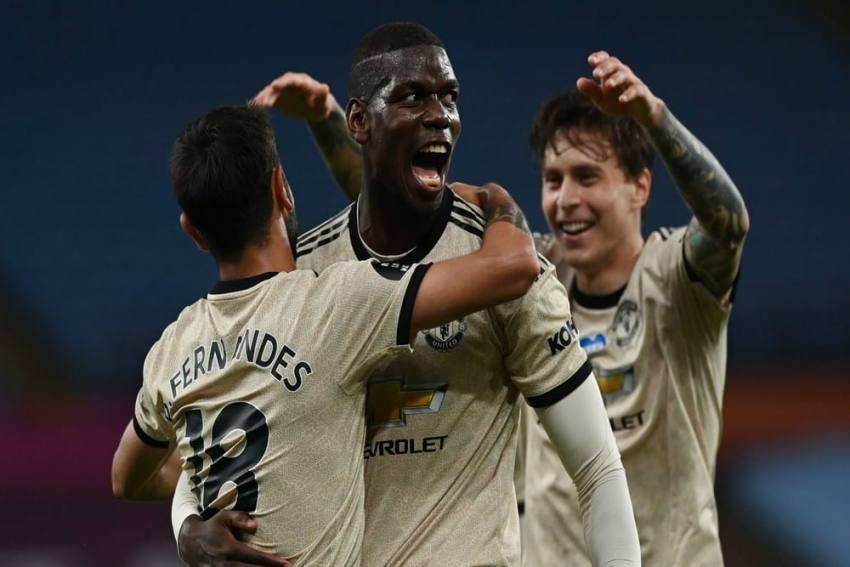 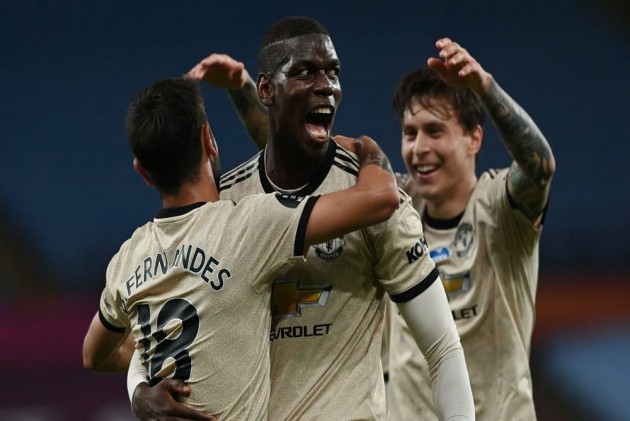 Ole Gunnar Solskjaer's side became the first in the division's history to win four successive matches by a margin of three goals or more as they extended their unbeaten run to 17 games in all competitions.

Bruno Fernandes set them on their way by converting a controversial penalty, before Mason Greenwood took his tally to four goals in three games prior to the break.

Pogba picked out the bottom corner of the net from a Fernandes corner in the 58th minute to leave United one point outside the top four.

Despite United's recent purple patch, it was Villa who began brighter and Jack Grealish missed the target with a volley early on from a back-post Ezri Konza cross.

They came closer still when Trezeguet dispossessed Pogba and bent a low effort against the outside of the post.

Yet, a minute later, United had a penalty. Fernandes attempted a double drag-back to go beyond Konza, but his left leg came down into the defender, an act that referee Jon Moss deemed worthy of a spot-kick.

The contentious decision stood after a VAR review and it was Fernandes, rather than Marcus Rashford, who stepped up to slot home United's record-equalling 13th Premier League penalty of the season.

Greenwood and Fernandes then both came close before the former continued his fine scoring streak by blasting home right-footed in first-half stoppage time.

Aaron Wan-Bissaka really should have added the third early in the second half with a header that missed the target, and although he could not register his first goal of the season, Pogba soon did.

Fernandes picked out the Frenchman on the edge of the box from a corner and the World Cup winner steered his effort inside the post.

What does it mean? Free-scoring United continue rich vein of form

Villa had good opportunities to open the scoring - and they may feel aggrieved at the manner in which United went ahead - but once Fernandes slotted in the penalty only one team looked like winning.

United are two points behind third-placed Chelsea and one behind Leicester City in fourth, and they still have to play the Foxes. In this form, it is hard to imagine them not finishing in the top four.

The impact January signing Fernandes has had on United is clear to see and this was another awesome display from the playmaker.

He has now had 28 goal involvements in 27 league goals this season with Sporting CP and United, scoring 15 and providing 13 assists.

England international Tyrone Mings was the latest target for Sky Sports pundit Roy Keane's ire at half-time, the ex-United captain ripping into the Villa defender for not closing down Greenwood.

Anyone who has seen Greenwood of late knows he possess a venomous shot from distance and Mings' inability to close the teenager down was emblematic of Villa's problems.

United will hope to make it 18 unbeaten against Southampton at Old Trafford on Monday, while Villa will see the visit of Crystal Palace on Sunday as a more realistic chance to pick up points.