Australia batsman Steve Smith starred once again during the Ashes but Lord's held its breath when he was struck by a Jofra Archer bouncer. 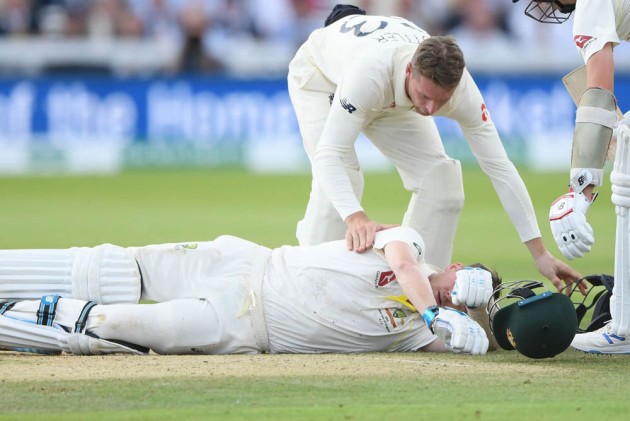 Lord's was enraptured by a gripping passage of Test match action as Smith sought to stand firm in face of a ferocious barrage from debutant England paceman Archer.

Having worn a lifting delivery on the forearm, Smith was left prone on the turf when he ducked into an Archer bouncer, prompting immediate concern.

Australia opener Hughes died after being struck on the back of his neck during a Sheffield Shield game in November 2014. David Warner, Travis Head, Nathan Lyon, Mitchell Starc and Brad Haddin – all members of the Australia touring party – played in that match at the SCG.

"You never like seeing your players get hit like that," Langer told a news conference. "There's obviously some pretty rough memories of a blow like that. So there's no fun in it."

Smith appeared frustrated to have to leave the field after a lengthy medical assessment but, after coming through concussion tests, he returned when Peter Siddle was out caught behind to Chris Woakes.

The same bowler removed Smith for 92 – comfortably the most significant contribution to Australia's 250 all out before England closed on 96 for four, a lead of 104.

"As soon as he got up in the medical room he was saying, 'I'm going okay'. The doctor said he had passed the concussion tests," Langer explained.

"As soon as he got back in the dressing room he was ready to go back out there again. These are like my sons. You're never going to put them in harm's way.

"He said, 'I can't get up on the [Lord's] honours board unless I'm out batting'. All he was concerned about was that he wasn't going to play his forward defence because his arm was hurting for his top-hand grip.

"I asked him privately two or three times and in front of the group and he said, 'All good, coach'. What else do you do?"

After avoiding a fractured arm and then passing the concussion tests, there was simply no stopping Steve Smith from returning to the crease! #Ashespic.twitter.com/0WlnZX0ZJR

Langer also paid tribute to a spell of fast bowling for the ages from Archer.

"I've got massive admiration for Jofra. I think he's an unbelievable athlete and an incredibly skilful bowler," he said.

"Test match cricket is hard work but his endurance was outstanding today – his skill, his pace. What an athlete and what a great player to have to promote Test cricket.

"To bowl 29 overs today, time will tell if it has an impact. We hope it does, like we do with all the England bowlers, like they would with our bowlers."

Australia will look to extend their 1-0 lead in the five-match series on Sunday but could have been in an even stronger position, having failed to review two lbw appeals against Rory Burns and the still-unbeaten Ben Stokes that would have gone in Nathan Lyon's favour.

"We're aware of it and we have to get better at it."