An own goal from Bernd Leno gave Everton a 1-0 win over Arsenal as they recorded their first Premier League away win over the Gunners since 1996. 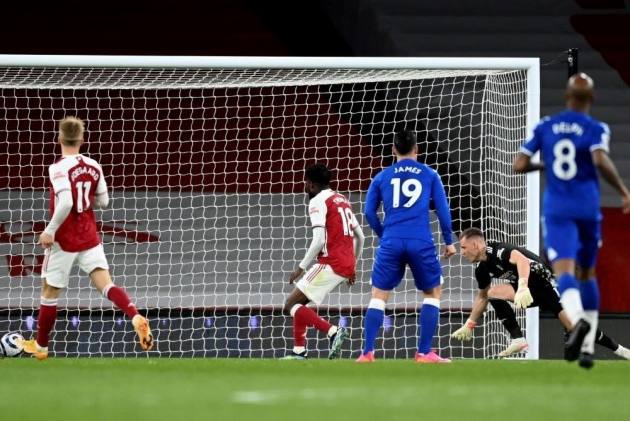 Everton boosted their hopes of a top-four finish and a place in next season's Champions League as Bernd Leno's own goal gave them a 1-0 win at Arsenal. (More Football News)

In a low-key Premier League encounter, the result was settled by a mistake from goalkeeper Leno when he allowed Richarlison's cross through his legs and diverted it into the net.

Arsenal had earlier seen a penalty chalked off after a VAR check for offside while Dani Ceballos brought a good save out of Jordan Pickford.

Everton's victory was their first in 25 league attempts (lost 20, drawn four) at Arsenal since a 2-1 win at the north London giants' former home Highbury in January 1996.

2 - Arsenal have scored an own goal in both league matches against Everton this season, the third time they have put the ball in their own net home and away against a side in a Premier League campaign (also 2011-12 vs Liverpool and 2008-09 vs Chelsea). Howler.

Arsenal fans protested outside Emirates Stadium against owner Stan Kroenke's role in the failed European Super League, and the first half lacked intensity.

The Gunners had the first meaningful attempt on goal when Bukayo Saka latched on to the ball in the box but saw his low effort comfortably saved by Pickford.

It was Everton who enjoyed the better of the remainder of the first half and Richarlison went close on the half hour after he shrugged off Pablo Mari, and Leno dived to beat away his shot across goal.

Gylfi Sigurdsson rattled the crossbar with a spectacular curling free-kick moments before half-time, and only a last-ditch block from home defender Rob Holding denied the Iceland international just after the break.

Arsenal were awarded a penalty when Ceballos went down in the box after a kick from Richarlison, but VAR deemed Nicolas Pepe was in an offside position in the build-up and the spot-kick was overruled.

The key moment came with 14 minutes left when Leno kneeled down to scoop up Richarlison's low cross, but he instead allowed the ball to squirm through his legs and directed it into the net.

Everton were indebted to Pickford for the points after a fine low diving stop in injury time to deny Arsenal substitute Gabriel Martinelli.

Victory means Everton stay eighth in the table, but they are only three points behind fourth-placed Chelsea having played the same number of games.

What does it mean? Double delight for Ancelotti

Everton completed their first league double over Arsenal since the 1985-86 season, as Carlo Ancelotti's side backed up a 2-1 win at Goodison Park in December with a narrow win in the 200th top-flight meeting between the sides.

Only Manchester City (12) have won more away games than Everton (10) in the Premier League this season, while this is the first time since 1986-87 that the Toffees have won 10 away games in a single league campaign.

The Gunners have now lost seven games at the Emirates in the Premier League this season; their most home defeats in a league campaign since 1992-93 (also seven).

Nketiah fails to step up

With Pierre-Emerick Aubameyang and Alexandre Lacazette missing through injury, the striking burden fell on the shoulders of Eddie Nketiah.

It weighed heavily on the Arsenal youngster who failed to register a shot on target and did little with his four touches inside the penalty area as the Gunners failed to score at home in the Premier League for the eighth time this season, twice as many as the previous four campaigns combined.

A mature performance from 23-year-old Ben Godfrey enhanced his reputation as Everton's former Norwich City player delivered a confident display at the heart of defence.

Godfrey made more clearances (five) than any other player on the pitch and his three tackles was only bettered by Lucas Digne (six). Godfrey was also calm on the ball, having completed more passes (46) than any other Everton player.

- This became the third fixture in English top-flight history to be played at least 200 times, and Everton are represented in the others too, facing both Aston Villa and Liverpool on 204 occasions.
- Arsenal have conceded an own goal in both meetings with Everton in the Premier League this season – the third time they have done so home and away against an opponent in the same campaign (also v Liverpool in 2011-12 and Chelsea in 2008-09).
- Saka made his 55th Premier League appearance for Arsenal - only Nicolas Anelka (58) and Cesc Fabregas (104) have made more for Arsenal in the competition as a teenager, with Saka equalling Theo Walcott's total in this game.

Arsenal head to Villarreal in the first leg of their Europa League semi-final next Thursday, while Everton host Aston Villa in the Premier League on Saturday, May 1.