Mohsin Al Ghassani scored the all-important goal in the 33rd minute at the Sultan Qaboos Sports Complex Stadium as Oman beat India for the second time in the 2022 FIFA World Cup qualification campaign. 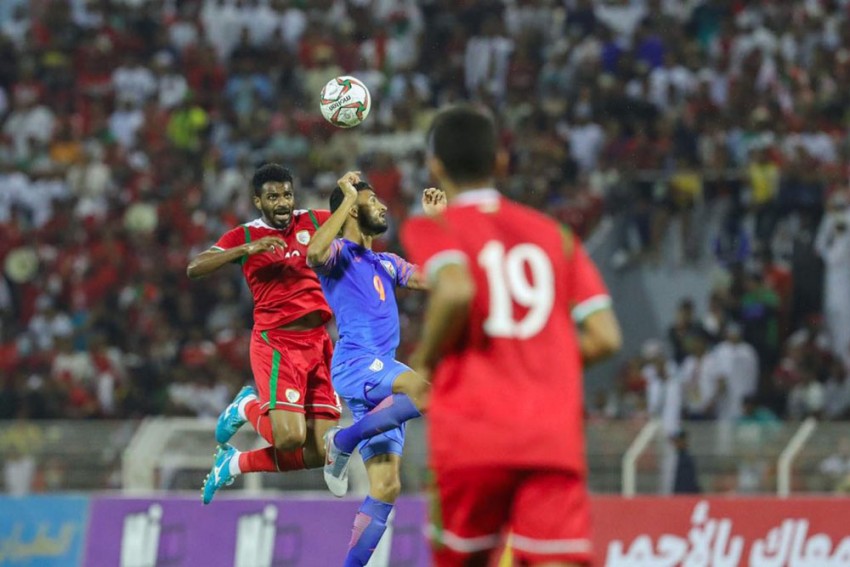 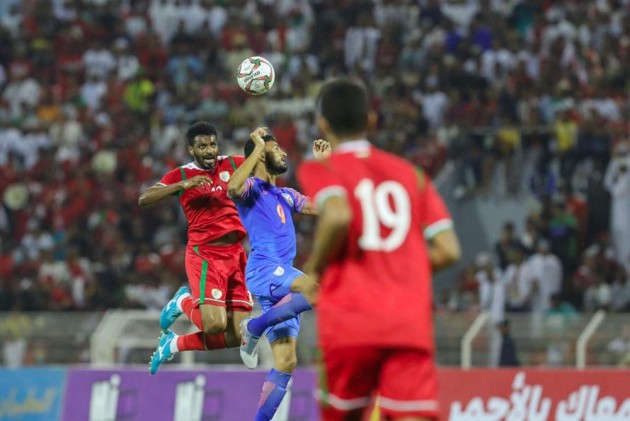 The Indian football team was on Tuesday virtually knocked out of the 2022 World Cup qualifying round after losing 0-1 to Oman.

Mohsin Al Ghassani scored the all-important goal in the 33rd minute at the Sultan Qaboos Sports Complex Stadium as Oman beat India for the second time in the campaign.

Oman had defeated India 2-1 in the first leg in September in Guwahati.

With a nine point gap with the second-place team (Oman) in the group table, India are almost out of reckoning for a third round berth. They have only three more matches -- maximum nine points -- left to play in this second round of the qualifiers.

Even the runners-up team is not guaranteed an automatic spot for the third round of the qualifiers.

The Indian team is, however, still in the hunt for a third round berth for the 2023 Asian Cup qualifiers.

This campaign is also a joint qualifying round for the 2023 Asian Cup and the third-placed teams and the best four fourth placed teams from the eight groups automatically get a spot in the third round of the qualifiers of the continental championships.

Earlier, head coach Igor Stimac made three changes to his side that drew Afghanistan 1-1 in Dushanbe on November 14 with Manvir Singh, Farukh Choudhary and Nishu Kumar coming in for Pritam Kotal, Mandar Rao Desai and Sahal Abdul Samad.

India were, however, lucky not to have conceded a goal in the seventh minute when Mohsin Al Ghassani shot over the bar from the penalty spot.

Ghassani himself earned the spot kick after a clumsy challenge inside the Indian box by Rahul Bheke who was beaten on pace by Omani striker.

Ghassani later made amends of his mistake as he fired home in the 33rd minute past Indian goalkeeper Gurpreet Singh Sandhu after a beautiful defence-splitting through pass by Mohsin Johar Al Khaldi.

Oman had more of the ball possession in the first half but they had few clear chances. Ahmed Al Kaabi got a free header in the 27th minute but sent the ball over the bar from a corner kick.

India had few raids at the opposition goal but could not pose any threat to the Omani goalkeeper Ali Al Habsi.

India made three substitutions in the first half with Vinit Rai coming in for Pranoy Halder who was booked in the 26th minute while an injury to central defender Adil Khan led to Anas Edathodika taking his place.

India played better in the second half with a lot of ball possession and attack at the opposition citadel but a clear chance eluded them.

Oman nearly doubled their lead in the 64th minute but Indian goalkeeper Gurpreet dived full length to his left to block an Al Khaldi free kick.

All of India's last three matches will be played next year -- against Qatar (at home on March 26), Bangladesh (away, June 4) and Afghanistan (at home, June 9).