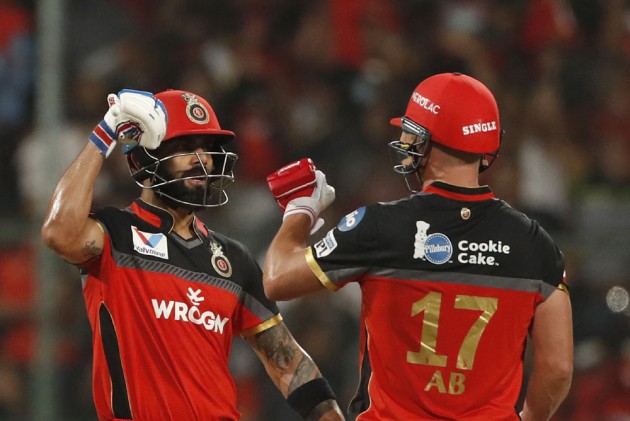 Finally, there's laughter in the Royal Challengers Bangalore (RCB) camp. After six straight defeats, the Bengaluru-based team got a taste of victory after defeating Kings XI Punjab by eight wickets on Saturday at Mohali. Skipper Virat Kohli played a well-measured 53-ball knock for 67 runs and was involved in an 85-run stand with AB de Villiers (59 not out off 38) for the second wicket to lay the foundation for the chase.

Earlier, Kohli won the toss and put KXIP into bat. Punjab opener Chris Gayle hit an unbeaten 99 of 64 balls, but the host failed to reach the magical 200-run mark, managing only 173/4.

This is the first defeat in eight games for KXIP in Mohali with the last one coming against the Gujarat Lions in 2017.

11:38 PM IST: And R Ashwin brings Sarfaraz Khan into the attack. It's a big gamble. First over in IPL for Sarfaraz, and the first ball goes for a four as AB de Villiers hits it straight, to the boundary. Sam Curran still has one over left. ABD follows it up with a double and RCB win by eight wickets. First win for Virat Kohli & Co.

11:35 PM IST: Mohammed Shami on. AB de Villiers takes a single off the first ball. A single to rotate the strike. A dot ball. 17 needed from 10. A full toss and goes for a four, straight over the bowler's head. 13 needed from eight. A single. 12 from seven. AB de Villiers hits the last ball for a six, over deep fine leg boundary. RCB-168/2. Six needed from six.

11:29 PM IST: Andrew Tye on with his last over. Marcus Stoinis hits the first two balls for fours, then Murugan Ashwin drops the Aussie. AB de Villiers hits the next ball for a six over extra cover. A very, very tight single and ABD brings up his fifty, in 35 balls with the help of five fours and that six. 18 from the over. RCB-152/2 after 18 overs. They need 20 from 12. Tye's figures - 0/40.

10:56 PM IST: Nine runs from Andre Tye's second over. Virat Kohli hits the third ball for a four.  But AB de Villiers survives a run-out chance off he next ball. RCB-107/1 after 12 runs. They need another 67 runs from 48 balls.

10:46 PM IST: KL Rahul lets slip a ball for a four at long-off. And a boundary to start for Murugan Ashwin. It was followed by two singles and a double. Eight runs from the over. RCB-88/1 after 10 overs.

10:37 PM IST: Murugan Ashwin produces a very good over. Three singles from his second over. RCB-74-1 after eight over. They need 100 runs from 72 balls. In the previous over, Andre Tye leaked eight runs from his first over with AB de Villiers hitting the last ball for a four.

10:18 PM IST: Ravichandran Ashwin strikes in his first over. He had Parthiv Patel caught at long-off bu Mayank Agarwal. FoW-43/1 (3.5 Over). Patel made 19 off nine. AB de Villiers is the new man. Eight runs from the fourth over. RCB need 130 runs more.

10:14 PM IST: Virat Kohli hits the first ball of the over for a four. Sublime timing and through deep midwicket. Then, Parthiv Patel finishes off with back-to-back fours. Thus Sam Curran leaks 15 runs from his second over. RCB-36/0 after three overs.

10:09 PM IST: Mohammed Shami on and Virat Kohli hits the pacer for back-to-back fours off the first two balls. A single and Parthiv Patel hits the fourth for another four. Two more singles. 15 runs from the over. RCB-21/0 after two overs. They need another 153 runs.

9:45 PM IST: Last over. Three singles, then Chris Gayle hits the four for a four. One hit away from his seventh IPL hundred. A dot ball. And Gayle limbers up. A four to end the innings, but Gayle remains not out on 99. 11 runs from the over. Mohammed Siraj's figures: 1/54. KXIP 173/4.

9:41 PM IST: Virat Kohli drops a sitter, to give a life to Chris Gayle. The KXIP opener lofts over mid on and Kohli, running in, gets the ball into his lap and onto the ground. That happened off the fourth ball, and Gayle hits the last ball for a six over deep mid wicket. Mighty. 16 runs from the over. KXIP-162/4 after 19 overs. Gayle on 90.

9:16 PM IST: Yuzvendra Chahal completes his spell. Eight runs, including a four off the fourth ball hit by Chris Gayle, from his last over. KXIP-122/4 after 15 overs. Gayle is unbeaten on 66 from 46.

9:12 PM IST: Sam Curran lasts only three balls as Moeen Ali gets his first wicket. Traps LBW off the fifth ball of the 14th over. Ali finishes his spell for 1/19. Brilliant bowling. KXIP-114/4. 24 runs and two wickets in the last over as RCB fight back. Mandeep Singh is the new man.

9:05 PM IST: Again, six and followed by a wicket. Sarfaraz Khan hits Mohammed Siraj off the fifth ball, and get out. Caught behind. FoW-110/3 after 13 overs. Sarfaraz made 15 from 13 balls. Eigth runs from the over.

8:56 PM IST: Nine runs from Yuzvendra Chahal's third over, which includes a four, hit by Sarfaraz Khan off the fourth ball. KXIP-99/2 after 11 overs.

8:52 PM IST:Moen Ali on with his second over. Just four runs -- a wide and three singles. KXIP-90/2 after 10 overs. Thirty runs and two wickets in the last four overs.

8:48 PM IST: Fifty for Chris Gayle, in 28 balls with six fours and three sixes, with a single off the first ball. And you don't hit Yuzvendra Chahal for a six. Just like KL Rahul, Mayank Agarwal departs soon after hitting a six. Off-stump disturbed. FoW-86/2 (8.5 Over). Sarfaraz Khan is the new man for Punjab. Nine runs from it. KXIP-86/2 after nine overs.

Earlier, Moeen Ali leaked eight runs from his first over.

8:40 PM IST: Yuzvendra Chahal gets his first over, and gets hit for a six by KL Rahul. Straight. But Chahal hits back. Parthiv Patel stumps Rahul. FoW-66/1 (6.2 Over). Then, Chris Gayle intimidates Chahal for celebrating the wicket, in good homour. Mayank Agarwal joins Gayle in the centre. Nine runs from the over. KXIP-69/1 after seven overs.

8:32 PM IST: Massive over. Chris Gayle destroys Mohammed Siraj: 4,6,4,0,6,4 for 24 runs. Gayle is on 48 off 23. It seems like the Universe Boss has some unfinished business with his former team. KXIP-60/0 after six overs. Virat Kohli is scratching his head. Time out.

8:26 PM IST: Umesh Yadav continues with his third over. 10 runs from it, including two back-to-back fours off the first two balls. KXIP-36/0 after five overs.

8:20 PM IST: Another four from Chris Gayle, to long on fence. It spoils Navdeep Saini's otherwise brilliant over. KXIP-26/0 after four overs.

8:16 PM IST: Big over. 14 runs from it as Chris Gayle gets into the act. He hits the first ball for a four then follows it up with a monster six, over long on. Umesh Yadav did well to deny restrict Gayle though. A double and two more singles. KXIP-21/0 after three overs.

8:10 PM IST: Navdeep Saini shares the new ball with Umesh Yadav. After three dot balls, Chris Gayle hits the fourth ball for a four, thick inside edge. A single more and five runs from the over. KXIP-7/0 after two overs.

8:04 PM IST: Umesh Yadav starts the proceedings with a very good over. Only two runs. KL Rahul takes a single off the first ball, then Chris Gayle negotiated the five remaining deliveries for a single, coming off the last ball.

7:32 PM IST: Royal Challengers Bangalore have won the toss and have opted to field.