'Spare A Thought For Bowlers' 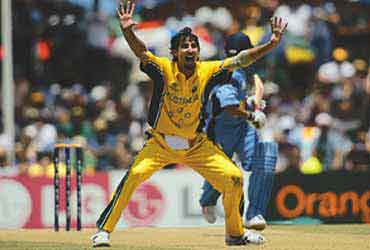 As the tri-series has flowed, bowlers and their ability is increasingly under scope. Wickets have been designed to suit the batsmen and more and more of them are able to hit through the line. They also are using a lot of aerial shots, especially in the first 15 overs. There are far more sixes hit today than it was before.

Batsmen have tactically moved on, they seem to understand the risk-reward situation better. Once they are off to a 80-90 run start in the first 15 overs, it is very difficult for bowlers to make a comeback.

The outfields are shorter too and ropes are flopped around the 75-metre mark these days. I remember during my times the expanse of the ground was far bigger. It is not getting any better for bowlers. Do they stand no chance whatsoever in Australia and in conditions such as the sub-continent's?

I think tactically the teams have struggled to come to terms with the field restrictions in the one-day arena.

In the first 15 overs only two men are outside and thereafter four fielders, compulsorily, need to remain inside the circle all the time. Teams have thus shied from going for total options of either full attack or full defence. The mindset has also been such that teams avoid all-out attack for the fear they just might open the floodgates and runs would flow.

They understand one-day cricket is usually a close affair and it takes only two or three overs to completely turn upside down a razor-edge game.So what has been happening that even if teams have lost early wickets, they have runs on the board and they are able to be in a position in the slog overs where 80-90 runs are consistently being scored.

Bowlers hardly seem to be in a situation where they are bowling to number seven or eight or nine batsmen in the final overs. The message is -- even if conditions in limited overs are heavily loaded in favour of batsmen, the bowlers must try to take wickets at all stages.

All the successful bowlers in one-day cricket -- look at Muttiah Muralitharan, Shane Warne, Glenn McGrath and even Jason Gillespie -- they go reasonably well in limited overs because they are plotting batsmen's dismissal rather than just come off the field with a none-for-40 figures.

The best bowler I faced in one-day cricket was Joel Garner because of his height and the yorkers he could bowl -- Wasim Akram was also very difficult to get past.

Bowlers must learn to take more risks as batsmen have done. Batsmen now instinctively know what are the areas where run-making is easier. They are using the area behind them far more effectively with reverse sweeps and chipped shots.

Bowlers too need to utilise the options they have -- like the liberty to bowl bouncers which should be well-directed and hopefully produce catches for the two fielders prowling on the fence behind square leg.

Is it time for teams to go into a one-day arena with five specialist bowlers? I am not too sure about it. Such has been the nature of the game that there is no guarantee even a specialist bowler would not go less than 70 or 80 runs in his spell. Mixed bowlers have always had a role in one-day cricket.

Is it time to dispense with spin bowlers because batsmen are all the time milking them in the middle overs? I am not too sure about that also. Spinners have a huge role to play in one-day cricket. They can have very good influence, even in the slog overs if they are good.

One area where bowlers could be helped is the field placements which coaches devise in the dressing room. With all the aid of the computers, it is not too difficult to know the strong sides of the Haydens and Dravids, Gilchrists and Gangulys

It is easy to pinpoint the areas where they hit boundaries and how to plug them. Field placements is increasingly becoming an area where sides need to pay close attention.

The matter of all this exercise is just to see if bowlers can be competitive in one-day cricket. In England they are because the ball swings and seams in the early overs and bowlers have a slight hold on the batsmen.

In our conditions the batsmen have a license to go for his shots from early on. Sometimes it is not too bad if conditions are little in favour of the bowlers because it could just make a game really competitive.

But in all this the one thing most of us miss is the fact that one-day cricket is designed to produce big shots and heavy scores. The game has been designed for good run making -- that is why you have all those field restrictions and curbs on the bowlers.

It is not meant to help bowlers, it was never meant to be. We all have racked our minds on the changes which could be introduced in one-day cricket but have always stopped short because shifting the focus subtly for bowlers would hurt the very foundation of one-day cricket -- which is to see big hits and big scores.

One-day cricket has a specific role for the health of the game and seeing those long queues outside the gates of a stadium is proof it is doing alright.