It's Nawaz Sharif's decision to continue the judicial proceedings against Musharraf that remain at the heart of the current crisis, the ultimate beneficiary of which would be the military establishment 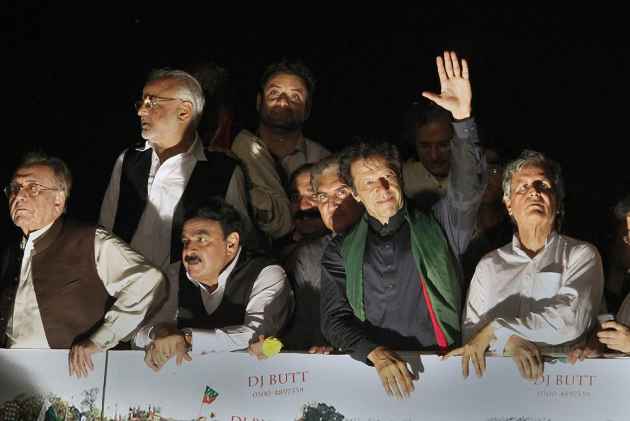 “The man’s undone forever; for if Hector break not his neck in the combat, he’ll break it himself in vain-glory”

Things are still extremely fluid in Islamabad as we go to press but whether the ultimate outcome of the protests is a soft coup d’état, the elected government weathering the storm or something in between, it is evident that for now the civil-military balance in Pakistan has gone through a hard reset in favour of the boots. There is little doubt that the ultimate beneficiary of the morass created by a power hungry cricketer-turned-politician and a delusional cleric is the military establishment. It is also evident that the wheels within wheels of the establishment have been prodding the protestors all along and also threw them a lifeline when their hubris bubble burst on live television.

The false prophet of change, Imran Khan, got thrashed in political combat fair and square, and was about to break himself in vainglory were it not for those who have egged him on since 1996 stepped in to save his face and sinking political fortunes. Over the last week, Imran Khan’s Pakistan Tehreek-e-Insaaf (PTI) and Allama Dr Tahirul Qadri’s Pakistan Awami Tehrik (PAT) ran out of political options and steam. It was surreal to see Imran Khan self-destruct on prime time television with his crude antics. The man had the audacity to go home for naps, showers and televised brunches, in the midst of the dharna. It was a tasteless and crude joke in the name of revolutionary change and the so-called second 'independence' for Pakistanis. The crowds, repulsed by the callousness of their leader, started thinning.

Running out of options, Imran Khan frenziedly called celebrity singers and cricketers for help. In a most pathetic manner, the PTI chief then called, as an afterthought, upon the workers and peasants of Pakistan to join his travesty of a revolution. Imran Khan’s reductionist reasoning is a disgrace to anything remotely associated with revolutionary thought. An unconcealed lust for power, born-again Islamist sloganeering and looking for a shortcut to political victory have defined his tomfoolery since he descended upon Islamabad this time around. He virtually declared his intellectual bankruptcy from his own stage, challenging the incumbents to a physical duel. Disjointed raving, punctuated by music, has been the name of an increasingly desperate Imran Khan’s zero-sum game. His cohort, Dr Qadri, sounded more coherent, despite his messianic delusions, but did not fare much better in numbers. The double trouble was visibly fizzling out before achieving what they had been tasked to do. But just before the whole shebang could tank, reinforcements and logistical support miraculously arrived. The powers that be were not done with democratically elected Prime Minister Nawaz Sharif quite yet; he had to be shaken, not just stirred.

Under a veneer of comfort between PM Nawaz Sharif and Chief of Army Staff (COAS) General Raheel Sharif, whom he had appointed not that long ago, the chasm between the civilian dispensation and the military has been widening by the day. The PM’s decision to continue the judicial proceedings against the former military dictator General Pervez Musharraf remains at the heart of the standoff. After receiving one safe exit in 2008, General Musharraf, the arrogant man that he is, blundered back into Pakistan even to his own outfit’s annoyance and advice to the contrary. Once he was in Pakistan and facing a trial, at least some parts of the  institution he led once stood by his side. His former outfit does not like the optics of a dictator in the dock. Springing Musharraf from his house arrest seems to be a priority for the establishment and, after failing to make any headway with the Pakistan Muslim League-Nawaz (PML-N), it seems to have chosen to inflict some shock treatment.

Another decision by PM Nawaz Sharif that ruffled the military feathers was appointing Khawaja Muhammad Asif as the defence minister. The defence minister’s speech made in the National Assembly’s 2006 budget session, critiquing the Musharraf junta, had not been forgotten. The establishment-allied media went after Khawaja Asif with a vengeance and played that speech over and over during the PML-N-military standoff this past April. No matter how many petitions the defence minister files on behalf of the military against the private television channel that had blamed the intelligence agencies for a hit against its leading anchor, he has not been forgiven for standing up to dictator Musharraf and his coterie.

In addition to domestic squabbles, the course PM Nawaz Sharif is trying to chart vis-à-vis our neighbours, especially India, has not gone down well with the security establishment. The latter remains unwilling to give up its monopoly over defining the national interest and formulating national security and foreign policies. PM Sharif’s conciliatory tone and tenor during his visit to attend his Indian counterpart’s inauguration and declarations to revive the peace process and trade drew the establishment’s immense ire. While PM Sharif remains rather reticent about his Afghanistan policy, his pledge to pursue an Afghan-led peace process is not what the establishment has in mind for the western neighbour.

What the PML-N faces today is but another link in the series of obstacles that the security establishment has been raising since the Pakistan People’s Party (PPP) assumed power in 2008. Like the orchestrated uproar over the Kerry-Lugar-Berman Act and the fabricated Memogate affair against the PPP, the current protests are designed to force the civilian incumbents to back off from what the military establishment considers its domain. The PTI/PAT tumult was created artificially so that the establishment regains the ground lost since 2008 and positions itself as the ultimate arbiter of who gets to rule Islamabad.

The chief apologist of the Taliban joining hands with the ostensible Taliban opponent, Dr Qadri, to storm Parliament and the PM House is not a coincidence. The tactics, goals and at times even words of the destructive duo seem to follow a single script. The establishment has one eye on Afghanistan and appears to believe that a quasi-Egyptian model would be palatable to the western powers as the US drawdown from Afghanistan approaches. Toppling or weakening an elected government would likely unite the democratic forces against the establishment’s protégés. The after-dharna phase would not be a cakewalk for the latter. The PML-N, PPP and the Pashtun and Baloch nationalist parties must close ranks for democracy to survive this hard reset and to let both the puppets and puppeteers self-destruct in their vainglory.

Dr Mohammad Taqi is a regular columnist for the Daily Times of Pakistan where this piece first appeared. and he tweets @mazdaki