So What Happened Exactly?

No body knows for sure, but it seems it was a dispute over Dipendra's marriage-plans. 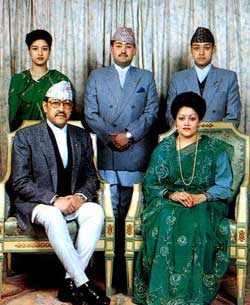 While stories have done the rounds, no body yet knows what led to the biggest massacre of royalty since the Romanovs were put to death by order of Lenin in 1918 during the Russian civil war. But what differentiates this from that is the alleged killer - the heir to the throne, the Crown Prince, Dipendra.

The sequence of events remains sketchy. Though the deaths and the succession was announced around 17 hours after the massacre, no details have yet emerged.

Nepalese prime minister Girija Prasad Koirala announced after the funeral that a total of eight members of the royal family had been killed in the apparent palace massacre that has rocked the nation.

In a statement broadcast on state television and radio, Koirala expressed his deep shock at the killings but failed to clarify the precise circumstances surrounding the shocking events of yesterday night at the Narayanhity palace.

"I was shocked like everyone else in Nepal when I heard the news," Koirala said after attending the state funeral of King Birendra, Queen Aishwarya, Prince Nirajan, Princess Shruti and one of the King's cousins.

The prime minister said two of the King's sisters and one of their husbands had also died.

"The truth about the whole thing will be known to all soon," he added.

Though Princess Shruti, daughter of King Birendra, was killed in the incident, her husband, Gorakh Shamsher Jung Bahadur Rana, who was also injured, has survived.

"If he lives, he will be the only one who will be able to tell us what transpired on that tragic night," said a senior Nepali journalist. And that, perhaps, is what Koirala alluded to.

The Grapevine
Early reports from Kathmandu speak of a dispute at a royal dinner late on Friday night to discuss the 29-year old Crown Prince Dipendra's marriage. Apparently the Prince was inebriated at the dinner and was told to go and lie down.

He left and reportedly returned with two automatic rifles and sprayed the room with bullets.He left again to go and dress up in military fatigues.

When he was confronted by palace officials, he is said to shot himself in the temple. Theories abound that he may have been shot by the palace guards, and fingers have been pointed at the king's aide-de-camp.

Astrology and Choice of Bride
There are conflicting stories. One version has it that the Prince may well have been under considerable pressure to abandon or delay his marriage plans. There had been recent stories in the Nepalese press about astrologers having advised that he should not be allowed to marry or have children until he reached the age of 35.

The seers had apparently warned that if the directive was not followed, the king would die. Dipendra would have turned 30 on June 27.

The dispute arose out of that, says one group of speculators.

While others insist that it had to do with Queen Aishwarya objecting to his choice of bride. There had been hushed whispered rumours that the prince wanted to marry Devyani Rana, daughter of former minister Pashupati Sumsher J B Rana, and the niece of Congress general secretary Madhavrao Scindia. The palace grapevine had it that his mother wanted the prince to marry a girl from the imperial Shah clan.

The King is believed to have threatened Prince Dipendra that he would be bypassed in the line of succession in favour of his younger brother if he did not bow to the wishes of the Queen on the choice of his bride.

Earlier, though there had been rumours, it was seen as a minor family tiff with no outward signs of internal divisions in the royal family, and no suggestion that there was any kind of a rift between King Birendra and his son, Crown Prince Dipendra, before the palace massacre on Friday.Nobody in their wildest imagination thought of such an end to a domestic dispute.