So Do We Want A UCC?

Yes, you say? Well, there seems only one way: Every aspect of the personal laws must be examined in the light of constitutional guarantees to every Indian: equality, justice, right to life. 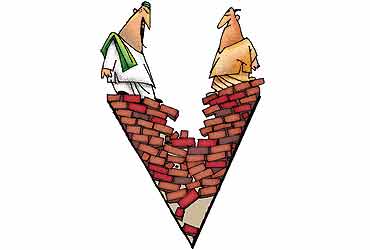 After an argument, some wise man once wrote, each protagonist walks away convinced that all other minds were firmly closed. I found confirmation of this after a workshop I attended. As it degenerated into a shouting match, I could not even tell which side I was on. No one who was yelling had listened to a word anyone else was saying: so convinced were we all that we were right. Naturally, I was sure I had been open-minded. But going home with a friend, I realised as she spoke that I had not heard anything she had said earlier. I still did not agree with her. But away from the ruckus, at least I understood her position.

Only then did I truly understand how difficult a subject the workshop had tackled. So many people talk easily about a Uniform Civil Code. But when you sit down to discuss one, you're immediately caught in a thicket whose ferociously tangled state few of us comprehend.

The first problem comes from trying to remove politics from the debate. So charged has the atmosphere become that any discussion, any opinion at all, on a UCC is viewed through political lenses. If you express even faint reservations about one, you're a reactionary -- or that nasty breed, a pseudo-secularist -- who is dividing India. If you're just as faintly positive, you are a Hindutvawadi, a Muslim hater no doubt, and you are also bent on dividing India. And don't sit on the fence: then both sides abuse you.

But what's debate without sharply differing views? Where will solutions to the UCC tangle come from if some few don't brave the abuse, the differing views, and get down to addressing the issue? That's why a small group in Pune tried a few years ago to draft a UCC. They were whom I went to hear that day.

In their attempt, they ran smack into the next great problem: making sense of the unbelievable mess our personal laws are. At every level, in every area, there are differences by religion. If Hindus are the exception to one rule, Muslims are to another, Christians to a third and Parsis, a fourth. Or some combination forms the exception here; another combination there. What "uniform" can mean in this situation, I haven't the faintest idea. How is it possible, from innumerable exceptions and special cases, to extract the holy grail of a UCC?

But you want examples, no doubt. Chew on a couple.

You have two, and only two, grandchildren. One is the son of your son, the other the son of your daughter. Tragedy strikes one June afternoon: during the annual family vacation on Pulicat Lake, your son and daughter both fall off the boat and drown. Of course the news devastates you. You waste away in grief. A month later, you too are dead.

Unfortunately, you have not left a will. Your grandsons are your only heirs. How will your property be divided between them?

Because if you are a Muslim or a Hindu, your son's son gets preference over your daughter's son, in deciding who inherits your unwilled estate. That is, these two faiths prefer a son's line of inheritance. The laws for Parsis and Christians, on the other hand, make no distinction between the two kinds of grandchildren. If you followed one of those faiths, both grandsons would get an equal share of your estate.

Got that? Did that surprise you? Leave you cold? Simple enough, you say? Whatever it is, let's try one more example.

You have a son, a daughter and a devoted husband. Your parents are aging, but in good health. Tragedy strikes one wintry December night. Driving home from a hard day's work, you drop off to sleep at the wheel and crash into a wall on Tyagaraj Marg. Your car is totalled. You are dead on the spot.

Unfortunately again, you have left no will. Who inherits your car-less estate?

No surprise: again, that depends on your faith. Among Muslims and Parsis, five basic relationships -- mother, father, son, daughter and spouse -- are never "excluded" from inheriting. That is, all of them are entitled to and will get a share of your property. There is, however, some difference between the two religions in the size of the share each relation is entitled to. I won't even touch upon that difference here. Leave it at this: each of your five close family members will get a share.

But if you're Christian, the fact that you have children automatically excludes both your parents. They get nothing. Then again, had you been a childless Christian, your father would not be excluded: he would inherit. Though your poor mother would remain excluded in that case too.

Finally, if you're Hindu, the situation is different again. Your father is excluded from a share of your property. Your mother is not. She will inherit.

Got all that? Believe me: this is only the tip of a monstrous iceberg. These intricate distinctions go on and on, through every aspect of inheritance law. Marriage, divorce and adoption laws are riven with such stuff as well.

Why have we got ourselves into this bizarre mess? Because we have pandered to every possible tradition that's followed in our country, reflecting each one in our laws. As a result, we have today the fierce knot of rules and exceptions that pass as our personal laws.

So when this enormous debate has to begin somewhere, if this knot is ever to be untied, we need to ask, again: what can a "uniform" code possibly mean?

What can it mean, when in almost any aspect of personal law, drafting a UCC will mean stepping on toes marinated in tradition and religion? When aspects of existing laws for one religion are diametrically different from those for others?

What's that you say: simply choose the "best" aspects of our different personal laws and slap them together into a UCC? Fine, so take just example #2 above, where your parents survive you. If Hindus exclude your father, Christians exclude both (but only your mother if you had no kids), while Muslims and Parsis exclude neither, on what grounds can one of these options be termed "best"? Go ahead, tell me: which one is "best"?

When you tackle such questions, you find yourself up against a third major problem. Everyone is smugly sure that their own religion is the finest in existence. So a uniform code, they say to themselves and sometimes more publicly, need mean nothing other than -- surprise! -- their own laws.

On a talk show I watched not long ago, a Parsi man asked sadly: why can't every other religion have rules as fair as mine does, rules that treat men and women just the same? How much happier the world would be! He fumed in silence when reminded that Parsis draw a clear distinction between men who marry outside the religion and women who do. The men's children retain inheritance and other rights, the women's retain none.

Similarly, a Muslim at the workshop I attended told us that unlike in other religions, laws in Islam come straight from the Creator himself. They are based on "revelation, not reason." Thus, he said, they are infallible. Being so, who could possibly argue with them?

Now why a Creator would distinguish between a son's son and a daughter's son beats me, but never mind. Because every religion encourages its faithful to feel superior to every other like this.

And there's one more thing that complicates the UCC debate: the notion that our personal laws "favour" one religion. Really? So I'd like to know, in just the two examples I cited above, how the law "favours" Muslims over others. Go ahead, tell me: how are Muslims "favoured"? Or anyone?

Spreading the ignorant lie that the personal laws favour Muslims is no way to achieve the consensus that a UCC will have to be. So it seems to me that those who paint such a picture don't really want a UCC. They only want to hold on to something they can fling at Muslims, portray them as stubborn backward thinkers. Not the best way to start a debate, but certainly the
best way to get Muslim backs up.

To anyone who takes the time to look, the truth is clear. Overall, the personal laws "favour" nobody. They are just an all round mess.

So do we want a UCC? Yes, you say? Well, there seems only one way to see through this crazy fog. Every aspect of the personal laws must be examined in the light of constitutional guarantees to every Indian: equality, justice, right to life. Laws that fail to uphold these basics must be thrown away. That is, going back to my two examples, we cannot allow inheritance laws that make a distinction between agnate and cognate, or between mothers and fathers.

This must happen whether the laws are based on traditions or not. If we have traditions that lead to injustice and discrimination -- and too many of ours do just that -- the faster they are thrown on the dung heap they belong on, the better. Often, the best way to reform is to actually change our laws.

Not easy, but that's the spirit the Pune group brought to their efforts. It's why the man who led their work, S P Sathe, wrote an article about the experience with this interesting reflection: a UCC need not be "a common law, but different personal laws based on uniform principles of equality of sexes and liberty for the individual".

I'll take that, thanks. Because I really don't care, don't want to care, what "agnate" is. Nor that it is distinct from "cognate".

Dilip D'Souza, among very many other things, is the recent winner of the fourth Outlook/Picador India Non-Fiction Competition. This article was first published in 2003, but it would be obvious that it remains as, if not more, relevant today. For more articles on the UCC from our archives, please click on this link and follow the links under Also See on the RHS (Right Hand Side) bar.