Smoother Than One Thought 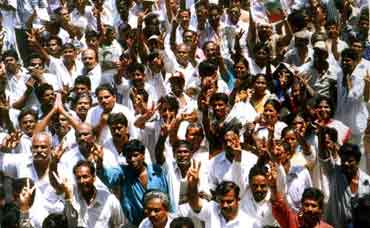 In the end there was no constitutional crisis as feared. The Tamil Nadu governor, Fathima Beevi, administered the oath of office to J. Jayalalitha without any of the drama that was expected to be played out. As expected, usual noises were made -- with the BJP and its NDA allies criticising and her allies stoutly defending the action as constitutional and reflective of respect to people's verdict.

Earlier, BJP president Jana Krishnamurthy told reporters here that Jayalalitha couldnot become chief minister even if she was elected leader of AIADMK legislature party until all cases against her are cleared.

"Even if Jayalalitha is elected leader of the legislature party taking advantage of the law that a person can become chief minister before getting elected as MLA, she has to appeal to the high court to set aside the appeal made in the lower court. And till cleared, she cannot be chief minister," he had said.

Meanwhile, NDA convener Shri George Fernandes said in Patna that "if a person convicted of corruption is invited to form government, I don't know what would become of Indian democracy."

But congress hailed the action of Tamil Nadu governor saying it saw "no constitutional hurdle" in Jayalalitha becoming the chief minister.

In Patna, Laloo Prasad adav said the governor's decision to administer oath of office and secrecy to jayalalitha was "a respect for people's verdict". Yesterday, Laloo had demanded the resignation of Vajpayee's NDA government, saying it had "lost" people's mandate.

Stating that results for the assembly elections should be held as a referendum on the style of functioning of the Vajpayee government, Yadav had told reporters that when 13 crore voters decided to go for "secular" governments, the "exposed" NDA had no right to continue.

He congratulated AIADMK leader J Jayalalitha and CPI(M)leader Buddhadev Bhattacharjee on their victory and also hailed the "secular force" coming to power in Kerala.

But putting up a brave front following the rout of two of its allies, the NDA brushed aside suggestion that the outcome of the assembly polls would adversely affect the stability of the coalition at the centre.

"Had the result gone decisively in favour of the third-ront, it could have affected the NDA comprising partners which were earlier part of such a front," highly-placed NDA sources said.

Parties like telugu desam and dmk, which were part of the united front, could have thought of moving out of NDA if the third front had been strengthened, they said, adding that this had not happened, to the benefit of the existing set up at the centre.

The assembly election results showed that the polity continued to be bipolar with Congress being the main adversary of ruling NDA and that the results were "on expected lines" since the NDA was not expected to perform well in these states due to various factors, the sources said.

On the result of Shahjehanpur lok sabha bye election in Uttar Pradesh, the sources said it would have been a matter of concern to BJP had the seat been won by the congress which had held it. They felt a "weak" BJP candidate was among the reasons for not not winning the seat.

A euphoric congress president Sonia Gandhi and other opposition parties said the outcome of the elections reflected on the performance of the Vajpayee government, but the prime minister claimed the results were on expected lines.

Congrees and BJP lost their hold on Shahjehanpur and Tiruchirappalli parliamentary seats in Uttar Pradesh and Tamil Nadu respectively while CPI won by a comfortable margin in the third lok sabha bypoll in West Bengal's Midnapore constituency.

Congress also surrendered the Banamalipur assembly seat in Tripura to CPI, a constituent of state's ruling left front, while Samata Party managed to stem the trend retaining Kshetrigao assembly consituency in Manipur, by-elections for which were held along with the three lok sabha seats on may 10.