It was back, with Sehwag's form, as Dravid, Dhoni and Yuvraj sparkled and then Pakistan was P-squared by Pathan and Powar, finishing off the lone-challenge from Inzy to give India an emphatic series-equalling win. 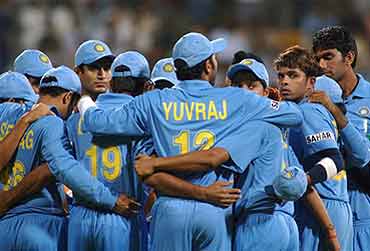 It was a remarkable turnaround by the Indians after their 6-wicket defeat in the first match yesterday and their efforts ensured they returned home with honours even.

After scoring a competitive 269 for 5, India bowled out Pakistan for 218 in 45.2 overs to register their 18th win in last 24 matches. It was also India's 25th win at a neutral venue against Pakistan who have played each other 64 times. Pakistan have won 37 while there have been two no results.

The Indian victory was set up by the batsmen and especially the 138-run partnership between Sehwag and Rahul Dravid who once again led by example with a fine 92.

Mahendra Singh Dhoni also joined the party with a 59 while Yuvraj Singh provided the late thrust with a cameo 10-ball 24.

The total was never going to be easy to chase on a tricky Zayed Stadium track and other than Inzamam-ul Haq (79) and Shoaib Malik (45), none of the Pakistani batsmen could stand up to the challenge.

Irfan Pathan and Ramesh Powar starred for the hosts with the ball, claiming three wickets each to take the wind out of Pakistan's sails.

Pakistan's chase began on a shaky note as they lost opener Imran Farhat to Irfan Pathan for 8, the leg before dismissal giving Pathan his 100th wicket in one-dayers.

The Baroda paceman struck again in his very next over, this time getting rid of the destructive Shahid Afridi (0) who was promoted up the order for some pinch hitting. The dashing batsman failed to read the good length delivery pitched on the middle and off stump line and tried to drive it away from body, only to see the ball uproot the middle stump in a spectacular fashion.

With Pakistan being reduced to 31-2, Younis Khan walked in to a huge uproar from the crowd but the vice-captain failed to weave his magic this time, being caught by a diving Dhoni off Ajit Agarkar for 5.

The onus fell on skipper Inzamam-ul Haq, who was extremely lucky to survive two very close leg before appeals, to resurrect the innings.

He did steady the innings somewhat in company of Shoaib Malik with a 46-run stand for the fourth wicket before the opener was sent back by a brilliant diving catch by Yuvraj Singh at square leg. Malik made 46 off 70 balls with five fours.

Pakistan would have been in deeper trouble when Inzamam holed out in the deep off Ramesh Powar but Harbhajan Singh failed to judge the catch.

However, Powar was rewarded for his efforts in the same over when he had an out of sorts Mohammad Yousuf caught by Suresh Raina for 5.

Unperturbed by the regular fall of wickets, Inzamam completed his 50 with a four off the first ball by Harabhajan but saw Kamran Akmal being dismissed four deliveries later, the scoreboard reading 147-6.

Pakistan lost another wicket for the addition of just one run when Abdul Razzaq holed out to substitute Mohammad Kaif to gift Powar his third wicket. And when Inzamam was run out for 79 (91 balls, 5x4, 1x6) in the 43rd over, the doors were effectively shut for Pakistan.

Earlier, it was a complete reversal of the script from yesterday's match as the very Indian batsmen who looked pedestrian, turned it around to put in a performance worthy of their staggering reputations.

While Dravid led from the front with his 116-ball knock, Dhoni chipped in with 59.

Yuvraj Singh provided the late flourish with a cameo 24 off 10 balls that included a hattrick of boundaries and a six off one over by Mohammad Asif.

However, the most heartening performance for the Indians was the show up the order by Sehwag who slammed 10 fours and a six in his 83-ball knock and raised 138 runs with his opening partner Dravid to lay the foundation for a big Indian total.

The Pakistani bowlers, sent on a leather chase for most part of the innings, staged a late comeback to claim the wickets of Dravid, Dhoni and Yuvraj to put the brakes on Indian scoring.

India were off to a subdued start after Dravid won the toss and elected to bat again, conceding three maidens on the trot against the new ball duo of Asif and Rana Naved-ul Hasan (2/45).

It was Dravid who scored the first four, a wristy shot off Rana Naved-ul HAsan that raced down the gap between mid on and mid wicket, to break the shackles and Sehwag followed suit, hitting Asif for two fours in an over. Sehwag, coming into the match after being dropped for two games, hit the same bowler for another couple of fours to regale the Indian supporters in the stands.

With the opening duo dealing in mainly fours, the run rate shot up as India raced to 69 for no loss in 15 overs.

The Delhi batsman completed his 21st ODI 50 and 5th against Pakistan with a single and raised his bat skywards to celebrate his return to form.

After taking India to 100 in 20 overs, the duo opened up further, rendering all the bowlers ineffective in the process.

Dravid also completed his 50, 71st in ODIs and 13th against the archrivals, off 60 balls with the help of 8 fours.

Sehwag continued to provide ample entertainment, despatching an Abdul Razzaq delivery over the long-off fence for a huge six but just when he looked all set for the three figure score, he was ensnared by part time spinner Shahid Afridi, the ball crashing on to the stumps after beating the batsman comprehensively.

Mahendra Singh Dhoni duly took the baton from Sehwag and kept the scoreboard ticking by his improvised shotmaking.

The Jharkhand batsman quickly reached his 50 off just 55 balls and his 90-run partnership with Dravid came to an end when the Indian skipper inside edged an Asif delivery on to his stumps.