Assisted by a track with a lot of carry and bounce, Makhaya Ntini (5-21) flattened Pakistan for 89 to author South Africa's 124-run victory and their march into the semi-finals. 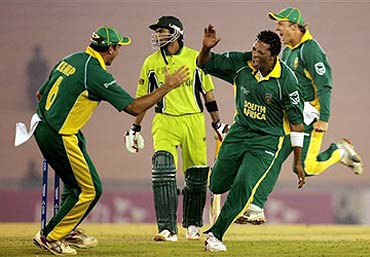 Maverick fast bowler Makhaya Ntini claimed 5 for 21 in a devastating display of seam bowling as South Africa steamrolled Pakistan by 124 runs to move to the semi-finals of the Champions Trophy today.

The 29-year-old speed gun whipped the cream off the Pakistani top order before Charl Langeveldt (3 for 20) and veteran Shaun Pollock (2 for 20) joined in the party to restrict Pakistan to a lowly 89 in 25 overs in what turned out to be a one-sided clash at the PCA Stadium.

Credit for the comprehensive South African victory should also go to Mark Boucher (69) and Justine Kemp (64) who put on 131 runs off 187 balls for the sixth wicket to lift their team from a precarious 42-5 and post a competitive 213 for 8 on a track which had a lot of carry and bounce.

The win helped South Africa finish on four points from their three games and become the second team from Group B after New Zealand to make it to the last four of the elite tournament.

South Africa, in fact, topped the group on net run rate and would now play the second semi-final at Jaipur on Nov 2 while New Zealand will play the first semi-final here a day before.

Their opponents would be decided after the last Group A league match between India and Australia here on Sunday, with West Indies having confirmed their berth from that group.

Pakistan, who were skittled out for their lowest total against the Proteas, were chucked out of the championship afer finishing wih two defeats from three matches.

Pakistani batsmen showed neither the application nor the desire to resurrect their innings as eight of them were dismissed on single digit scores. Ironically, tailender Yasir Arafat was their top scorer with 27 and extras were the second highest contributor to the total at 16.

Pakistan were off to a nightmarish start, losing opener Mohammad Hafeez to the second ball of the first over by Ntini who also got rid of a struggling Imran Farhat (4) in his very next over to give South Africa important breakthroughs.

Farhat was caught by Shaun Pollock, the all-rounder taking the 100th catch of his career. He also became only the sixth player in ODIs to complete the unique record of scoring 1000 runs while taking 100 wickets and 100 catches.

Reduced to 2 for 9, Pakistan found themselves on the same boat as South Africans and in fact in a worse scenario when they lost three more wickets in the space of 13 runs.

Pollock sent back Mohammad Yousuf (5) with a peach of a ball that swung in sharply after hitting the deck hard to uproot the batsman's off stump in spectacular fashion.

Then Ntini, breathing fire on a lively track, removed skipper Younis Khan, who failed in his third match on the trot, and the in-form Shoaib Malik off the second and fourth balls of the 8th over to have Pakistan in a real spot of bother at 21 for 5.

Younis (7) tried to play an ambitious pull shot but was caught by Langveldt at mid on while Malik (0) poked at a ball going down the leg side which was caught by Boucher who dived to his left to take the blinder.

The ordeal was not yet over for Pakistan as they lost wicketkeeper batsman Kamran Akmal, also to Ntini, when he was trapped leg before, the scoreboard reading a sorry 27 for 6 in the 10th over.

It was left to flamboyant Shahid Afridi to repair the damage and the all-rounder did try to break the shackles by hitting a six and a four off Ntini to relieve some of the mounting pressure.

However, Afridi (14 off 8 balls) was a trifle unlucky to be adjudged leg before off Pollock by umpire Mark Benson as replays suggested that the ball might have missed leg stump.

Abdul Razzaq also failed to conjure any magic, being clean bowled by a sharply seaming delivery by Langveldt in his very first over for 5.

Earlier, Pakistan's speedsters did a commendable job in giving their team early breakthroughs on a helpful track although they did lose the plot a bit in the middle overs to allow the South Africans to score a fighting total in the end.

South Africa's decision to bat first on the lively track appeared to backfire badly when they lost two wickets in two balls right in the very first over.

It was a fiery spell from speedster Umar Gul (3-36) which saw captain Graeme Smith and Herschelle Gibbs return to the pavilion without making a run.

Smith tried to play a defensive shot on the back foot but only ended up being trapped plumb in front while the off-colour Gibbs poked at an away going delivery to give Shoaib a catch in the slips.

Boeta Dippenaar and Jacques Kallis were both guilty of attempting to play the ball away from the off stump off Rao Iftikhar Anjum (2-26) and handing the catch to Akmal, the wicketkeeper having a busy day at office.

South Africa lost another wicket, that of AB de Villiers, to be reduced to 42 for 5 in the 13th over.

With the fast bowlers getting lot of help from the wicket early on, the batsmen needed to see through the initial overs as the pitch eased down as the game progressed.

This was evident in the way Boucher and Justine Kemp negotiated the bowlers in the middle overs and Younis Khan let Anjum complete his quota of 10 overs by the 35th over.

Boucher was the more enterprising of the two, the veteran wicketkeeper-batsman reaching his 20th ODI 50 off 73 balls and with the help of six fours.

Kemp also did an admirable job of mending the tattered innings and in the process reached his 50 off 94 balls with the help of four fours and a six.

But just when things appeared to have come back on track, Razzaq tempted Boucher to go for a big one in the 44th over but the ball took the top edge of the bat and ballooned to point fielder Hafeez who also succeeded in sending back Pollock cheaply for two just two overs later.

Kemp, who faced 110 balls and hit four fours and two sixes, was dismissed by Gul in the final over while trying to go for a big one.