A cause of concern around the globe, here's what is known of the virus and how to prevent it from affecting the respiratory tract 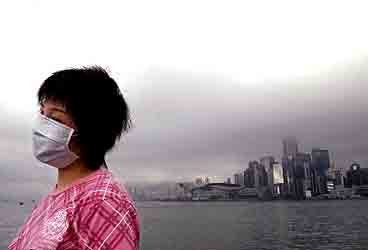 What you should know about SARS

With more than 2,200 infected and 78 dead till date, SARS (or Severe Acute Respiratory Syndrome) has become a cause of concern around the globe. Here’s what is known of the mystery disease and how to prevent it:

According to the World Health Organisation, SARS is a virus that affects the respiratory tract (lungs). The main symptoms of SARS are high fever (> 38° Celsius), dry cough, shortness of breath or breathing difficulties. Changes in chest X-rays indicative of pneumonia also occur. SARS may be associated with other symptoms, including headache, muscular stiffness, loss of appetite, malaise, confusion, rash and diarrhoea. Its incubation period is short, estimated to range from 2-7 days, with 3-5 days being more common.

Where does it come from and how far has it spread?

Geographically, the outbreak seems to centre around China's Guangdong province, near Hong Kong. From an epidemiological standpoint, no one knows where SARS comes from, where it began, or how it infected its first victim. As of 24 March, cases had been reported from thirteen countries. Of these, four countries have only imported cases with no documented local transmission, indicating that the disease is not spreading in these countries and residents are not at risk.

Who is at risk?

Theoretically, anyone who is within coughing or sneezing distance of someone infected with SARS can come down with the virus. Those who live or work in close quarters like housing projects or hospitals appear to be most at risk. People diagnosed with SARS are generally isolated from the general public, and health care workers who treat these patients are at significant risk for the disease, and should wear filter masks, goggles, aprons, head covers, and gloves when in contact with SARS patients.

How can I protect myself from SARS?

In countries (like India) where no case has yet been reported there is no immediate cause of alarm. But, this illness can be severe and, due to global travel, has spread to several countries in a relatively short period of time. However, SARS is not highly contagious when protective measures are used, and the percentage of cases that have been fatal is low.

People who live in hard-hit areas like Hong Kong, which is adjacent to Guangdong, should follow local health officials' instructions and keep their distance from people known to be infected. Travellers should note that WHO now recommends that visits to Hong Kong or the Guangdong Province be postponed, unless the travel is "essential."

Is SARS an agent of bio-terror?

WHO says there is no reason to believe the outbreak of SARS is the result of bio-terrorism.

What is the treatment for SARS ?

While some hospitals have administered antibiotics to affected patients, the drugs do not appear to help.At the moment, the only treatment is isolation, observation and "supportive care," or rest and liquids. A significant number of patients in Vietnam have improved as a result of good supportive care.