'Sermons For The Poor'

'I do not see any hope for countries like India at the Montreal conference ... I apprehend that both the US and the EU would put pressure on China and India that they must think about the world...' 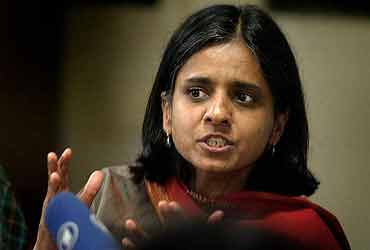 Nagendar Sharma: Would you say that the climate change due to rising pollution levels throughout the world is a greater threat to human and plant life than even terrorism?

Sunita Narain: I think it is. The disastrous effects of climate change are visible and are in fact growing. Hurricanes, cyclones, used to be a milder form, but today they have taken the shape of a Tsunami and a Katrina. I am not saying that the sole reason is climate change, but that we are playing havoc with environment. Scientific research shows that unless we start respecting environmental concerns - and soon - it may be too late for future generations

Listener from Shillong: The rich and powerful countries are mainly responsible for pollution by means of poisonous emissions, whether we look at Chernobyl, or the recent blast in a petrochemical plant in China. Americaâ€™s refusal to accept the Kyoto protocol is a major example. Canâ€™t the environmentalists the world over do anything to prevent the powerful from destroying the ecological balance?

Sunita Narain: You have raised a very valid query, and I would like to say that the challenge facing us is even greater what you have mentioned. Environment is directly linked to our model of development. Let us first look at ourselves without talking big: What are we doing ourselves? Burning fuel to pollute the environment. What does this pollution do? It increases the temperature. If locally we could, at our individual levels, ensure that we do not pollute, we would be playing a role at the macro level to minimise the global warming throughout the world.

What has happened during the past century or so is that the developed countries of today have held the world to ransom by their developmental policies. These nations did not bother at all about environment, did not think about the pollution and emissions with the result that today the world is faced with the grave danger of rise in temperature, and global warming. Now if the developing countries also want to follow the same policies, then it would not take much to know where the world is heading.

Nagendar Sharma: In such circumstances, what realistic hopes are there from the UN conference on climate change beginning in Montreal from Monday (28th Nov), as it is being seen as 'make or break' for the Kyoto agreement ?

Sunita Narain : During the past decade, we have seen hectic consultations at the international level to reduce gas emissions. EU countries, especially Britain, had set ambitious targets for themselves, but could not achieve them. The major reason is because they were not able to change their developmental policies. However, these are countries which were at least paying lip-service. On the other hand, we had countries like America and Australia which are unrepentant for their negative roles in green house gas emissions. These countries have gone to the extent of saying that they would not take any steps for rectification.

Now coming to Montreal, I apprehend that both the US and the EU would put pressure on China and India that they must think about the world: Since we could not cut emissions, you must do so since you are densely populated!

Nagendar Sharma: But why have countries of the world failed in their repeated efforts to convince or pressure America to accept the Kyoto agreement?

Sunita Narain: We must be very clear that this issue is not merely confined to environment. When you talk of Kyoto it is directly linked with development. Now before talking about America, let us look at our own country, and that would answer your question as to why the countries have failed in convincing America.

We must first of all admit that India has so far not been serious in meeting the challenge of climate change. Look at the effort we are making for putting our point across at the WTO, commerce minister Kamal Nath is touring country after country to garner support for our stand. Unfortunately on the crucial issue of climate change, which can ruin us completely -- first naturally with the rise in temperature, and secondly, internationally we may be forced to slow down developmental works in the country -- neither the Prime Minister nor any of his ministers have taken Montreal seriously. It is unfortunate that no top level preparation has been done for such an important event. Depending on an officer or two would not help the country's cause. This is happening because we in India think environment is somebody elseâ€™s concern. If you are yourself serious then only can you talk of others.

Nagendar Sharma: But with whatever preparation India has done so far, in your view, what strategy should India adopt along with other developing nations at Montreal?

Listener from Bangalore: Environmentalists talk a lot about ecological balance, but is it possible for any country to abandon development for environment or do you think a balance could be struck between development and environment?

Sunita Narain: I would like to answer your question with the example of your city itself. Today 300-400 hundred cars are being added to Bangalore everyday, with the result of congestion on roads and unending addition in pollution. Next would be more flyovers and widening of roads to accommodate the road rush, perhaps something like Delhi. However no amount of flyovers or roads would be sufficient to cope with such a vehicular increase on the roads.

What is required is strengthening of the public transport in the form of buses and trains. If somehow the elite could be convinced that their prestige would not be lowered by travelling in public transport, we would be able to bring down pollution levels considerably. Now coming to the balance between development and environment, I think Montreal provides us with another opportunity to put our view strongly that we do not want development at the cost of environment, and the example of Bangalore shows that if we want to cut pollution levels, then for strengthening public transport, we need financial support from the developed world and not just sermons.

Listener from Haryana: Given the vulnerability of developing world and the arrogance of developed world, would Montreal conference be only for the records or do you see any concrete progress ï'½" a ray of hope?

Sunita Narain: I do not see any hope for countries like India at the Montreal conference. On the contrary, I fear the developmental model of developing nations would be severely criticised. I think developing nations should try and project a united front. The developing world should convince the powerful nations that climate change is a threat for developing and developed world alike and collective efforts are required, otherwise this conference would also end up as a sermon for the poor countries.

Nagendar Sharma: Why has Britain done a complete turnaround on Kyoto, from its earlier stand of persuading America Tony Blair now says the world must understand the American viewpoint?

Sunita Narain: There has been a turnaround in British stand on its own emission cut promises as well. It took an ambitious target, and has failed in completing it. Britain had also said earlier that it would rectify its developmental policies to adopt an environmental friendly atmosphere, but miserably failed in doing so. Since the beginning of this year Blair began saying America is not wrong in having ignored the Kyoto Protocol and countries round the world should understand its viewpoint. Again this is guided by other considerations, and environment has taken a backseat.

Listener from Delhi: Why should developing countries face the consequences for the environmental wrongdoings of developed countries?

Sunita Narain: They should not, ideally, but then the focus and united efforts of developing countries should be in this direction, which I find lacking at the moment. There is no doubt that developed countries adopted wrong models for their respective developments, and are mainly responsible for ecological disturbances across the world. They are now asking countries like India and China to take the lead in rectifying their mistakes.

These powerful nations first spread pollution and when the mess is complete, they do not even take responsibility. The blunders which we are making today in playing havoc with environment is already showing its effects as reflected by terrible Tsunamis and Katrinas. If all of us do not mend our ways, further disasters await us. The whole world would have to stand up in defending environment, otherwise soon we may not have answers for this.

Muslims Must Say No To AMU Reservations