The attack on the airport in Karachi is just another in a long chain of devastating terrorist strikes against Pakistan's critical infrastructure and security establishments. 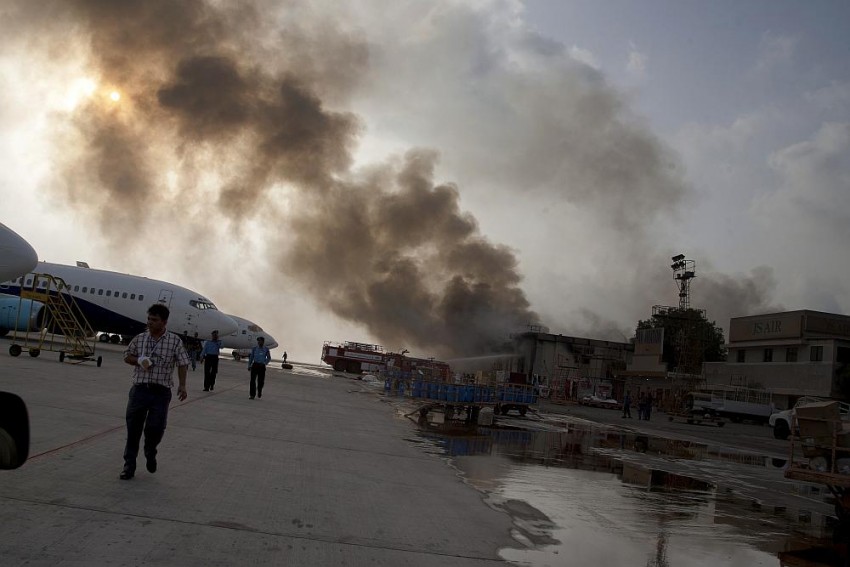 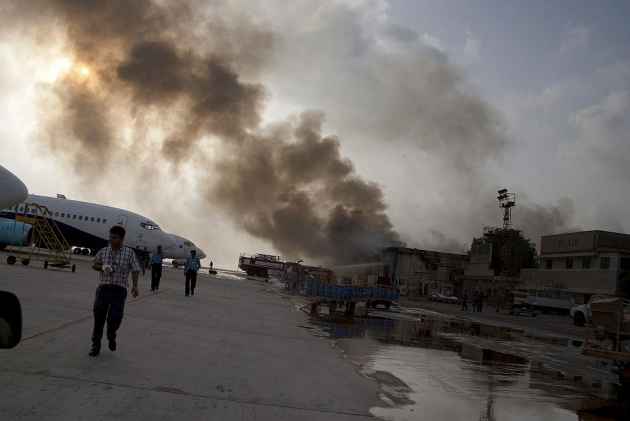 In an attack symbolic of the deteriorating security environment across Pakistan, more than 10 terrorists, equipped with suicide vests, grenades and rocket launchers, infiltrated the Jinnah International Airport in Karachi, the provincial capital of Sindh, at mid-night on June 8-9, 2014, engaging in an extended firefight against security forces (SFs), that had resulted in 28 deaths till the time of writing. The dead included the 10 attackers, and at least another 18 people, including eight members of the Airport Security Forces (ASFs) two Rangers officials, one police officer and three Pakistan International Airlines (PIA) officials are among the dead.. Explosions and gunfire that rang out across the airport through the night, ended just before 5am [PST] on June 9, after a five hour siege, when the last of the 10 attackers was killed. However, the military later stated that the operation had been re-launched, as gunfire had resumed. The operation continues at the time of writing. [See updates here]

The Chief Minister of Sindh Province, Syed Qaim Ali Shah, admitted, "They were well trained. Their plan was very well thought out." Indeed, one senior Pakistani intelligence official, who spoke on condition of anonymity, claimed that some of the terrorists tried to hijack a plane, but were unsuccessful.

Meanwhile, claiming responsibility for the attack, Tehreek-i-Taliban Pakistan (TTP) 'spokesperson' Shahidullah Shahid declared that the attack had been planned much earlier, but had been 'postponed' due to the peace talks.

Karachi, the port city which has been on the boil since long, had been on tenterhooks for last three days after the British police arrested Altaf Hussain, the leader of the Muhajir Quami Movement (MQM), the city's biggest political party, who lives in London, on suspicion of money laundering on June 3, 2014. Hussain was, however, released on June 6, but remains under investigation.

Pakistan's fragile security environment was equally evident in another attack on June 8, 2014, which occurred in the neighboring province of Balochistan, in which at least 23 Shia pilgrims returning from Iran were killed in a terrorist assault on two hotels - Al-Murtaza hotel and Hashmi hotel - located in Taftan tehsil (revenue unit) of Chaghai District, near the Iranian border. The terrorists attacked the pilgrims when their convoy of 10 buses stopped at the two hotels. Four of the attackers were later killed by the Levies Forces, after a heavy exchange of fire. A banned outfit, Jaish-ul-Islam, claimed responsibility for the attack.

According to partial data compiled by the South Asia Terrorism Portal (SATP), at least 1,895 people, including 859 civilians, 759 terrorists and 277 SFs have been killed in 593 incidents of killing in the first five months and eight days of the current year. Of these, 593 incidents of killing, 152 were major incidents (each involving three or more fatalities), resulting in 1312 deaths. The number of suicide attacks and resultant fatality during this period stands at 18 and 12, respectively. These fatalities occurred in incidents of explosion, sectarian attacks and other terrorist violence, across Pakistan.

Despite this unabated terror within Pakistan, there is an ongoing attempt at the highest echelons of power in the country, both in the military and the civilian establishment, to appease the 'good terrorists'. A series of talks have been held between a faction of the TTP and the civilian Government in the recent past, even as terrorist violence has persisted. The talks have now been suspended, but a claim made by a former Chief of Army Staff, Gen (Retd.) Mirza Aslam Beg, once again confirms that the military-mullah combine remains at the core of terror in Pakistan, and any respite from this menace can only be achieved, if ever, by rupturing this bond. In a media interview, Beg stated,

It [the talks] were troubled as irrelevant people were holding talks. It will bear positive results when the army and the Taliban, who are the actual parties to the conflict, will meet to resolve their issues. There was no justification for talks between the Government and TTP as it was bound to yield no results.

More interestingly, referring to a suicide attack targeting the SFs in which two senior Army officers were killed on June 4, 2014, Beg claimed this was a retaliatory assault by the TTP, adding, "That is not the first time the Tehreek-e-Taliban Pakistan have killed Army officers to avenge the military's strikes. Both the Army and the Taliban have been killing each other during the last 10 years in retaliation. Such acts by TTP will not hinder the peace talks."

Astonishingly, for a military establishment that displays such a wide tolerance for acts of murder by the TTP, the spectrum of tolerance for dissent and criticism from the media has been starkly narrow. There have been relentless attempts to silence the media, with the civilian Government expectedly toeing the Army's line.

Significantly, top Pakistani journalist Hamid Mir (47) was seriously wounded in a targeted shooting in Karachi on April 19, 2014. Mir's car was ambushed as soon as it left Karachi's Jinnah International Airport and was on the way to his Jang group-owned Geo TV's office. Mir had earlier told his family, friends, colleagues, army and government officials in writing that he would hold Inter-Services Intelligence (ISI) chief Lt. General Zaheerul Islam responsible if he was attacked. Indeed, Mir's younger brother and journalist, Amir Mir, claimed, "Hamid Mir was on ISI's hit list since Ahmed Shuja Pasha was its chief. Zaheer-ul-Islam continued the policy of his predecessor. The ISI personnel are always present at airports. They knew his movement from Islamabad to Karachi and blaming terrorists for this act is just nonsense." ISI and the military establishment, said to have been unhappy with Hamid Mir's talk shows on Balochistan's insurgency, ex-president General (Retd.) Pervez Musharraf's treason trial and the military's interference in politics, were infuriated by these public denunciations.

Soon after the attack on Hamid Mir, and Amir Mir's accusations, the defence ministry demanded that Geo TV's broadcast license be suspended. Despite Geo TV's public apology on May 26, 2014, that "we have concluded that our coverage immediately after the tragic and unnerving attack on Hamid Mir on April 19 was excessive, distressful and emotional", the Pakistan Electronic Media Regulatory Authority (PEMRA), on June 6, 2014, declared that it had formally shut down Geo TV for 15 days and imposed a $101,500 fine. On the same day, Geo TV issued a statement observing, "Geo and Jang Group (have) served legal notice on the ministry of defence, Inter-Services Intelligence (ISI) and Pakistan Electronic Media Regulatory Authority (PEMRA) for defaming and maligning the group."

Given the might of the military, in a country where journalists are under constant threat, the outcome of this confrontation is not difficult to predict. It is useful to recall that, according to a recent report by Amnesty International titled "A Bullet Has Been Chosen for You", at least 34 Pakistani journalists have been killed as a direct result of their work, just since 2008.

Despite the sheer quantum of bloodshed in terrorist depredations within Pakistan, the state continues with its patronage to the entrenched terror industry, and to the strategic export of terrorism from Pakistani soil. Pakistan's support to various Taliban factions operating in Afghanistan, and a range of terrorist groups acting in India, has been repeatedly documented. Most recently, on May 23, 2014, gunmen armed with machine guns and RPGs attacked the Indian Consulate in Herat Province in Afghanistan. Personnel of the Indo-Tibetan Border Police and Afghan SFs killed all four attackers in an encounter that lasted 10 hours. Afghanistan President Hamid Karzai later confirmed, "According to information given to us by a Western intelligence agency, the perpetrators of the Herat attack belonged to the LeT [Lashkar-e-Taiba]. This was mentioned in writing in the report shared with us".

It has long been an open secret that LeT is the ISI's 'most trusted' ally in its terrorist enterprises. Waziristan, the lawless tribal region of Pakistan, has for long served as a safe haven for terrorist groups operating in India and Afghanistan, among other countries. A number of Central Asian terrorist groupings, including the Islamic Movement of Uzbekistan (IMU), Islamic Jihad Union (IJU) of Kazakhstan, the East Turkistan Islamic Movement (ETIM) and Jama'at Ansarullah (Society of Allah's Soldiers) of Tajikistan, and Al Islambouli Brigades of al Qaeda, continue to receive protection on Pakistani soil. Recent reports indicate that a new terrorist formation, Ansar Al-Tawheed fi Bilad Al-Hind (The Supporters of Monotheism in the Land of India), has been established in this region.

While the Army remains reluctant to sustain operations in terror infested FATA and Khyber Pakhtunkhwa, the enthusiasm for operations, including 'kill and dump' actions against activists and their families, in Balochistan, continues to increase. On June 5, SFs in the province launched another operation, killing at least 30 Baloch rebels in the Dera Bugti District of Balochistan. Balochistan home minister Sarfraz Bugti said the militants were members of the Baloch Republican Army (BRA). One SF trooper was also killed and another eight were injured during the exchange of fire. Again on June 8, 10 Balochistan Liberation Army (BLA) militants were killed in the operation. Conspicuously, SATP shows that Balochistan has recorded at least 3,176 civilian fatalities since 2004. 294 civilian killings (192 in the South and 102 in the North) have been claimed by Baloch separatist formations such as the United Baloch Army (UBA), BRA, BLA and Balochistan Liberation Tigers (BLT). The Islamist and sectarian extremist formations, primarily Lashkar-e-Jhangvi (LeJ), TTP and Ahrar-ul-Hind (Liberators of India) claimed responsibility for the killing of another 502 civilians, all in North, mostly in and around Quetta. The remaining 2,380 civilian fatalities - 1,457 in the South and 923 in the North - remain 'unattributed'. A large proportion of the 'unattributed' fatalities, particularly in the Southern region, are believed to be the result of enforced disappearances carried out by state agencies, or by their proxies, prominently including the Tehreek-e-Nafaz-e-Aman Balochistan (TNAB, Movement for the Restoration of Peace, Balochistan).

Pakistan persists in its perverse policy of cultivating its 'loyal' terrorist formations, which are used both for external strategic extension and domestic political management, even as it seeks to suppress groups that have turned renegade, or that have raised the banner of revolt against Islamabad. It is, however, the spaces created for 'friendly terrorists' that are being progressively occupied by groups inimical to the state, in a blowback that threatens to snowball beyond the state's capacities of 'management'. The attack on the airport in Karachi is just another in a long chain of devastating terrorist strikes against Pakistan's critical infrastructure and security establishments. With a military and political establishment that refuses to relinquish the instrumentalities of terrorism as instruments of state policy, Pakistan can only continue its accelerating hurtle into chaos.

'Putting The Indian Economy Back On Track Is Paramount'