The result now a foregone conclusion, Sehwag's (164) ruthless exhibition of stroke play enlivens proceedings on yet another fog-hit day and provides the ideal platform for the top order to come good after a prolonged lean run. 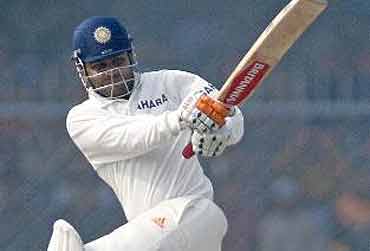 Virender Sehwag gave a ruthless display of his stroke-making abilities as India's top-order batsmen today hit form after a prolonged lean trot in the first Test against South Africa which was headed for a tame draw.

The hard-hitting Sehwag (164) not only notched up his eighth Test century but also achieved a number of individual milestones to steer India to a formidable 401 for four in their first innings at close on a fog-hit penultimate day.

The home team's middle order batsmen, most of whom have been woefully short of runs before the current series got underway, took the opportunity to regain their touch on a lifeless track at the Green Park.

Vice-captain Rahul Dravid was batting on 52 and V.V.S. Laxman was giving him company on four at stumps with India trailing by 109 runs.

Newcomer Gautam Gambhir (96), Dravid and skipper Saurav Ganguly (57) got into the run-scoring groove on a day which saw just four wickets fall. Only 13 wickets have fallen in four days of play reflecting the placid nature of the track.

With the possibility of fog delaying the start of the last day's play tomorrow, the match is heading towards a tame draw with the only point of interest being whether the home team can gain the first innings lead.

Play began one hour late from the scheduled start at 9 am today because of fog but despite the heavy conditions, the South African pace bowlers could obtain no movement from the pitch which showed no signs of wearing down.

Resuming at the overnight score of 185 for no loss in reply to 510 for nine declared, the day clearly belonged to Sehwag who was first involved in a record 218-run opening partnership with Gambhir and then emerged as the highest individual scorer against South Africa at home. The dashing Sehwag turned on the heat from the very second over producing a pleasing cover drive to the fence off Makhaya Ntini and then spanking Shaun Pollock to the boundary.

But he was at his belligerent best in the post-lunch session clobbering 54 runs off just 35 balls.

The two Delhi batsmen recorded the second highest opening partnership in Indian Test history when they crossed 213, the previous record by Sunil Gavaskar and Chetan Chauhan against England at the Oval in 1979. It was the sixth 200 plus partnership by an Indian opening pair so far.

But Gambhir fell just four runs short of what could have been his maiden Test century.

The left hander, playing in his second Test since making his debut against Australia in Mumbai earlier this month, edged an away going delivery off Pollock to wicketkeeper Thami Tsolekile. He occupied the crease for 246 minutes and faced 151 balls during his knock of 96 which included 11 boundaries and a six.

Sehwag launched a blistering assault on a clueless bowling attack which also helped him complete 1000 runs in a calendar year. He has hit three centuries in nine Tests played so far this year.

Sehwag broke loose immediately after the lunch break spanking the first ball by Andrew Hall to the boundary and and kept up the tempo with a flurry of strokes in the extended post-lunch session much to the delight of the vociferous home crowd. He rattled up 54 runs in just 35 balls after the lunch interval before falling leg before to Hall who also scalped the prized wicket of Sachin Tendulkar (3) in the span of four overs.

The Delhi opener was particularly severe on Hall smashing him for 18 runs in an over and then hammered medium pacer Zander de Bruyn and spinner Robin Peterson for 14 runs each in an over to dramatically accelerate the pace of scoring.

Sehwag occupied the crease for 326 minutes and faced 228 balls during his rollicking knock of 164 which contained 20 boundaries and two sixes.

His magnificent effort eclipsed Mohammad Azharuddin's record individual score of 163 not out at this venue in 1996-97. Tendulkar holds the record of the highest score by an Indian against South Africa with 169 in the Johannesburg Test in 1996-97.

Tendulkar never really looked comfortable during his 21-minute stay at the crease and returned to the pavilion when Hall knocked off his middle stump with a superb in-swinger. The pace of scoring dropped considerably after Sehwag's dismissal with Dravid and Ganguly playing cautiously.

Ganguly got a reprieve when on 12 with Martin Van Jaarsveld dropping a difficult chance in the mid-off region, Peterson being the unlucky bowler.

The Indian captain was in a more attacking mood after the tea break unleashing some glorious shots on both sides of the wicket, picking up Ntini for special treatment by hammering him for two boundaries in the same over.

South African captain Graeme Smith claimed the second new ball after 96 overs but there were no immediate results as Ganguly and Dravid had got used to the slowness of the track by then.

Ganguly notched up his 23rd half century but perished soon after with his short-arm pull landing straight into the hands of Peterson at fine leg, part-timer De Bruyn providing the breakthrough.