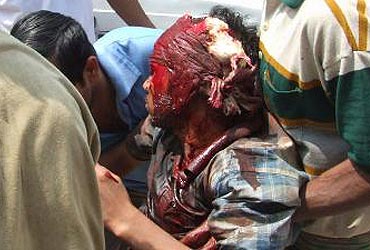 A situation of terror has been created by the ruling CPI (M) government and party in Nandigram over the past few days. The matter reached a head as a huge contingent of 4000-5000 comprising the Police Force along with Para-Military, Rapid Action Force and Combat Commando Force attacked Nandigram in the name of "Operation Nandigram". This has come as a repressive measure in the face of protest and local movement (Bhumi Ucched Pratirodh Committee — Committee to Prevent Farmland Eviction) by the people of Nandigram against the forceful land acquisition for proposed SEZs (Salim Group, Indonesia) in the area.

This is the second instance of violence in the area, the first being in early January when 6 people were killed. The last instance was provoked in the wake of the local administration serving notices for land acquisition. After country wide criticism and protests against the state government, the Chief Minister had issued a statement that no land would be acquired in Nandigram if the people are not willing. Despite this statement government has continued to maintain pressure in the area through deployment of armed forces. This clearly shows on whose side the Fascist West Bengal government is.

Today, on Wednesday morning the armed forces broke fire on the people as a result of which 20 people have been killed and over 200 injured. The state government and West Bengal police are still not declaring the numbers dead and injured. A huge protest movement has spread across West Bengal. In every district, rallies, demonstrations, road-blockages are being organised. National Hawker Federation and Hawker Sangram Committee is also strongly condemning this barbaric fascist action of West Bengal government and organizing rallies all over Kolkata. Reporters from all the major media institutions are also being forcefully stopped from covering and reporting the reality. Two reporters of Tara Bangla News were threatened by CPM party cadres and are now missing.

We appeal to all those who believe in democracy to condemn this fascist move by the government to pressure local communities to give up their only sources of livelihoods. We see this Nandigram police firing as a mass killing led by the government who stands only in support of capitalists and its own selfish interests.