Sanctified Vandalism As A Political Tool

We have been fed with constant propaganda that the destruction and desecration of places of worship is a fine art mastered by the Muslims -- but, what about the Hindus and others? 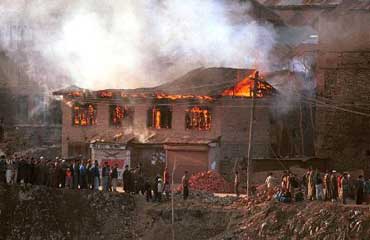 The recent destruction of a centuries-old mosque in a small town in Rajasthan and the construction of a temple in its place points to a recurring theme in India’s history--the use of sanctified vandalism as a political tool.

In recent years, ever since the campaign to destroy the Babri Masjid was launched, we have been fed with constant propaganda that the destruction of places of worship was a fine art that Muslims, fired with an irrepressible iconoclastic zeal, had mastered. Yet, as the recent Rajasthani case so clearly suggests, others have been, and continue to be, guilty of the sin as well.

It is true, as the historical records show, that some Muslim kings did indeed destroy Hindu temples. This even Muslims themselves would hardly dispute. In assessing the historical record, however, certain precautions are necessary. Most importantly, a distinction must be made between Islamic commandments, on the one hand, and the acts of individual Muslims on the other.

The Qur'an in no way sanctions the destruction of the places of worship of people of other faiths. For the most part, Muslims have abided by the Qur'anic injunction that ‘there is no compulsion in religion’. Thus, for instance, after Muhammad bin Qasim, leading the first Muslim army to India, had subdued Sind, he granted the local Hindus and Buddhists full religious freedom and guaranteed the protection of their shrines.

Or, for that matter, when Sultan Sikander of Kashmir, egged on by his Brahmin Prime Minister, Suha Bhat, set about pulling down temples on a large scale, the leading Kashmiri Muslim Sufi , Hazrat Nuruddin Nurani, bitterly protested, arguing that Islam did not sanction this. This opinion was shared by several other Muslim ‘ulama and Sufis as well. Thus, the Tabaqat-e-Akbari tells us that when they heard that Sultan Sikander Lodi (r. 1489-1517) was planning to destroy some temples, a group of high-ranking ‘ulama protested, saying, ‘It is not lawful to lay waste ancient idol temples’.

Caution must be exercised in accepting the narratives provided by medieval writers about the exploits of kings, including their ‘feats’ of temple destruction. Most historians were employees of the royal courts, and they tended to exaggerate the ‘exploits’ of the kings in order to present them as great champions of Islam, an image that hardly fits the facts that we know about them.

Thus, for instance, the author of the late eighteenth century ‘Riyad-ul Salatin’ claimed that Muhammad Bakhtiyar demolished several temples in Bengal when he captured the province in 1204, although there is no evidence to suggest that this had indeed been the case.

In his recent book, Essays on Islam and Indian History , the well-known historian Richard Eaton points out that of the sixty thousand-odd cases of temple destruction by Muslim rulers cited by contemporary Hindutva sources, one may identify only eighty instances ‘whose historicity appears to be reasonably certain’.

Eaton clearly shows that cases of destruction of places of worship were not restricted to Muslim rulers alone. He recounts numerous instances of Hindu kings having torn down Hindu temples, in addition to Jaina and Buddhist shrines. He says that these must be seen as, above all, powerful politically symbolic acts.

Typically, cases of shrine destruction are reported in the wake of the overthrow of a powerful enemy and the annexation of his territory. The royal temple of the enemy was often pulled down to symbolize the enemy’s defeat. Thus, for instance, the historical records speak of the seventh century Hindu Pallava king Narasimhavarman I, who looted an idol of Ganesha from the Chalukyan capital of Vatapi.

Fifty years later, the Hindu Chalukyan army brought back with them idols of Ganga and Jamuna, looted from temples of their fellow Hindu enemies to the north. In the eighth century, a Bengali Hindu army is said to have destroyed an idol of Vishnu belonging to their imperial foe, the Hindu king Lalitaditya of Kashmir. In the tenth century, the Hindu Pratihara king Herambapala defeated the Hindu Shahi king of Kangra and looted a solid gold idol of Vishnu from the Kangra royal temple.

In the eleventh century, the Chola ruler Rajendra I furnished his capital with idols of Hindu deities that he had captured from his enemies, the Chalukyas, the Palas and the Kalingas. The sixteenth century Vijaynagara ruler, Krishna Deva Raya, is reported to have looted an idol of Krishna from Udaygiri after inflicting on it a crushing defeat. He is also said to have looted a Vittala idol from the famous Pandharpur temple.

Besides looting idols from the temples of their fellow Hindu enemies, several Hindu kings are reported to have destroyed the royal temples of their vanquished foes to signal their victory. Thus, the tenth century Rashtrakuta king Indra III destroyed the temple of Kalapriya at Kalpa, after defeating his dreaded enemies, the Rashtrakutas. Likewise, Kapilendra, the founder of the Suryavanshi Gajapati dynasty in Orissa is said to have sacked several Hindu temples in the course of his military campaigns in the Tamil country. These are instances of Hindu kings looting Hindu idols and destroying Hindu temples for political purposes.

The number of Jaina and Buddhist shrines destroyed by Hindu kings must certainly be much greater. Because royal temples served as powerful political symbols and centres—where often kings were worshipped as forms of the deities—they seem to have been the particular object of attack by invaders, irrespective of religion. As Eaton remarks, ‘It is clear that temples had been the natural sites for the contestation of kingly authority well before the coming of Muslim Turks to India. Not surprisingly, Turkish invaders, when attempting to plant their own rule in early medieval India, followed and continued established patterns’. He further adds, ‘Whatever form they took, acts of temple desecration were never directed at the people, but at the enemy king and the image that incarnated and displayed his state-deity’.

As in the case of Hindu rulers’ attacks on temples, Eaton says that almost all instances of Muslim rulers destroying Hindu shrines were recorded in the wake of their capture of enemy territory. Once these territories were fully integrated into their dominions, few temples were targetted. This itself clearly shows that these acts were motivated, above all, by political concerns and not by a religious impulse to extirpate idolatry. The essentially political, as opposed to religious or communal, nature of these acts is clearly suggested in the details that the historical chronicles provide. Thus, for instance, we hear of the army of the Golconda Muslim Sultans, led by the Marathi Hindu Brahmin general, Murahari Rao, which conquered a large swathe of territory up to the Krishna river.

Rao is said to have sacked the famous Ahobilam temple, and looted its ruby-studded idol, which he presented to the Sultan as a war trophy. Likewise, we are told that Sultan Sulaiman Karrani of Bengal dispatched an army to Orissa against the Hindu Gajapati Raja to punish him for entering into a pact with the enemies of the Sultan, the Mughal Emperor Akbar and the Pathan Ibrahim Sur. The army, after defeating the Raja, then set about looting the Jagannath temple, the main royal shrine. As Eaton shows, it was usually the large royal temples that were targetted, for not only were they symbols of political power, but were also richly endowed with jewels, gold and other precious metals.

In the wake of these attacks on enemy power, ordinary people were rarely targetted. Thus, for instance, when a Mughal army attacked Kuch Bihar in northern Bengal and destroyed the idol of the state-deity of Raja Bhim Narayan, the chief Mughal qazi of Bengal, Sayyid Muhammad Sadiq, issued an order to the Mughal soldiers that, ‘nobody should touch the cash and property of the people’, laying down that those who infringed this order would have their hands, ears or noses lopped off.

If the destruction of temples were, above all, powerful political acts, so too were instances of patronage extended to temples by rulers. Thus, in addition to Hindu rulers, many Muslim kings endowed temples with large land grants. A fourteenth century Sanskrit inscription records that thirteen years after his annexation of the northern Deccan, Sultan Muhammad bin Tughlaq appointed a Muslim official to repair a Shiva temple at Kalyana.

The much-maligned Aurangzeb, who is said to have destroyed some Hindu temples, is also known to have made extensive grants to other Hindu shrines. Thus, in 1659 in a royal order issued to his officers in Benaras, he wrote: ‘In these days, information has reached our court that several people have, out of spite and rancour, harassed the Hindu residents of Benaras and nearby places, including a group of Brahmans who are in charge of ancient temples there. These people want to remove those Brahmans from their charge of temple-keeping, which has caused them considerable distress. Therefore, upon receiving this order, you must see that nobody unlawfully disturbs the Brahmans or other Hindus of that region, so that they might remain in their traditional place and pray for the continuance of the Empire.’ Aurangzeb further added, ‘According to the Holy law [shari’at] and the exalted creed, it has been established that ancient temples should not be torn down’.

Eaton, after closely examining the historical record, shows that the temples whose destruction Aurangzeb had ordered had been associated with his political rivals. If temples belonging to Hindu political rivals were targetted by Muslim kings, they did not desist from similarly brutally attacking their fellow Muslim foes and rebels.

The history of Muslim rule in India is replete with stories of Muslim kings fighting among themselves. Muslim rebels were treated with equal severity as their Hindu counterparts. Thus, Isami writes in his Futuh us Salatin that when the Muslim general Bahauddin Gurhasp joined hands with the Hindu Raja of Kampila and rose in revolt against Sultan Muhammad bin Tughlaq, his own first cousin, he was flayed alive, after which his skin was stuffed with straw and paraded through the streets, after which his body was filled with rice and fed to the royal elephants.

Hindus and Muslims alike, then, have been equally guilty of destroying places of worship, and, in this regard, as in any other, neither has a monopoly of virtue or vice. The destruction of the mosque in Rajasthan and building a temple in its place, like the tearing down of the Babri Masjid by Hindutva zealots or the vandalism of the Bamiyan Buddhas by the Taliban, shows how sanctified vandalism and medieval notions of the politics of revenge are still alive and thriving in our part of the world.

The 'Daily' Reality Of Partition