Run Out Of Steam? 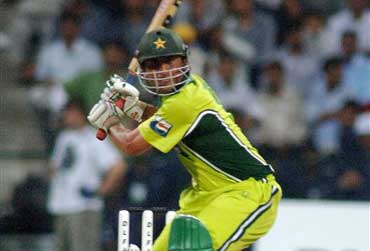 India were dismounted from the high horse of success by a determined Pakistan who cantered to a thumping six-wicket win and took a 1-0 lead in the two match one-day cricket series here today.

The comprehensive defeat, which came barely three days after they capped a 5-1 drubbing of England, left India looking mediocre and also exposed their vulnerability in both batting and bowling.

After scampering to 197 all out in 50 overs, Rahul Dravid's men watched helplessly as their archrivals surpassed the modest target in 48.3 overs riding on a splendid 71 not out by Younis Khan.

As Kamran Akmal (24 not out) hit the winning runs, a four off S Sreesanth, the large number of Pakistani supporters at the Zayed Stadium erupted in joy, waiting as they have been since the last six years to see their team tame India in the desert kingdom.

A Pakistan victory was never in doubt once Inzamam-ul Haq (40) and Younis, the captain and his deputy, got together to string an 86-run partnership, studded with breathtaking shots which had more to do with their abilities than the bowlers' inefficiencies.

Inzamam struck 4 fours in his 73-ball knock while Younis, the perennial Indian nemesis, slammed four fours and a six off 96 balls to assert once again Pakistan's superiority over India at neutral venues.

That India came into the match on the back of 17 wins and just 5 defeats counted for little as Pakistan showed what mattered was the performance on the day, and not past glory. With the next match slated for tomorrow, India would hardly have any time to recoup and ensure they do not sign off what has otherwise been a remarkable season on a losing note.

Chasing the modest target, Pakistan were off to a steady start with openers Shoaib Malik and Imran Farhat milking runs at will against a wayward Indian new ball attack. Farhat picked Pathan for special treatment, slamming the left-hander for three fours in an over to throw him completely out of gear.

But Sreesanth worked up a good pace and was rewarded when he had Malik caught by Dravid in the slips for 12 to give India their first breakthrough and reduce Pakistan to 42 for one. Ajit Agarkar (2/33) then removed Farhat with a perfect yorker that shattered the stumps of the batsman. Farhat made 30 off 41 balls with the help of five fours.

India squandered a golden opportunity to dismiss Younis Khan when an off-colour Pathan failed to flick the ball on to the stumps after receiving an accurate throw from Yuvraj Singh from point, the batsman being yards away from the crease.

Thriving on the chance, Younis took the Pakistani score to 146 before Inzamam was dismissed, caught by Venugopala Rao off Ramesh Powar in the 37th over. But by then Pakistan were already heading towards win, needing just 52 runs for victory in 13 overs. Pakistan lost Mohammad Yousuf just three runs later but India's fate was already sealed.

Earlier, India appeared a pale shadow of its recent regal self, unable to come to terms with either the conditions or the opposition. There were no signs of their recent inspired performances as they were bowled out below the 200-run mark in exactly 50 overs. Had it not been for Rao and Raina, who rescued the team from a pathetic 72 for 4, the Indians would have cut even a more sorry figure. The duo shared a crucial 64-run partnership for the fifth wicket after Indian captain Rahul Dravid won the toss and elected to bat.

There was an ominous ring to the way the Indians gifted away their wickets on a track which had no devils in it. As many as four batsmen were run out while another four were caught while attempting ambitious shots.

Shoaib Malik was the most impressive among the bowlers, taking 3 for 40 including the prized scalp of Mahendra Singh Dhoni (3). India were off to a sedate start as the Pakistani new ball bowlers maintained a tight line and length. The perseverance of the bowlers paid off when Robin Uthappa, hero of India's last one-dayer at Indore, was out to a soft dismissal.

The Bangalore opener tried to loft a Rana Naved ul Hasan delivery but ended up hitting it straight to Mohammad Yousuf at mid-on. Irfan Pathan was once again promoted up the order and the left-hander tried to build up a partnership with his skipper with some intelligent batting.

But their stand came to an early end after a misunderstanding saw Dravid being run out for 20 which came off 29 balls and included 3 fours. Yuvraj Singh failed to sustain his imperious form, edging behind to wicketkeeper Kamran Akmal off Ifthikar Rao for a mere 7 India got another jolt soon when Pathan was also run out, for 26, which included three sweetly struck fours and came off 49 balls. Pathan played down to mid-on and called for a run but Naved-ul-Hasan moved in quickly and his direct throw hit the bowler's end, Pathan out of the crease by miles.

With India reduced to a precarious 72 for 4, it was left to youngsters Rao and Suresh Raina to resurrect the innings. Raina and Rao brought some order into the proceedings and stitched a partnership of 64 runs for the fifth wicket to take India beyond the 100-run mark.

Raina (40) looked confident during his stay at the wicket, hitting three fours which included an exquisitely straight driven four, before holing out Rao Iftikhar Anjum in the deep off Shahid Afridi.

In many ways, since the absence of stalwarts like Ganguly, Sachin, Sehwag and even Kaif, in the recent past it had always been the heroics of Yuvraj, Dhoni and Pathan, apart from the steady hand of Dravid which had ensured Indian batting managed to score. Because these four failed to come good together, which was perhaps inevitable, the steadying efforts of Rao and Raina, in the end, did not prove to be enough. India would know that a batting failure like this was perhaps inevitable given the laws of avergaes, and would hope that at least a couple of these four come good in the next match tomorrow if they are to square the series.

Be that as it may, the match did serve its purpose more than well, with Dhiram 10 million (Rs. 12.28 cr) donated to the victims of Kashmir earthquake last year.