There would now be a flutter in the Indian camp. Australia and the West Indies would not be easy to get past by in the pool. It could also be the challenge they need to come out of their slumber and get themselves moving for the big World Cup in six 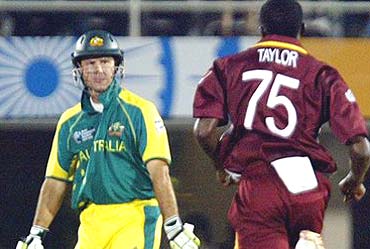 There would now be a flutter in the Indian camp. Australia and the West Indies would not be easy to get past by in the pool. It could also be the challenge they need to come out of their slumber and get themselves moving for the big World Cup in six months time.

You just cannot help but look ahead given the way the West Indies came to the party yesterday. When the Big Boy fires, it sparks a revival in the ranks. Brian Lara led Renuko Morton by hand, his innings was an affirmation that in conditions such as this batting in the lower middle order is the best place for him.

It was a smart batting ploy by the captain who did not fall for the lure of a batting position where he could get the maximum runs being the best player in the side, instead choosing to be a glue in the middle where collective collapses have been routine in recent times. He chose team over the self, maybe having Clive Lloyd as one of the backroom boys has helped.

No less impressive was Adam Gilchrist who showed a break of seven months did no harm to his spirit or form. When he plays in such a fashion, eschewing belligerence and buckling down to innings management; Australia are doubly dangerous. He was a Tiger Woods using the wood sparingly. I hope the example is not lost on younger wicketkeepers of world cricket, like our own Mahendra Singh Dhoni.

Another champion did not go unnoticed but it was for different reasons. Glenn McGrath has rarely been driven over his head or extra cover, much less hoisted over the tent by a number eight batsman in the line-up.

But the 'Pigeon' is just about returning to field after a long absence and the engine is sure to purr back to life soon. Well as Nathan Bracken bowled, Australia would still be better served when McGrath and Brett Lee share the new ball, especially on a surface which are harder as in Mohali. There is all the more reason to give him the brand new cherry now that the pace is slipping.

Better younger players are coming through the ranks for the West Indies which accounts for their recent turnaround.

Dwayne Bravo, that-tricky man Jerome Taylor and the two offies in the bowling pack, Chris Gayle and Marlon Samuels, all of them played critical hand. More and more it is apparent that it would be folly to treat them as a one-pony bowling attack in Ian Bradshaw. The cameos of the others is no less significant.

Australia would be under pressure since their experiment with Shane Watson at the top of the order is not clicking. Ricky Ponting and Andrew Symonds need to do some damage with Michael Hussey up the order. Even, given the vagaries of pitches in Malaysia and India, their relative low scores is unsettling. They have not been able to defend a 434, scores of over 300 have been few and far in between and eight losses have accrued from their 24 games this year.

Put simply, they have lost every third game they have played. Cracks are beginning to show and more and more teams want to find out if the tag of 'unbeatables' is for real. Even though, all would still accept them as favourites.

The Champions Trophy is far from over and it is hazardous to form a report card on teams keeping the World Cup in mind. But the West Indies remains the most improved lot, Australia somewhat wobbly at the top and Sri Lanka and Pakistan two sharp raiders, who could never be discounted.

India need to come out of slumber for they have the team to go the distance.

Finally, it was fascinating to see the Jamaican Chris Gayle wired up against the Aussies. The message was loud and clear. "We kome to play maaan. Kool breeze you know."