Resign Or Be Dismissed

The MP from Dausa says, 'Unarmed people were fired at and killed ... The state government and its officials are lying. The firing took place at seven in the morning. Does a rally ever take place so early in the morning anywhere?' 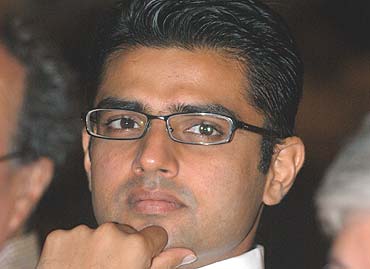 Who is responsible for the violence and firing at Dausa?

Rajasthan chief minister Vasundhara Raje and her government machinery is fully responsible for it. Vasundhara Raje has continuously electorally exploited the Gujjar community by offering them the lollipop of reservations by inclusion in the Scheduled Tribe (ST) list. But she has washed her hands off them when it came to delivering on the promise. First, in the state elections, and then in the Lok Sabha elections, the BJP made this promise and then went back on it. This is what has led to resentment in the people. Despite this, people wanted to put forward their point peacefully, but unarmed people were fired at and killed.

But the government says that the firing had to be resorted to in order to control the violent mob...

The government and its officials are lying. The firing took place at seven in the morning. Does a rally ever take place so early in the morning anywhere? People had been agitated over this issue for a long time but the government just did not do anything about it. The chief minister is too busy getting herself worshipped. This did not even happen in the British period.

What has the centre done about the demand of the Gujjars? How does the Congress look at it?

These people are in Rajasthan and the primary responsibility is of the state government. They state should send a proposal to the central government. The state Congress president BD Kalla has already said that if the government brings forward any proposal, the Congress would welcome it.

What do you plan to do now?

The Vasundhara government has been unsuccessful in fulfilling its constitutional duty. We demand that chief minister Vasundhara Raje should immediately resign. And if she does not do that, the central government should intervene and dismiss the Rajasthan government. There is no law and order in the state. I plan to talk to the Congress president Sonia Gandhi and other senior leaders as well.

Is the Congress party not trying to cynically exploit this sensitive issue for political advantage?

Vasundhara Raje and the BJP have politically exploited this issue. Now they are feeling the heat of having played divisive politics. Vasundhara Raje is so sensitive that not even a peon of the government was sent to move the dead bodies or to move the injured to hospitals. The Congress is standing with the people against this insensitivity and police brutality.