Barack Obama has begun well, but his Administration will have to undertake many grand strategic decisions in the next four years. Will he able to translate his huge popularity worldwide towards creating a global agenda which has the support of nation 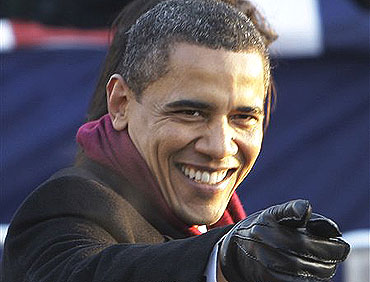 On January 20, 2009, the first African American, Barack Hussein Obama assumed office as the 44th President of the United States (US). The moment was historic. Not only did the US get its first African American President, but also its first African American first lady and first kids. The first few months of the Obama Administration will therefore be emotionally significant as it will be seen in the years to come as a turning point for racial equality in the US. Indeed, that the son of a black man from Kenya will one day become President of the US was unthinkable for many African Americans. Obama himself referred to this aspect in his inaugural address when he stated that "a man whose father less than 60 years ago might not have been served at a local restaurant can now stand before you to take a most sacred oath."

January 20 will also be remembered by an older generation of African Americans as the triumph of their decade old struggle in the 1960s for equality and dignity. Fighting against all odds, they made it possible for their children (read Obama) to aspire for the highest possible public calling in the US; that of the President. However, one might have plausibly never witnessed an Obama Presidency had two famous speeches not preceded it,  46 and 44 years ago, respectively: Martin Luther King Jr.’s famous "I have a dream" speech of August 28, 1963 and President Lyndon Johnson’s speech to a joint session of Congress on March 15, 1965. Luther’s speech perhaps inspired President Johnson to defy his own 20 year record of denying African Americans their civil rights and bills aimed at ending lynching. In a surprise move, Johnson demanded of Congress the night of March 15 to pass the bill granting the right to vote to African Americans.

It was a move showcasing the political mastery of a man, who perhaps was deliberately anti-civil rights early in his political career in order to remove any opposition from the strong Southern states to his aspirations for presidency. Subsequently, Johnson knew that as President of the United States, he would possess the ultimate power to undo injustices he perhaps could not have reverted in any other lower political position. Hence, on March 15, he unequivocally told Congress that he meant to use the chance as President to give African Americans the "right to vote" arguing that "There is no Negro problem. There is no Southern problem. There is no Northern problem. There is only an American problem. And we are met here tonight as Americans--not as Democrats or Republicans; we're met here as Americans to solve that problem". On August 6, 1965, President Johnson signed the Voting Rights Act removing any kind of barriers used to deny African Americans the right to vote. By doing so, he fulfilled Martin Luther King’s dream for freedom and enabled men like Obama to aspire for Presidency of the US decades later.

The Idea of Democracy

What do these historic moments tell us about democracy? For starters, these moments starkly reveal the democratic promise that every citizen regardless of background could make it to the top of his or her chosen field without discrimination based on race, gender or class (an aspect which is also enshrined in Article 15 of the Indian Constitution). Democracy is about a grand design for human empowerment based on merit and one's own life choices. In all of this, the right to vote is perhaps the most critical. It offers citizens the right to choose their own leaders. However, if democracy is based on an unequal social structure, which men like Mahatma Gandhi, B.R. Ambedkar and Martin Luther King Jr. fought against, the texture of that social inequality would have a direct bearing on a society’s politics and the ethos of democracy. Worse still, the democratic state based on an unequal social edifice would then profoundly shape the way individuals look at the democratic state as well as their own social possibilities. Consequently, the end result would be a social narrative about democracy’s failure to undo social injustices and inequalities. The truth is however far from it. Social injustices and inequalities are more due to the corruption, mediocrity, and lack of imagination amongst the political class than democracy per se. Obama’s Presidency is significant in this sense as it reflects the stubborn commitment by many African Americans to hold fast to their struggle for dignity, social equality and respect during those tumultuous years of the civil rights movement, the final spark of which occurred in Selma, Alabama on March 7, 1965 when many African Americans were brutally assaulted by the police as they prepared to march from Selma to Montgomery to peacefully demand the right to vote. But they did not give up on their peaceful protests due to a violent state response energizing their struggle with the song "We shall overcome".

Grand Strategy of the Obama Administration
Amidst the emotional and historic euphoria of the inauguration, the political and strategic question that comes to mind is this: - Can the Barack Obama Administration, propelled by internal and external goodwill, provide leadership to a world on the brink of a major financial crisis, and steer a path out of the perils of environmental degradation, resource scarcity, nuclear proliferation, and terrorism? In his inaugural address on January 20, Obama struck a sombre note on the state of world affairs noting that issues like a weakening world economy, climate change, poverty, terrorism, wars in Afghanistan and Iraq and the Middle East crisis will require a "new era of responsibility". He urged the developed world to take up more responsibilities for the crises around the world. After already signing executive orders directing the Central Intelligence Agency to shut what remains of its network of secret prisons and ordering the closing of the Guantánamo detention camp within a year, some of his priorities as President include withdrawal of troops from Iraq and a troop surge in Afghanistan, pressuring Pakistan to act against terror networks within its territory, and re-inventing the diplomatic option as a restraint and more humane tool of statecraft with regard to international relations.

Close on the heels of Obama’s victory on November 04 last year, the National Intelligence Council, America’s leading intelligence organisation released its report titled Global Trends 2025 A Transformed World on November 21. The report describes factors like the rise of new powers like India and China, the decay in global institutions, climate change and the geo-politics of energy as the prime drivers for future strategies of the Obama Administration. By 2025, the report envisions the end of a single international community and that many nations will be attracted to the Chinese model instead of the Western model of development. In fact, the NIC report posits that while the US will remain the single most powerful country in 2025, its dominance or primacy will be eroded by new powers like China, India and Brazil and to an extent Russia.

With regard to West Asia, the report indicates that the advent of nuclear proliferation in the region could result in an arc of instability. Hence, it is rather crucial that the US plays the role of an effective balancer although by 2025, countries like Russia, India and China will also have a much larger role to play in the region. The report offers an interesting perspective on terrorism worth mulling over. Though by 2025, terrorism will not disappear, the report suggests that growing employment in West Asia will deter youths from taking part in such subversive activities. However, it cautions that unless tight controls are ensured at a systemic level on the spread of chemical, biological and nuclear technologies, the likelihood of such technologies falling into the hand of terrorists cannot be ruled out. The report is wary of a nuclear Iran and warns that low intensity conflicts like the Israel-Palestine conflict taking place under the shadow of a nuclear umbrella in the future could result in conflict escalation.

The report also indicates "uncertainties" facing the world like the consequences of climate change, the rise of resource nationalism and its consequent potential for great power confrontation, the rise of nationalism in China, the re-emergence of Russia, the weakening of NATO with declining European military capabilities, and the rise of strong regional organizations like ASEAN vis-à-vis the increasingly Western oriented organizations like the UN and the IMF.

In meeting these challenges, the NIC report stresses on the role of leadership as the key factor, be it leadership by regional blocs like EU or ASEAN or SAARC, NGOs, individual state leaders or common citizens. The growing strength of China, Russia and India propelled by their version of "state capitalism" based on the prominent role of the state in economic management will also nudge them to take up leadership roles in meeting many of these challenges facing the world. The report boldly states that the international system in 2025 will be drastically different from what it was at the end of World War II with a transfer of relative wealth and power from West to East and the gaps in power narrowing down between the developed and developing world. (This is interesting given the fact that such an assertion is being made by the NIC and not some analyst of the developing world). Though the report argues that the present financial crisis will not emulate the complete breakdown of the international system in 1914-1918, which ended the earlier phase of globalization, the next 20 years or so of transition from an American dominated post-cold war world to a post-American world is not going to be easy.

The Obama Administration will therefore have to undertake many grand strategic decisions in the next four years if it wants to renew America’s image as a responsible state in the system. This has to include a more progressive policy on immigration, tackling the core issues of energy, climate change, nuclear proliferation, terrorism and global insecurities propelled by the Bush Administration’s "doctrine of pre-emption". Obama must also re-visit many of the Bush strategies wrapped around the "War on Terror" and reframe the last eight years’ US unilateral policies within a multilateral framework. The legitimate role of the UN in global affairs must be accepted and supported unlike Bush’s aversion to any form of UN advice. Much of this renewing will however depend on how Obama can translate his huge popularity worldwide towards creating a global agenda which has the support of nations like India, China, Brazil and Russia. A multi-polar world will require such cooperative policy approaches as the challenges of the 21st century are inter-related requiring a coordinated response from states.

Dr. Namrata Goswami is an Associate Fellow at the Institute for Defence Studies and Analyses (IDSA), New Delhi. The views expressed here are that of the author and not necessarily that of IDSA