Once, when the tail-ender Glenn McGrath was out for 2 runs, Benaud quipped, “Just 98 runs short of his century!” 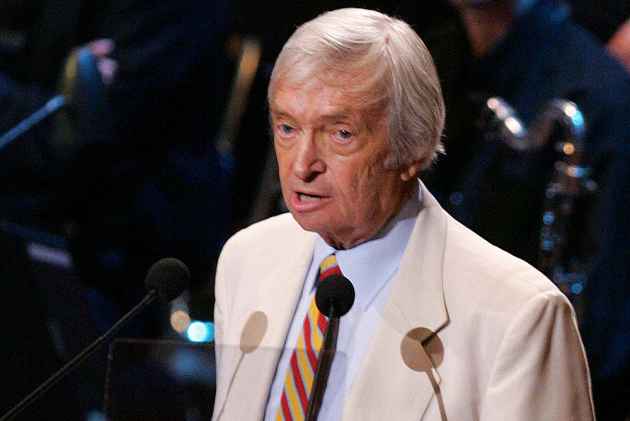 Much has been said about Richie Benaud as a cricketer. More has been written about his captaincy. But sports enthusiasts, young and old alike, never seem to tire of talking about Benaud the legendary broadcaster. And why not. He was, after all, the most celebrated iconic voice of cricket.

Maybe being a player helped the Aussie become a better commentator. But considering his profound knowledge of the game and its finer points, his supreme command of the language and his enviable gift of the gab, he would still have become a successful broadcaster even if he had never played cricket.
One December 1982 evening, Benaud was standing outside the Channel Nine commentary box in Sydney, taking a break after a 30-minute stint at the microphone, when a dozen youngsters came up and asked for his autograph. Obliged, the first five said “thanks” and were away and then the last one, “a fair-haired, angelic little lad of 12”, collected his treasure and looked up.
??“Did you ever play cricket for Australia, Mr. Benaud?” he asked a stunned Benaud.
“Yes, I had played up to 1963, long before you were born,” replied Benaud, after wondering whether to “cry or laugh” and doing neither and merely stated the fact.
“Oh,” the lad said. “that’s great. I thought you were just a television commentator on cricket.”
Benaud asked the lad if it was his first cricket match. But the lad said he had been to watch every match he could in the past three years and he had seen every possible match on television.
Hence the question. The master raconteur realised that the lad had never seen him in cricket gear and knew him only as the man who did the cricket on Channel Nine. The lad scampered away with a “thank you” thrown over his shoulder.
??Benaud, who represented Australia in 63 Tests between January 1952 and February 1964, went on to witness over 500 Tests and umpteen One-Day Internationals.? ?Having donned the broadcaster’s hat in over 450 Tests, the weight of Benaud’s experience was formidable. It reflected on any aspect of cricket he would discuss with a quiet dignity and authority. His insights were as fascinating as his opinions were forthright.
?It would be only to state the obvious to say that Benaud was born to broadcast beautifully on the beautiful game and its practitioners. He had a keen eye for observation, a subtle sense of humour and a brilliant analytical mind.? ?Benaud, who began working on the BBC radio in 1960 while still active as a Test player, went on to establish himself as the world’s finest television broadcaster after he switched the medium in 1963. If anything, he lent a new dimension to television broadcasting, becoming the face of cricket for more than 40 years both in England and Australia.
The 1960s and 1970s were particularly dominated by the BBC radio cricket commentators. The likes of John Arlott and Brian Johnston, who commanded a mind-bogglingly large following, were household names across the cricket world.
In the early 1960s, Benaud was also a household name, albeit as a player. However, slowly but surely, without being unnecessarily perturbed, he began the process of elevating the art of television commentary to a higher plane.
?
Benaud was no poet, unlike Arlott, but he knew well what was expected of him. Second-best had never occupied a pride of place in his book. Both as a player and as a captain he belonged to the highest order. So, he similarly carved a special niche for himself as a television broadcaster.
Not only did he succeed in transforming television commentary into an art form but also gave it a status, a personality, as it were. He himself was the prototype of an ideal television broadcaster and from very early in his career began to be considered a role model for many pretenders, including former cricket and other players, to live commentary on the small screen.
In Australia, he became the mainstay of the Channel Nine television team since 1977, when the media baron Kerry Packer launched his rebellious, trailblazing World Series Cricket.
Unlike a majority of broadcasters, who overuse the terms “magnificent” and “fantastic” when describing a fine shot or a good delivery, Benaud usually employed simple words with a similar but telling effect. He would maintain his signature sangfroid amid high drama and excitement, speak minimally and let the picture tell its own story and allow the viewers to judge for themselves. “My mantra is very simple. If you can add to what’s on the screen, then do it. Otherwise shut up,” he said when asked to sum up his commentary style.
A professional to the core, Benaud always appeared to be as serious as a painter engrossed in his work. Often razor-sharp in his criticism, Benaud was equally sharp-witted, which added to his already brilliant broadcasting and analysis.
During Ian Botham’s epic, heroic 149 not out in the third Test at Headingley, Leeds, in the historic Ashes series in1981, Benaud described one of the star allrounder’s only six in the innings with these words: “Don’t even bother looking for that. It’s gone into the confectionery stall and out again!”
??Once, when the tail-ender Glenn McGrath was out for 2 runs, the irresistible Benaud quipped, with his tongue firmly in cheek, “Just 98 runs short of his century!”