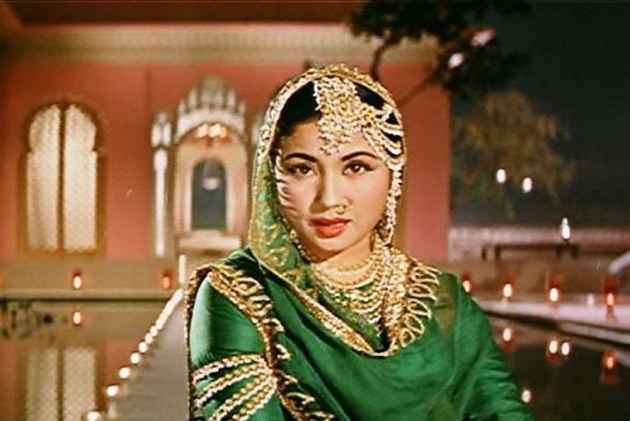 On her 85th birth anniversary today, Google remembered legendary actor Meena Kumari with a special doodle that captures her in a pensive mood, reminiscent of an iconic scene from "Pakeezah"

She was only six when she made her acting debut with "Leatherface". Since then, she has appeared in more than ninety films and is best remembered as the tragedy queen of the Indian film industry.

Pakeeza (1972): It is not only regarded as Meena Kumari’s best movie, but it is one of the most extraordinary musical melodramas of the Indian film industry. The movie, it has often been said, has the power to transport you to the word of fantasy. The movie was directed by writer and director, Kamal Amrohi. Here she plays the role of Sahibjaan, a prostitute who wishes to run away from the brothel.

Kohinoor (1960): Meena Kumari and Dilip Kumar play prince and princess of different kingdoms. Otherwise known as the tragedy queen, here Meena Kumari for a change is remembered for her comical scene.

Azaad (1955): A comical film starring Meena Kumari and Dilip Kmar, Azaad was produced and directed by Sriramulu Naidu S.M. It is perhaps one of the only films, where the characters never cry.

Sahib Bibi Aur Ghulam (1962): The film stars Guru Dutt, Meena Kumari, Waheeda Rehman and Nazir Hussain. It is based on the Bengali novel Sahib Bibi Golam by Bimal Mitra. This movie was critically acclaimed, but was a flop at the box office. Meena Kumar’s performance as Choti Bahu was regarded as one of the best performances of Indian cinema.

Dil apna or Preet Parai (1960): This is a romantic drama film by Meena Kumari which was produced by S. A. Bagar and directed by by Kishore Sahu. Here she plays the role of a nurse who doesn’t get married to her lover.

Kaajal (1965): Meena Kumari won her fourth and last Filmfare award for this movie. The film is adapted from Gulshan Nanda's novel ‘Maadhavi’. It was declared a hit at the box office.

Parineeta (1953): Based on the Bengali novel of the same name ,Parineeta was written by Sharat Chandra Chattopadhyay. In what is seen as one of her best works, Meena Kumari plays the role of an orphaned niece of a poor clerk.

Gazal (1964): The Urdu-Hindi musical film directed by Ved –Madan is a Muslim social film starring Meena Kumari and Sunil Dutt. The movie talks about the right of young generation to marry a person of their choice.

Baiju Bawra (1952): Here Meena Kumari plays the love interest of Bharat Bhushan who plays the role of Baiju. Though the movie was based on the legend Baiju Bawra, there were a lot of changes made in the movie. Directed by Vijay Bhatt, the music of this movie is absolutely divine.