'So no one killed me, then? What am I doing dead?' That's perhaps what Irfan would have concluded, given the shoddy way the police handled the case that resulted in the shocking verdict by the trial court acquitting all the five people accused of mur 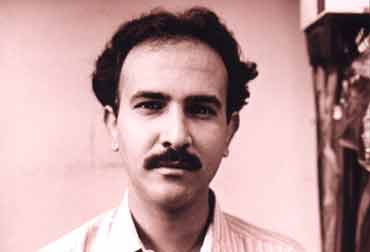 It's a familiar story. On the surface, yet another witness turning hostile, yet another botch-up by the police, yet another case collapsing. The difference is that this one cuts too close to the bone. For it was a colleague who was murdered, only because they wanted to rob him of his car. The case had been going on for seven long years.

The verdict by Additional Sessions Judge Talwant Singh who acquitted all the five people accused of killing Outlook cartoonist Irfan Hussain was eerily reminiscent of the Jessica Lal case. The judge said the prosecution had "not been able to link the accused with the commission of crime beyond reasonable doubt". He also said that the prosecution’s version of events looked like a "scene from a book or a movie".

The similarity did not end there. This one too had a key witness who turned hostile: one Banwari Lal, in whose presence Irfan’s bag, according to the police, had been recovered from the house of one of the car-jackers,

The police scenario was that the gang of five - Mohammad Mustafa Ansari, Heera Singh alias "Bullet", Sanjay Kumar, Mohammad Jaseem and Mohammad Sahid - had spotted Irfan's car as he drove along the highway near Gazipur Dairy Farm on March 8, 1999. According to the police, the gang tried to stop and rob him and when Irfan resisted, he was brutally stabbed 28 times, strangled, and his body was dumped as they drove off with his car.

The police claimed to have cracked the case when a car-thief Fahim was caught by the Krishna Nagar police in Kashipur, Uttar Pradesh, and, based apparently on his confession, Irfan's car was recovered from Anantnag in J&K. About how this was handled, the court remarked:

"Now, whom should the court believe, a responsible Sub-Inspector from Delhi, Vivek Tyagi, who recovered the car after covering a distance of only 50 to 60 yards from the checkpost, or SI Ramesh Lal, who came all the way from Jammu and Kashmir and deposed that the car was chased up to one-and-half km and thereafter the driver made good his escape?"

In any case, Fahim had also, according to the police, named the others in the gang who were already being tried for another car-theft case. They were arrested on December 14, 1999 for Irfan’s murder. The police claimed that all those arrested, part of an Udham Singh Nagar-based gang of highway robbers operated on lonely highway stretches around Delhi and adjoining areas, and disposed of the robbed cars in J&K.

Banwari Lal went back on his testimony in September 2003 in court. He denied that he was present at Sanjay Kumar's house when the bag was recovered. In cross-examination, when confronted with his signed statement, he claimed that the police had made him sign on a blank piece of paper. It was on the basis of this turnaround that the court dismissed the prosecution claim over the recovery of Irfan's bag and belongings.

It was a classic case of police ham-handedness, with no co-ordination worth its name. After he left office on March 8, 1999, and did not reach home, Irfan's wife Muneera had filed a missing person complaint at Sarojini Nagar Police Station on March 9, 1999. On March 10, this was changed to a kidnapping FIR.

Irfan's body was finally found in Gazipur, and because of the jurisdiction issues, the Kalyanpuri police-station opened a murder case on March 13. Instead of transferring the original kidnapping case from Sarojini Nagar to Kalyanpuri, they continued with what they called their investigation after simply adding Section 302 (murder) to the kidnapping FIR. They were to transfer the case to Kalyanpuri only on December 8, 1999.

The Krishna Nagar police, the one responsible for catching Fahim and recovering Irfan's bag and belongings, meanwhile started its own investigations after registering a robbery and murder case. There were thus as many as three police stations which were all carrying on their investigations because of "jurisdiction issues". And yet simple things such as taking the blood-samples of the accused and matching them with the blood-stains found on the car were not done. It was not till September 1999 that they transferred the case to Kalyanpuri.

Irfan’s wife Muneera had even filed an application with Delhi High Court in August 1999 expressing dissatisfaction over the progress of the probe into the murder. She had sought the transfer of the case to the CBI. She had later disputed the police version of events, saying Hussein’s murder was more than a highway robbery that ended in murder.

Even if it was a random highway robbery as per the police version that ended up in such a grusome murder, the trouble is that the glaring discrepancies and contradictions in various police accounts only underline the fact that it was not because of just one witness turning hostile that the case collapsed, but because the police botched up the case with its shoddy handling when the bare-minimum of a rigorous hard-nosed investigation that tied up the loose-ends would have ensured conviction of the accused. But perhaps all that is best saved for a later date, for this is the time to reach out to the grieving family and friends and decide what legal steps can be taken to ensure that Irfan's murderers are brought to book. Perhaps Irfan would just have commented wryly that the judgment was delivered merely a day too soon.