Three wickets for one run in nine balls at the fag end of the day helped India undermine Ashwell Prince's fighting 98 not out and scuttle a South African fightback. 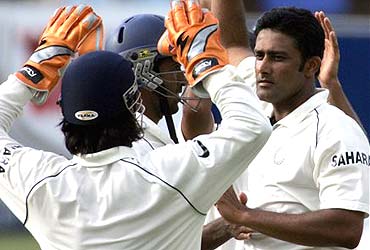 Middle-order batsman Ashwell Prince, who stood like a rock to be unbeaten on 98, led the recovery act after some early jolts but the visitors ensured that they ended the day on a satisfying note by reducing South Africa to 257 for 8 before bad light stopped play.

India had the hosts in early trouble, reducing them to a pathetic 28 for 3 after Graeme Smith had won the toss and elected to bat on a hard, bouncy Kingsmead track.

The South Africans regrouped, thanks to the efforts of Prince and Herschelle Gibbs (63) but lost three wickets for only one run in nine balls at the fag end of the day.

Bad light brought up an early close to the day's proceedings with 17 overs for the day still to be bowled.

Prince underlined his value to the side and had two substantial stands of 94 and 100 for the fourth and fifth wickets with Gibbs and Mark Boucher (53).

The tidy cricketer from Port Elizabeth had a huge slice of luck when on 41, in the team total of 145 for 4, he was dropped by Sachin Tendulkar in the first slip off VRV Singh.

Tendulkar then went to a hospital for a precautionary check up. He has only a bruised thumb and would be able to bat.

South Africa were pushed on the backfoot right at the start of their innings with Smith's wretched form against the visitors continuing unabated.

The left-handed opener once again fell to his nemesis Zaheer Khan, this time hooking him poorly for Tendulkar to run backwards and complete a fine catch.

Zaheer made it a twin strike when he claimed a leg before decision against Hashim Amla (1), the batsman still trying to find his feet in the series.

The experiment with AB de Villiers as opener was a failure as the right-hander edged a catch to slips off S Sreesanth for 9 as the hosts slipped to 28 for 3.

Then came the stretch of recovery for South Africa as Gibbs, finding his bearings after a hesitant start, tore into the Indian bowling in the second session.

Gibbs was batting with increasing freedom when he under-edged a pull off Sreesanth into the hands of wicketkeeper Mahendra Singh Dhoni. His 63-run knock came off 88 balls and 143 minutes, including 13 fours.

Fortunately for South Africa, Boucher held his ground and another recovery was underway before South Africa made a hash of it in the final session.

Boucher had just steered Sreesanth to the third man boundary for his half century before his stumps were sent cartwheeling by the feisty Kerala youngster.

Shaun Pollock went for his shots from the word go and after slamming two fours off VRV, went for one too many and was caught brilliantly overhead by Virender Sehwag in the cover region.

Anil Kumble then went about polishing the lower half, claiming Andrew Hall (0) and Andre Nel (0) in one over to put the skids under the hosts.

Earlier, South Africa suffered a blow with Jacques Kallis pulling out of the tie because of a back strain. Hall was drafted in as his replacement.

India fielded an unchanged side from the one which won the Wanderers Test by 123 runs.

The wicket did not have the pace and bounce which the experts had predicted but towards the close of play the moisture had evaporated and it had started quickening up.