Is it time for Team India to celebrate, because of speed demon Shaoib Akhtar's last minute pull out? Or for his captain, who may may well have done a whoop in private? 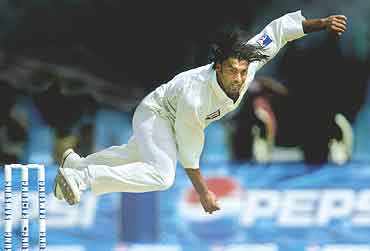 Is it time for Team India to rejoice, because speed demon Shoaib Akhtar is not coming, not for the Test series at least? After all, Akhtar first made his name in international cricket when he took out Rahul Dravid and Sachin Tendulkar off successive deliveries in Calcutta when Pakistan toured India last in 1999.

Not quite. Akhtar’s absence may augur well, but for his own team. It works at two levels: the trade that Akhtar practices and his personality.

Akhtar is a superstar and a crowd puller. But these are not happy times, especially in Test cricket, for the practitioners of his trade, viz, a contest with the speed gun. A look at the new ball attack of the leading teams tells a story.

The West Indies, caught in a longish decline in fast bowling, may not be a suitable example. But speed kings are not really ruling at the other traditional bastions of fast bowling either.

Australia, the undisputed world champions, have Glenn McGrath as their pace spearhead. In the fourth innings of his career, McGrath sits atop the world rankings for both Tests as well as one-day internationals. That is purely on the strength of his awkward bounce from a three-fourths length and unerring accuracy six balls an over. It is doubtful whether he feels a twinge of excitement upon looking at the speed gun figures, where he gets timed between 130 and 135 kmph.

McGrath’s partner, Jason Gillespie, is fastish, frequently breaching 145. But the back-up seamer, Michael Kasprowicz, is a 135 kmph bowler. These three have kept out Akhtar’s number one rival in speed sweepstakes, Brett Lee, who gets to practise his craft only in ODIs.

South Africa, whose history is full of fast bowlers, rely on Shaun Pollock for the early as well as late breakthroughs. And Pollock hardly ever crosses 130.

England are happy to hand over the new ball to their slowest seamer Matthew Hoggard who, in South Africa, more than justified the faith. For a large part of last year, Steve Harmison promised a speed revival. But his performance this year has been a huge disappointment, so much so that by the last Test in South Africa, Andrew Flintoff was sharing the new ball with Hoggard.

Akhtar has to realise that speed does not take a bowler very far these days. Among the top wickettakers in Tests last year, only Harmison at No. 2 and Gillespie at No. 4 were genuinely fast. Anil Kumble was at the top of the heap with three other spinners and four medium pacers completing the list.

The list of top wicket takers in ODIs has only three genuine fast bowlers: Gillespie at No. 5, Akhtar’s partner Mohammad Sami at six and Akhtar himself at eight. India’s medium pacer Irfan Pathan and Sri Lanka’s swing king Chaminda Vaas were number one and two. Two other medium pacers and three spinners completed the list.

Teams no longer get dazzled by speed. Instead, they put their faith in bowlers who are willing to go the extra mile and do a job for the team. On these parameters, Akhtar does not exactly cover himself in glory.

He got completely overshadowed by Pathan and L. Balaji when India toured Pakistan last year and by every member of the Australian attack when Pakistan toured Australia this year. Leg-spinner Danish Kaneria was the Pakistan team’s darling Down Under.

Akhtar’s stubborn refusal to shorten his run-up despite a plea from coach Bob Woolmer and in the face of a sword hanging over the captain’s head for slow over rate in Australia – the fast bowler said he could not bowl off a shortened run-up just as a jet plane could not take off without a longish run – has not put him in Haq’s list of people to be sent Id-ul-Fitr gifts.

Besides, it has been a long time since Akhtar completed a full Test series. The most glaring of his injuries came in the last Test against India in Pakistan last year. He refused to bowl in the second innings citing an injury whose location kept shifting. Then he came in to bat and whacked the ball to all corners of the ground without any sign of discomfort. It was only a bone scan showing an injury in the ribs that saved him.

Haq, with his stoical attitude, is a fine batsman under pressure, but struggles to bind his team into a cohesive unit. Younis Khan replacing Yousuf Youhana as vice-captain adds to his woes. Haq and Khan had got into a public scuffle during practice when in South Africa for the World Cup in 2003. At this juncture, the skipper can do with one headache less.

If Sami, whose speed is comparable to Akhtar’s, and Rana Naved-ul-Hasan, who swung the new ball at impressive pace in Australia, can do the job for Pakistan in this series, Shoaib Akhtar might join his rival Brett Lee on the sidelines for some time. That is unless Saleem Altaf, who discovered Akhtar in 1997-98 and has been recently appointed the director (operations) of Pakistan Cricket Board, can swing it for his ward.