Every year, memories of the late Ayrton Senna are rekindled when the Formula 1 circus rolls into Imola. 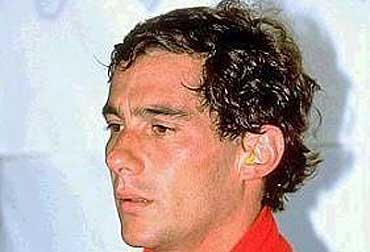 Anniversaries tend to rekindle memory, of days gone by, of people who touched our lives, of places and spaces we inhabited, and of events that left an indelible mark on our lives.

Every year, when the Formula 1 (F1) circus rolls into Imola in the tiny European country called San Marino, time rewinds, to one fateful May afternoon in 1994. As the cars, sleek and colourful, sweep around the Imola track, the mind starts to pick up shards of a life shattered on the sweeping Tamburello corner on that balmy day.

It remembers a white and blue Williams F1 car, driven by one widely acknowledged to be among those rare grand prix drivers always ahead of their car, hurtling off the track at great speed at Tamburello, cannoning into a wall and breaking into pieces, killing its driver. It was the last time Ayrton Senna would scorch the earth with his phenomenal talent.

Death has always been a wilful passenger for race drivers, and will always be, but over the years it had started to show some mercy. It had been nearly eight years since F1 had seen a race driver die on the track, such had been the advances made in safety by teams and race authorities.

To see two young lives come to pass way before their time during that weekend in Imola (the day before Senna's death, Austrian rookie Ronald Ratzenberger, driving for new team Simtek, lost his life in a high-speed shunt in practice) was cruel and tragic. The lights went out in F1 that weekend.

The lights did come back on, such is the circle of life and the business of sport. Rich tributes were paid to Senna by fellow drivers and fans, the fragility of a race driver's life was acknowledged, safety measures at grand prix tracks were reviewed, and racing resumed. Other men, notably one Michael Schumacher, did their bit on the racetracks to fill the void left by Senna. Try hard as they might, they still haven't. There can never be another Senna.

Senna saw racing as a metaphor for life. He drove a race car as if his life depended on winning it. There was a kind of purity in his quest to be the fastest driver in the world and go the fastest that he could -- and those are two separate things -- that almost bordered on the spiritual.

This single-minded higher pursuit is beautifully illustrated in Senna's repeated articulations of his quest for that 'perfect lap'. Here's a particularly moving passage from Formula 1: The Autobiography, the superb F1 anthology edited by Gerald Donaldson: "Before a qualifying lap, everything within me -- my personality, my education, my strong points, my weaknesses -- makes it fundamental to me that I concentrate as deeply as I can. I isolate all outside interference, whether it's photographers, fans or people around me. And in that state I am somehow able to get to a level where I'm ahead of myself -- maybe a fifth of a second, who knows? When my car goes into a corner, I'm already at the apex, and so on. It's the same whether I'm braking, changing gears, putting on the power, or whatever. In effect., I'm predicting what I'm going to face so that I can correct it before it actually happens."

Senna was doing what every other driver on the grid was doing, which is to try and win races. Except his way of doing it was different. For the enigmatic Senna, racing was a creative expression during which he sought harmony with his car, so as to be at peace with his inner self and the world. In that grand design, winning was all, it was when he was most at peace.

With such large stakes, he nearly always drove like a man possessed, with an unwavering focus and a pent-up intensity, which he managed to channel into his racing with good effect. On his part, he would never be willing to concede an inch. But when another driver gave him even so much as half an inch, he would jump in and take a mile.

It's hard to recall another driver who pushed the limit so relentlessly, with so much consistency--and success. Martin Brundle, who had many a scrap with Senna in F3 racing, once said of him: "Senna is a genius. I define genius as just the right side of imbalance. He is highly developed to the point where he is almost over the edge. It's too close to call."

Indeed, Senna's contemporaries would call it both ways. His extraordinary natural ability to control a car at high speeds would earn him praise, but his stubborn attitude would also be the root source of friction with his arch-rivals, many of whom labelled him as unsafe to race with. Alain Prost, Senna's teammate during two torrid seasons at McLaren and his chief rival, once said: "Senna has a small problem. He thinks he can kill himself because he believes in God, and I think that's dangerous for other drivers." During the late-eighties and early-nineties, Senna and Prost would clash repeatedly, both literally and metaphorically, both on the track and away from it. And it would make for compelling viewing.

Sport thrives on competition. Over the years, F1 has seen its share of rivalry, though not with the constancy seen in most other sports. Blame it on technology, which has made machine the more significant variable than man in the winning equation. In F1, seasons that saw the two best drivers in equally matched cars, to make it an even fight, have been extremely elusive.

One such rare season was 1988, when McLaren boss Ron Dennis, in a move that could be as described as amazingly bold or plain foolish, signed on Senna to partner Prost. The two best drivers in the two best cars -- but seen another way, also on the same team, in identical cars. "Ego management" is how Dennis would later describe his job.

That year, McLaren won 15 of the 16 races, of which, Prost won 7. Senna won 8, and the championship, amid perpetual bickering with Prost fuelled by differences over the ethics of driving and racing. Veteran race driver John Watson would say on Senna's maiden championship win: "If anybody ever sold his soul to win a championship, Senna did. The commitment was just frightening… Now that he's done it, and has the chance to turn down the wick that he's been burning so intensely all year, he may be able to go on to this thing called greatness and become the greatest driver of his era."

But Senna, ever so ambitious and never one to settle for small spoils, wasn't ready to turn down the wick, not till such time as Prost was in sight. The two scrambled for top honours for two more gripping seasons, along the way tangling with each other numerous times, breaching articles of faith and generally doing everything other than throttling each other.

The difference in technology eventually got to F1, as McLaren faded away. Williams picked up their game, and Nigel Mansell and Prost won the title for the team in 1992 and 1993, respectively. But the fallout of this technological divide was that the duels on the track became less intense. And so did the rivalries, as the men mellowed with age.

At the start of the 1994 season, Senna was the only one of the old guard left. Nelson Piquet and Mansell had retired. As had Prost, in quite undeserving circumstances, unwanted by all top teams. Between themselves, this foursome had 11 championships and 146 race wins to show for their endless miles on the track.

Suddenly, Senna was the elder statesman in F1, back again in perhaps the best car on the grid (Williams), and without a proven contender in sight. There were plenty of young cats on the blocks, with the biggest of them being Schumacher. The old hand versus the new gun. It was a rivalry that held huge promise, and the prowess of Schumacher as a driver over the years has only furthered the impression that had it run its natural course, the rivalry could well have been Senna-Prost all over again.

Alas, a promise is all that it remained. Senna crashed out in the first two races, leaving Schumacher to take the spoils. On May 1, 1994, in the season's third race at Imola, Senna fatally crashed out at Tamburello while leading the race from Schumacher, who once again won. Quite fittingly, Schumacher took over the baton from Senna and has been the single-biggest reason for sustaining the sport's popularity since.

Ironically, as he heads into Imola this weekend, Schumacher finds himself in somewhat the same situation as Senna in 1994. Schumacher's proven that he's the best driver of his era by a country mile and also one of the best of all time. He's broken virtually all race records. He's got the quickest car on the grid, but rare driving errors, inclement weather conditions and new rules (designed to check his and Ferrari's dominance) have resulted in an indifferent showing so far. And there's a new challenger on the blocks, in the shape of Kimi Raikkonen.

Schumacher, like Senna, is adept at pushing the limit and finding time where his contemporaries might not. The German also makes fewer errors during a race, unlike Senna, who often played the all-or-nothing card and flirted with danger so very often in his endless quest for excellence. It was such dare-devilry and commitment that would endear him to race fans.

Even nine years after his death, Senna's spirit lingers on in tracks around the world. Fans fondly recall the mercurial Brazilian, his sharp racing and his often deep ruminations on life and racing. "Once I heard someone say that the ideal would be to have two lives: one you learn with, the next one you use all the experience in the first, and you don’t make the same mistakes again. It was a very easy statement, you know. It's right, but it's not perfect. You need a third life, and a fourth, because you wont ever get to the bottom of it…"