India have lately been thinking out of the box. The options due to experiments have steadily piled on in the last six months. 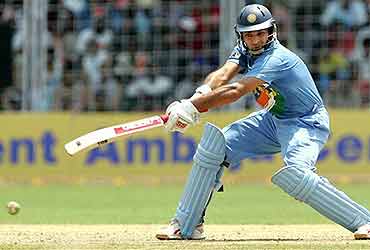 India have lately been thinking out of the box. Thus, we had five specialist bowlers in Goa, Rahul Dravid was sent in at the top and the batting was reduced. Yet they scored nearly 300 on a pancake of a pitch where the French version of cricket would have been more in order.

Dravid may or may not become a regular opener from now on. But Team India have now yet another option. The options due to experiments have steadily piled on in the last six months.

Initially it was a new man at number three in every game; then came the floating role of Irfan Pathan in the batting order, Virender Sehwag batted in the middle order against South Africa, Mahender Singh Dhoni and Suresh Raina have taken over the mantle of "finishers" from Yuvraj Singh and Mohammad Kaif and an assembly line of medium-pacers have been discovered. And yes, they are even playing two regular off-spinners!

Besides, it must only be a bonus that this is the best Indian fielding side I have ever seen in action.

There is virtue in Dravid opening the innings. Your best man should have the maximum overs to himself. Dravid's methodical play also contrasts with the dash of a Sehwag or a Sachin Tendulkar at the other end. Bowlers at all times are forced to adjust their line and length which is the prime objective of all batting teams.

Adam Gilchrist and Simon Katich, Gordon Greenidge and Desmond Haynes - the examples are aplenty out there. If one batsman occupies one end and scores a 100, you could be sure that at least 150 runs are being scored at the other end. It's not rocket science.

Yuvraj played a top hand. Such innings are not played everyday, least of all on a wicket which demands caution and scorns free spirits. The pity is it could have ended early when an under-edge from his blade went close to the stumps. Raina too could have been out stumped or run-out. It may have been destiny's way to lavish us with a batting feast we all had missed so far.

It certainly was not a 294-run kind of wicket. Most certainly not where the quickest hundred against England could have been scored. Or the best fifth wicket stand produced. England would need to explain why they are still ignoring Gareth Batty or why 14 wides were gifted on a slow wicket.

In Goa, they had another reason to hide behind the absence of Kevin Pieterson, their best in-form batsman of the series.

Half of England's top order was back in the hut by the 21st over. Whereas England had shown a singular lack of appreciation for conditions, India lost no time in taking the pace further off their deliveries.

Thus, Pathan claimed all his wickets through "left-arm spinners" and the sight of Andrew Flintoff holding his head in half-shame and half-dejection, after he was held in the deep, was not the kind you would see often on a cricket field. This is the second time in two matches when Freddie has been foxed by the portly Romesh Powar. The roundish bowler with red glasses and a carefree spirit looks a character to me.

Another sight was even more demoralising. Dhoni missed a shot and keeper Geraint Jones threw down the stumps. The batsmen promptly ran a single and seeing Jones still on his haunches, they scampered back for another single - or two leg-byes with the ball very much around the three stumps! The game's daddies will also debate how best to describe the six which Dhoni converted out of a yorker. It was madness at high noon.

I can sense that the hopes of India are rising. They would now have their sights firmly set on the Champions Trophy and, subsequently, on the biggest stage of World Cup in the Caribbean next year.

The Rainas of today will be 12 months more experienced by the next World Cup. They are certainly the form team at the moment. But World Cup is still too far. A lot of things can happen in the intervening period.

India still are the side to watch.