With a 1-0 lead from the first leg, Benzema eased any nerves for Madrid when he swept home in the first half following a mistake by Atalanta goalkeeper Marco Sportiello.

Real Madrid booked their place in the Champions League quarter-finals after a 3-1 win over Atalanta on Tuesday thanks to goals from Karim Benzema, Sergio Ramos and Marco Asensio. (More Football News)

With a 1-0 lead from the first leg, Benzema eased any nerves for Madrid when he swept home in the first half following a mistake by Atalanta goalkeeper Marco Sportiello.

Madrid were awarded a penalty after the break when Vinicius Junior was clumsily fouled by Rafael Toloi and Ramos emphatically buried the resulting spot-kick.

Atalanta pulled a late goal back with a free-kick from Luis Muriel, but Asensio ensured there was no drama with a goal on the counterattack.

4 - Since his first season in 2018/19, Vinícius Júnior  has won four penalties in all competitions, more than any other Real Madrid player since then. Unstoppable. pic.twitter.com/Kl1jrGSivv

Madrid made a tentative start and Atalanta went close early on when Muriel cut the ball back for Robin Gosens, who could only manage a tame shot straight at Thibaut Courtois.

Los Blancos eventually found their rhythm midway through the half when the lively Vinicius combined with Benzema inside the box, but the Brazilian saw his goal-bound effort blocked.

Zinedine Zidane's side took the lead after a weak clearance by Sportiello went straight to Luka Modric and he fed Benzema, who finished clinically.

Vinicius almost added a second in spectacular fashion, shooting wide with just Sportiello to beat after a dazzling run.

Ramos left Atalanta with a mountain to climb when he converted from the spot, Sportiello unable to keep it out despite getting a hand to the ball.

Benzema headed against the post and Courtois twice saved from Duvan Zapata before Atalanta pulled one back – Muriel curling a superb free-kick into the top-right corner with seven minutes left.

Madrid finished the game with a flourish and a minute later Asensio punished the Serie A outfit on the counterattack, beating Sportiello at his near post.

What does it mean? Madrid show their class

Before this clash Atalanta were on the longest current run of away victories of any team in the Champions League, having won each of their previous five games on the road in the competition and conceding just three goals.

But Madrid's Champions League pedigree came to the fore at the Alfredo Di Stefano, as they made it 12 victories in their 13 games against Italian opposition in the competition.

In an open game Madrid had 12 shots, six on target, and although Atalanta managed 13, with five accurate, it was Zidane's men who were the more clinical. 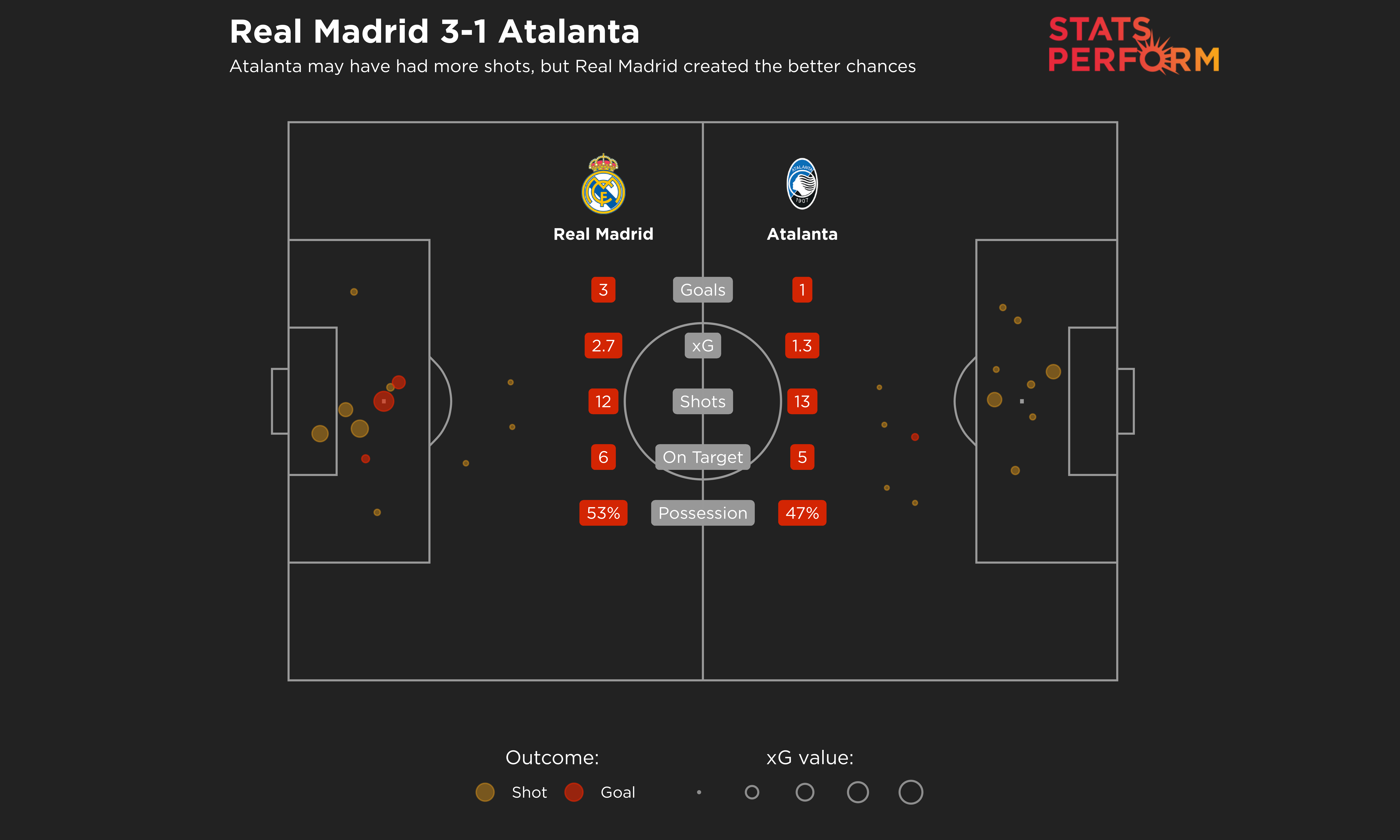 Benzema (21) has scored at least 15 more goals than any other Real Madrid player in all competitions this season (Casemiro, six), with his opener his 70th Champions League goal – the fifth most of any player in the competition.

Only Raul (33), Cristiano Ronaldo (35) and Lionel Messi (36) have scored against a wider variety of opponents in the Champions League than Benzema (32), who also laid on a couple of key passes (a joint-high for Madrid) in a strong individual showing.

A night of toil for Toloi

Atalanta needed a big performance from their captain, but the defender endured an arduous outing against Madrid's attackers, with his trip on Vinicius to give the home side a penalty proving a key moment in settling the outcome of the game.

Toloi made more tackles (five) than any of his team-mates and won 81.8 percent of his 11 duels – the best among Atalanta players with more than three – but on this occasion the stats did not tell the whole story, as he was substituted shortly after conceding the penalty.

- Real Madrid have progressed to their 36th quarter-final in the European Cup/Champions League – at least six more times than any other side (Bayern Munich – 30).

- Zinedine Zidane has won 30 of 49 matches in the Champions League as Madrid boss – only Jupp Heynckes (42) and Pep Guardiola (48) reached 30 victories in fewer matches than the Frenchman.

- Only Barcelona (28 wins v English teams) have beaten sides from a particular country more often in the Champions League than Madrid against Italian opposition, with this their 26th victory against said teams.

- Only Roberto Carlos (16) has scored more Champions League goals than Sergio Ramos (15) among all defenders in the competition's history.

- Toni Kroos made his 100th Champions League start in this game, becoming just the second German outfield player to reach a century of starts in the competition, after Philipp Lahm (110).

Madrid are back in LaLiga action on Saturday with a trip to Celta Vigo while Atalanta head to Hellas Verona on Sunday.