With his "America is not your enemy" interview aimed at the Muslim world, Obama has shown his seriousness and resolve in undoing the Bush administration's legacy in West Asia and rebuilding America's image in the Arab world 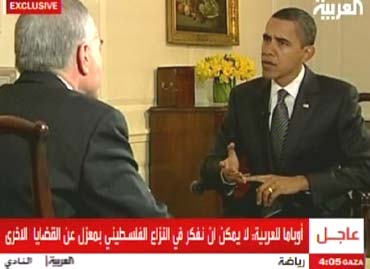 Barack Hussein Obama chose his first media interview as President of the United States carefully. It was not given to one of the mainstream Western media channels like CNN or BBC but to al Arabiya, an Arab language media broadcaster known for its objective and seasoned analysis. The Obama interview broadcast on January 26, 2009 across West Asia shot up al-Arabiya’s viewership rating in the Arab world and for the first time overtook the more popular channel, al-Jazeera’s top viewership spot. This by itself shows how much West Asians are looking forward to Obama for a change in US policy towards the region. [Transcript. Video: Part I, Part II]

The interview also indicates the new US President’s seriousness and resolve in undoing the Bush administration’s legacy in West Asia as much as it was about rebuilding America’s image in the Arab world. As a start, the interview reflects diplomacy at its best. Without stating the US position on the recent Israel military action in Gaza which killed nearly 1, 500 Palestinian civilians within a span of three weeks, Obama managed to reach out and be heard in the Arab world in a way unprecedented by any other President before him.

This approach also questions earlier conceptual treatment of the relationship between the West and the Muslim world articulated by some of the most respected Western intellectuals since the end of the cold war.

No Longer "Us versus them"?

The West’s policy on Islam and West Asia has for long been clubbed under the "Us versus them" discourse set forth by the famous essay of Samuel Huntington in Foreign Affairs in the summer of 1993 titled "The Clash of Civilizations?." In this easy, Huntington argued that "the fault lines between civilizations are replacing the political and ideological boundaries of the Cold War as the flash points for crisis and bloodshed". He further asserted that the dominating source of conflict will be based on ‘civilization’ due to differences in history, language, tradition and religion warning that the centuries old military confrontation between the West and Islam will become more virulent with Arabs resentful of the West’s dominant military presence in the Persian Gulf after the Gulf war. Huntington argued that the West’s dependency on West Asian oil will however make it imperative for an intense engagement between the two civilizations complicated by the fact the any such interaction is bound to result in a clash of civilizations. "This is no less than a clash of civilizations-the perhaps irrational but surely historic reaction of an ancient rival against our Judeo-Christian heritage, our secular present, and the worldwide expansion of both". Significantly, the Bush Administration’s war in Iraq since 2003 is viewed by many in West Asia as an affront on the Muslim identity and falls squarely within the "Clash of Civilizations" paradigm. As a result, according to the Pew Global Attitudes Project survey on the Bush Years-2001-2008, public opinion in West Asia is highly unfavourable towards the US.

President Obama, it appears, wants to change all that during the first few years of his administration. During his two years Presidential election campaign, he had often stated that if elected President, he will work towards changing America’s image in West Asia and negate the clash of civilization thesis. His interview on al Arabiya can be viewed as an effort in this direction. Obama stated that instead of looking at specific issues like the Israel-Palestinian issue which he wanted his new Middle East (West Asia) envoy George Mitchell to handle, he will view the region as a whole necessarily including together the Israel-Palestinian issue, Syria, Iran, Iraq, Lebanon, Afghanistan, and Pakistan. Consequently, the US will initiate a new partnership with the Arab and larger Muslim world based on mutual respect and interest. While asserting that Israel will continue to be a strong ally of the US, Obama stated that a Palestinian state is possible wherein the future generations should feel safer.

Obama’s greatest counter to the "Clash of Civilizations" thesis occurred when he stated in the interview that his job as President will be to communicate the fact that the US has a stake in the "well-being of the Muslim world"; that he had himself lived in many Muslims countries like Indonesia; that some of his own family members are Muslims. It is interesting to hear him say that unlike the track record of the clash discourse, he will communicate to the "American people that the Muslim world is filled with extraordinary people who simply want to live their lives and see their children live better lives.". This human aspect, he argued, is not very dissimilar to what Westerners also desire of their own lives. This is in sharp contrast to Huntington’s argument that " the people of different civilizations have different views on the relations between God and man, the individual and the group, the citizen and the state, parents and children, husband and wife, as well as differing views of the relative importance of rights and responsibilities, liberty and authority, equality and hierarchy". These differences, Huntington argued, will get even sharper due to growing interactions between different civilizations in an era of globalization resulting in devastating conflict. In contrast, Obama wants to utilize globalization’s benefits like the internet and the international media to decrease these so-called civilization differences.

Will he be successful in his effort? Perhaps it is too soon to tell. Though the project of "reaching out" is laudable and much needed, there are certain obstacles on the path.

First, Obama’s holistic approach towards West Asia clubbing all Muslim nations under one umbrella can release negative feelers. One perhaps cannot view Iran, Pakistan and Afghanistan in the same light or Iran and Iraq for that matter. The divisions between Sunnis and Shiites must also be kept in mind. Pakistan will also refuse to be a part of the US’s Middle East policy primarily because of its unwillingness to be clubbed as a West Asian state when geographically, it falls under the South Asian region.

Second, the Israeli-Palestinian peace process is in a bad state given the lack of authentic mediators; Egypt and Turkey have lost their credibility as reliable "third party" mediators in the aftermath of the recent Israeli military offensive in Gaza. Though the choice of George Mitchell by Obama as his West Asian (Middle East) envoy is good, the political stand of Hamas regarding Israel’s status could also come in the way of a peace process. While Hamas is willing to accept the "two state" solution based on the liberation of the West Bank and Gaza Strip up to the borders of 1967 with East Jerusalem as its capital, it is adamant in its non-recognition of Israel as an independent state. This could create serious opposition from the Israeli side in the negotiations.

Third, Obama promised to withdraw US troops from Iraq based on a 16 months "withdrawal" time table offered by him during his election campaign. Interestingly, many in the US and the Arab world believe him to follow up on that promise. This promise, however, already seems to be faltering. General Ray Odierno, the top commander of US troops in Iraq is requesting for a longer time frame for troop withdrawal stating that the "surge strategy" in Iraq has managed to stabilize the ground situation. Obama may be hard pressed to follow the military’s advice for a slower withdrawal which can end up alienating the Arab world and his own anti-Iraq war voter base at home.

Fourth, Obama’s plan for "troop surge" in Afghanistan could face resistance from the US military already overstretched in Iraq. And instead of alienating Afghan President Hamid Karzai, he needs to get the later on board to act more responsibly in rooting out terror elements in the country with the help of the international forces. Pakistan’s cooperation in Afghanistan and its own tribal areas is also vital. The Pakistan government must not be seen as too weak by its own people on the face of US air strikes in its tribal areas which will only delegitimise the democratic government and bring the army back to the centre of Pakistani politics.

In conclusion, it is only fair to argue that Obama might appear to waver in some of his campaign promises based perhaps on the political exigencies of the situation. Throughout history, men and women in positions of power have paused for a while before going headlong to fulfil their stated political objectives. And as the historian Isaiah Berlin wisely indicates in his essay "On Political Judgment", "What is it to have good judgment in politics? What is it to be politically wise or gifted, to be a political genius, or even to be no more than politically competent, to know how to get things done?...Obviously what matters is to understand a particular situation in its full uniqueness, the particular men and events and dangers, the particular hopes and fears which are actively at work in a particular place at a particular time…".

It is by the above measure that Obama’s recent gesture to the Muslim world is perhaps a thoughtful and much needed step if one is to seriously counter extremist groups selling radical ideologies of hate, be it in Asia, Europe or the Americas, by the click of a mouse.

Dr. Namrata Goswami is an Associate Fellow at the Institute for Defence Studies and Analyses (IDSA). The views expressed here are that of the author and not necessarily that of IDSA.