Raina Does A Star Turn

At 92-5 in their quest of 227, India looked set to return England the favour by emulating their Kotla display. But the 19-year-old's unbeaten 81 in the company of Dhoni (38) turned the game around for a four-wicket victory and 2-0 lead. 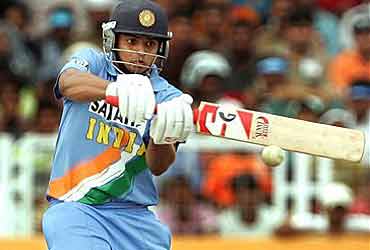 India found a new match winner in young Suresh Raina who slammed an unbeaten 81 after another top order batting collapse to steer India to a thrilling four-wicket victory over England in the second one-dayer today.

Chasing a target of 227 for victory, India were precariously placed at 92 for 5 when the 19-year-old left-hander turned the game on its head with his responsible knock on a turning track at the Nahar Singh Stadium.

Raina, who showed maturity beyond his years, found an able ally in Mahendra Singh Dhoni (38) as the duo put on a vital 118 runs for the sixth wicket to give India a 2-0 lead in the seven-match series.

Irfan Pathan hit James Anderson for a boundary to bring about a memorable Indian victory, achieved with one full over to spare.

The win, which brought the capacity 25,000 crowd on its feet, was India's 14th win on the trot while chasing which equalled the previous record of the West Indies achieved between 1984 and '86.

Raina cracked eight fours and a six in his 89-ball knock while Dhoni hit two fours in his 55-ball effort as India overhauled England's total of 226 all out in 49.5 overs comfortably in the end.

Declared man-of-the-match, Raina justified the faith shown in him by the selectors after having failed to build on his starts in his earlier 13 one-day outings. His earlier highest one-day score was 39.

The teams now move to Goa for the third match of the series to be played on April 3.

Earlier, India made good use of their slow bowling options to restrict England to a modest total, founded on a fine knock of 71 from Kevin Pietersen and a 61 by opener Andrew Strauss.

Ramesh Powar, who came into the team in place of R P Singh, was the pick of the Indian bowlers with 3 for 34 while paceman S Sreesanth was the other successful bowler with 3 for 40.

The highlight of the England innings was the knock by Pietersen who did not refrain from employing the sweep shot although he curbed his attacking instincts at the start.

He also used the wristy flicks more against the spinners, wise from experience in the first one-dayer in which five English batsmen were dismissed playing the sweep shot.

Pietersen's 50 contained only three fours but immediately after the half century, he swung Harbhajan Singh (1-43) over midwicket for a huge six.

The hard-hitting batsman was in his elements when he reverse swept Yuvraj Singh (1-39) to the third man fence. He then lofted the left arm spinner over the long off boundary.

That six also brought up Pietersen's career 1000 runs in his 21st innings, equalling Viv Richards' world record for the fastest to get to the milestone.

But the swashbuckling batsmen was out to a tame dismissal, spooning a simple catch to Rahul Dravid at mid-wicket off the very next ball.

The Indian top order once again failed to deliver and wasted a solid start by Virender Sehwag and Gautam Gambhir who put on 61 runs for the first wicket.

Sehwag seemed to return to form as he played some delightful shots. The slow paced wicket suited his style and the batsman showed his top form with a punch to the point boundary off Andrew Flintoff who had won the toss and elected to bat.

The Delhi batsman, who has not scored a century in his last 25 innings, then played a paddle sweep to Ian Blackwell only to see the ball roll on to his stumps behind his legs.

Gambhir, who too timed the ball well while adding 61 with Sehwag, was too late to react to a shortpitched stuff from James Anderson and top edged for a return catch.

Dravid and Mohammad Kaif then fell while trying to make the most of the third set of power play which Flintoff delayed by four overs.

The urgency was understandable with the asking rate going above five but the Indian captain committed a hara-kiri.

Dravid tried to steal a single after wicketkeeper Geraint Jones's throw had beaten the stumps, but Paul Collingwood swooped down to throw the stumps down at the batsman's end.

Kaif played all over an incoming delivery to be adjudged leg before. It was the batsman's third duck in four innings.

Yuvraj, in the meantime, had struck two fours each off Anderson and Kabir Ali at the other end. But the first ball after the power play, he dragged an innocuous delivery from Blackwell on to his stumps.

The left-hander, who was part of the Ranji Trophy winning Uttar Pradesh team this season, treated the visiting bowlers with disdain. He effortlessly lifted Flintoff, England's best bowler on tour, to the mid-wicket boundary and then showed his growing confidence with a scoop-sweep off Collingwood.

Raina reached his first ODI fifty with a single off the same bowler from 69 balls before planting Blackwell into the long stands in the next over.

The partnership was broken when Flintoff induced an inside edge from Dhoni on to his stumps.

Earlier, England paid the price for some reckless batting. Strauss and Flintoff (5) were both guilty of throwing away their wickets, the former after being well set and the latter before he had got his eye in.

Strauss and Matt Prior gave England a cautious but solid start, adding 66 runs for the opening stand before the latter was adjudged leg before to Harbhajan.

Pietersen then added 64 runs with Strauss for the third wicket before the latter stepped out to Powar and was beaten and bowled. The left hander faced 85 balls for his 61 that included six fours.

Flintoff paid the price for coming down the wicket and was completely beaten by the turn to be stumped. That gave Powar, playing in his fifth match, his career best figures of 10-0-34-3.

The Irony Is Complete