Rahul Gandhi that said during the note ban exercise of 2016, Modi made hundreds of thousands of labourers, women and small businessmen stand in serpentine queues outside banks. 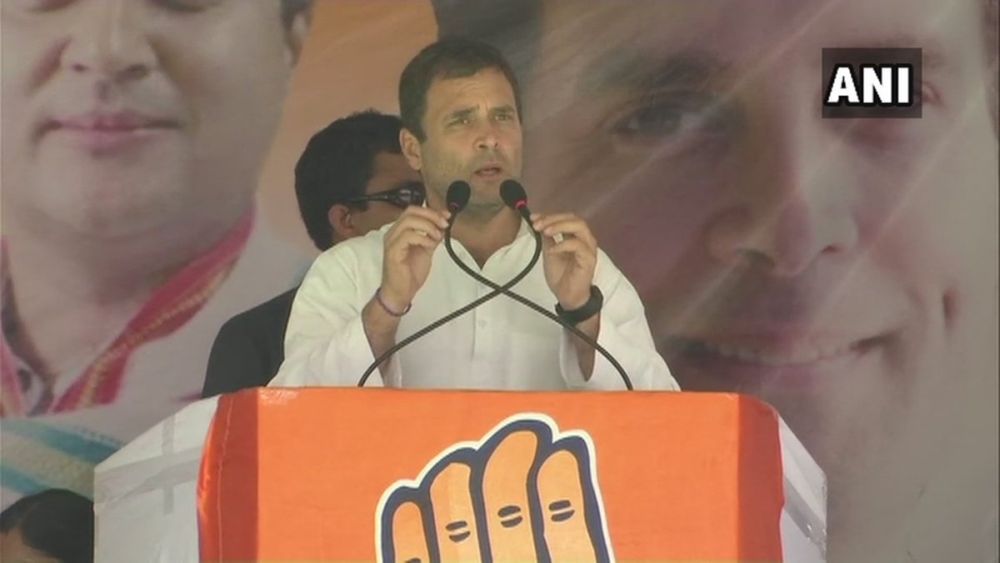 Congress President Rahul Gandhi on Friday attacked Prime Minister Narendra Modi over demonetisation, calling it the "biggest scam" in the country, and attacked the BJP government in Madhya Pradesh over corruption and unemployment.

Addressing an election rally in Sagar district of the state, Gandhi that said during the note ban exercise of 2016, Modi made hundreds of thousands of labourers, women and small businessmen stand in serpentine queues outside banks.

"Did you see any black money hoarders like Nirav Modi or Mehul Choksi queuing up?" asked Gandhi. "Through the note ban, Modi snatched the hard earned money of the poor and put them in his cronies' pockets.

"In the last two years, unemployment has doubled and suicide rate among the youth has increased by 2,000 per cent.

"China creates 50,000 jobs per day, whereas, despite 'Start Up India' and 'Make in India' schemes, the Indian government creates only 450 jobs in a day," the Congress leader said.

Gandhi did not spare Chouhan either.

"Entire Madhya Pradesh knows the role of Shivraj Chouhan and his family in the Vyapam scam," and added that over 100,000 government posts in the state were lying vacant while schools and hospitals were privatized and making them inaccessible to the poor.

There are 230 seats in Madhya Pradesh, where the saffron party has been in power for three consecutive terms and elections are due on November 28. The Bharatiya Janata Party (BJP) released their list on Friday, with the current Chief Minister Shivraj Singh Chouhan contesting the election from his home constituency, Budhni.

The names for 177 candidates for Madhya Pradesh assembly elections were announced following a marathon meeting of the party's Central Election Committee late on Thursday chaired by BJP chief Amit Shah and attended by Prime Minister Narendra Modiamong others.