While the recent shocking incidents in Melbourne have undeniable racist undercurrents and Australia needs to get its act together, let's not go overboard by calling all Australians racist while forgetting what the likes of MNS dish out to 'Biharis' i 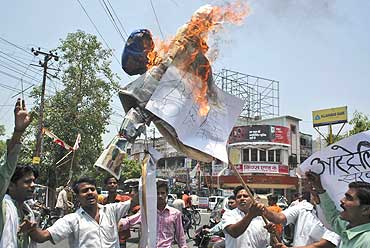 The recent attacks on Indian students in Victoria, especially Melbourne, could easily be seen as "teenage violence". But it is undeniable that there are racist undercurrents in these shocking cases of violence.

No one else is more to blame than the Victorian government for ignoring repeated requests over the months from the Indian community to shore up security in the public transport systems especially the late night trams and trains.

For the Victoria Police to claim that Indian students are ‘soft targets’, inviting hostility from teenaged white Australians due to their overt brandishing of their iPods and laptops, is a skewed argument to say the least.

Not that it matters, but for the record, none of the attacked Indian students carried their iPods. Nor were brandishing their laptops in public.

That the violence will come to the fore at this juncture is not startling. Melbourne’s poorer western suburbs like Sunshine and St. Albans have witnessed a rise in crime and teenage violence over the months since the financial recession hit Australia late last year.

Indian grocery stores have been attacked in Sunshine, and racial abuses are regularly hurled at Indians in streets and the public transport system in the western suburbs by white Australian youths aged between 14 and 18 years.

Unlike the Chinese students who move in groups, Indian students working in KFCs and McDonald's tend to return alone late at night to rental apartments in these areas, and hence easily fall prey to young miscreants high on drugs and alcohol.

Radio jockeys in Melbourne have recently aired ill informed programmes creating the perception that Asians, especially Indians, are crowding the suburbs and have taken over jobs otherwise meant for Australians.

Significantly, Victoria’s education sector is its highest export earner with a turnover of Aus $ 4.5 billion to the state economy in 2008 alone. Between 2007 and 2008, the total number of international student enrolments in Victoria increased from 132,000 to 161,000 including an additional 19,000 enrolments in vocational education and training courses.

Of the 95 thousand Indian students in Australia, some 47 thousand reside in Victoria alone. This student influx has not only created jobs for Victorians in the education sector but the international student community has significantly filled critical gaps in the labour market and local economy.

While Australia has worked hard to attract overseas students for these very obvious benefits to its education sector and local economy, it has neither prepared the Australian citizen for this huge influx nor has it upgraded its compliance mechanisms to keep up with this growth.

As a result, there has been discernible ‘systemic’ failure on the part of the Australian government to address issues of basic security of international students.

Indian students who took part in the protest rally in Melbourne on May 31, 2009 rightly argued for more security and care from the Australian government. But apart from security, there are other emerging areas of concern in the education sector which are coming to the fore as well.

Higher education sectors in Melbourne like hospitality, teaching etc have been taken over by the private sector which is mostly unregulated by the government. Most of these private institutes attract students from India and China with the promise of world class courses, accommodation and jobs but end up ‘way short’ in reality.

While local Australian students have travel concessions in Melbourne, international students are charged full fares in public transport which are way too expensive for students funding their own education. The private institutes, where international students mostly study, also tend to have a "hands off" policy when it comes to their daily security.

Incredulously, the Victoria Police is advising Asians not to talk loudly in their native language in trains and trams and avoid carrying iPods and laptops. It’s like saying that the victim is at fault and not the perpetrators -- as if it is the Asian student’s fault for provoking anger by not appearing poor.

The Victorian authorities should however realize that if they do not treat the cause now, they could inevitably end up tarnishing the image of a majority of Australians who are tolerant, warm and kind.

It should be noted that Melbourne is the most multicultural city in Australia, known for its inclusive character, artists, cuisines and lifestyles. People from different cultures and religions reside here showcasing a disarming political and social ethos.

Ironically, just a day or two before the attack on Shravan Kumar with a screwdriver, the main streets of Melbourne City like Flinders, Swanston, La Trobe and Elizabeth Streets were vibrant with music from Japan, China, Indonesia, India, Egypt and Australia. The wonderful symphony of musical scores in the heart of the city showcases Melbourne’s multi-cultural character at its best.

A word of caution is however in order here when we discuss racism.

While the protest rally organized by the Federation of Indian Students in Australia (FISA) is the right way to bring about awareness on issues of increasing teenage violence against Indian students in particular and international students in general, it is clearly not right to term all Australians as "racist" as was done by some of the Indians students participating in the rally in Melbourne and by some sections of the Indian print and electronic media.

While shocking, these Melbourne incidents are no different from the what students from Bihar and other north Indian states faced at the hands of  Raj Thackeray’s Maharashtra Navnirman Sena (MNS) as they were appearing for the All India Railway Recruitment Board Examination for the Western Region in Mumbai.

Similar incidences also occurred in Assam in 2003 when Bihari candidates were targeted by Assamese youths as they were appearing for railway exams in Tinsukia, Assam.

Students from the North East India routinely suffer discrimination in the capital New Delhi -- "chinky" is after all  a distinctly racial slur. India, like Australia, does have some of the toughest laws against discrimination, but it clearly has not percolated down to the social level.

The attacks on Indian students in Australia could have resulted in a diplomatic impasse between Australia and India, but the Australian government has perhaps averted such a situation by setting up a new task force chaired by Duncan Lewis, the National Security Advisor to coordinate the government’s response across states to the incidences of violence and ensure they do not recur.

While it is a step in the right direction, one ardently wishes that these policy steps were adopted earlier when the Indian and Chinese communities repeatedly requested the government for more security in public transport.

Australia must ensure that its systems meet up to the challenges of law enforcement in the emerging context of its growing education sector and prevent rather than react to violent incidences.

Dr. Namrata Goswami is a Visiting Research Fellow, Centre for Dialogue, La Trobe University, Melbourne and Associate Fellow, Institute for Defence Studies and Analyses, New Delhi. The views expressed here are that of the author and not that of the institutes.