At top speed, Karthikeyan hit a side barrier on turn eight on the 29th lap, resulting in heavy damage to his car but the Jordan driver walked out safely. Updates 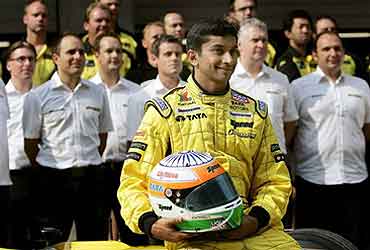 Fernando Alonso notched up his seventh win of the season to give Renault the constructors' title but Narain Karthikeyan's debut Formula One season came to an anti-climactic end today as he crashed out of the season-ending Chinese Grand Prix after being involved in a huge accident.

Speeding in at top speed, Karthikeyan hit a side barrier on turn eight on the 29th lap, resulting in heavy damage to his car but the Jordan driver walked out safely at the Shanghai International Circuit.

The accident could have been even bigger but Karthikeyan was lucky as the immediately passing Jacques Villeneuve's Sauber narrowly missed his Jordan, stranded in the middle of the track.

The 28-year-old Indian had worked his way to a creditable 13th position at that point, taking advantage of an incident involving McLaren's Juan Pablo Montoya that brought the safety car out a few laps earlier.

Montoya, in third place behind Alonso and Kimi Raikkonen, hit a drainage cover on turn 10 and the concrete slab caused enough damage to his car to force him out of the race.

Tiago Monteiro, starting at 19th position, four places behind his Jordan teammate, drove a conservative race and benefited from accidents to Montoya and Karthikeyan to finish an impressive 11th in what was the last race for Team Jordan under its current name.

The British F1 team will be rechristened Jordan Midlands from next year, signifying the takeover by Russian-Canadian business tycoon Alex Schneider. McLaren went out of the constructors' title race with Montotya's retirement although Kimi Raikkonen came home second. 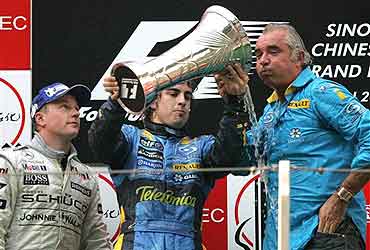 For Renault, it was their first title while competing on their own. But the team were denied a double podium finish with young Giancarlo Fisichella missing out on third place after being punished with a drive through penalty for destructive driving in the pitlane.

After a gruelling 19-races Renault ended the year with 191 points to McLaren's 182.

Ferrari, who had been dominating the sport for long, were forced into third place in the constructors' race, finishing with 100 points.

Ferrari's seven-time world champion Michael Schumacher, blew his chance of ending what has been a miserable season for him on a high, crashing out twice.

The German star, who qualified sixth, was forced to start from the pit lane in the spare car after a collision with Minardi driver Christijan Albers in the warm up lap.

He then inexplicably crashed onto the gravel when he was following the safety car and driving slowly.