How innovative solutions can help solve the challenge of malnutrition

According to recent news, Kandhamal, once infamous for highest number of deliveries at home, is now witnessing a sea change. The district now holds top position in terms of substantial improvement in institutional delivery. Some of the positive activities observed during my fieldwork in Phiringia and Daringbadi blocks of Kandhamal in December 2018 and from interaction with different stakeholders suggest the following.

One such activity is the setting-up of Maa Gruha (Maternity Waiting Home) under National Health Mission (NHM), Odisha where pregnant mothers and an accompanying escort can stay for 7-10 days before and 7-10 days after their delivery. In my visit to one such Maa Gruha operated by Social, Welfare Agency & Training Institute (SWATI), a Non-Government Organisation (NGO), I observed that the mothers were fed a balanced diet based on a detailed food chart for four meals per day - breakfast, lunch, evening snacks and dinner. To add more nutrition to their diet and increase bio-availability of their food, they also have a kitchen garden where green leafy vegetables, green chilli and lemon are organically grown. To ensure healthy mother and healthy baby, the Maa Gruha has a coordinator who with Aanganwadi didi, Accredited Social Health Activist (ASHA) didi and Auxiliary Nurse Midwives (ANMs) facilitates logistics of their stay and travel from home to Maa Gruha to Hospital and back. The menu also changes according to season. For instance, ragi (finger millet), which has higher calcium, iron and other micronutrient when compared to rice, is added in their diet during summer. This also points to a convergence under Odisha Millets Mission (OMM), as SWATI is the facilitating agency under OMM for Raikia, block of Kandhamal. 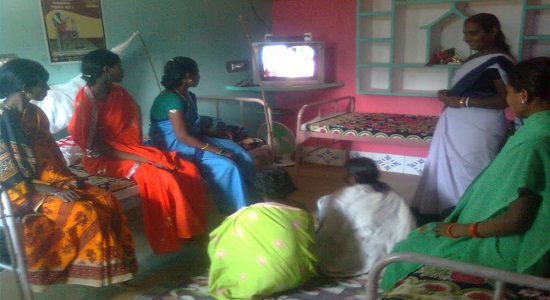 Another activity is the once a month Village Health Nutrition Day (VHND) meeting in the Aanganwadi where the ASHA didi and mothers also attend. Here the discussion is around, proper and regular immunization, breastfeeding, family planning, sanitation, hygiene, balanced diet and various aspects of maternal and child care. From the six Aanganwadi’s visited, one came across only one instance of low birth weight of a child in the case of delivery of twins. My interaction with the stakeholders also suggests that the gravid (the number of pregnancies) has reduced from 10-11 in earlier times to 4-5 in recent times. Further, one also observes from the recent records that there is not much of a difference between gravid and para (the number of live births).

An important activity taken up in the provisioning of both plant and animal based protein in the form of pulses or dalma (dal mixed with other vegetables) and eggs in the Anganwadis for children (of 3-6 years) on a daily basis and eggs and chattua (edible powder mixture of wheat, chickpea, peanut and sugar) to the pregnant and lactating mothers. This is important because my field observations from the households indicates that all households may not grow pulses (plant based protein) or sell it if they grow and have limited access to animal based protein as they may eat eggs and chicken once in a month from the poultry they rear and mutton/pork once or twice a year during some festivals.

In recent years, some of the households have revived cultivation of millets under OMM, which have added to their income and also consumption, as they have been informed of the nutritious value of millets through Maa Gruha, VHND meetings, and OMM awareness campaigns. The Wadi programme facilitated through the National Bank for Agriculture and Rural Development (NABARD) leading to cultivation of horticultural crops like mango, banana and cashews have also added to the household income and nutrition.

Though these good things are happening there are some concerns which need to be addressed like after lactating mothers are discharged from the Maa Gruha, the maintenance on health, nutrition, hygiene and sanitation practiced in this place is not always possible in their homes. So, there is need for follow up with the mothers and other family members to inculcate in them healthy practices.

Unlike in urban areas where the source of food is largely the market, people in rural areas of Kandhamal have multiple sources of cultivated and uncultivated food – their own crop productions, kitchen garden, forests, fruit-bearing trees (which may also be used as vegetables like jackfruit, papaya and mango kernel), Public Distribution System (PDS) and Anganwadi centres indicating that their source of food is diverse. Certain areas of Kandhamal where the production of organic turmeric is happening, which caters to the global market, and other food production like pulses and oilseeds are surplus, but not all household of this district are having sufficient food throughout the year in their platter.

While rural area of Kandhamal may have access to a wide variety of cultivated and uncultivated foods, there are some households that have shortage of food during July-October, a lean season for households in terms of access to food. In fact, 38 of the 50 households surveyed in Phiringia and Daringbadi block pointed out that they do not get sufficient food throughout the year. This indicates that people fail to have Minimum Dietary Diversity (MDD), which is the consumption of four or more food groups from the seven food groups (grains, roots and tubers; legumes and nuts; dairy products-milk, yogurt, cheese; flesh foods-meat, fish, poultry and liver/organ meats; eggs; vitamin-A rich fruits and vegetables; other fruits and vegetables) as per World Health Organization (WHO). This is also the reason why they say that PDS has become an indispensable part of their daily diet.

Learning from field one can come to a conclusion that some positive steps have been taken by focusing on the health of mother and the first 1000 days of life (the time spanning roughly between conception and a child’s second birthday) which is a unique period of opportunity when the foundations of optimum health, growth, and neurodevelopment across the lifespan are established. However, there is scope to take these positive initiatives forward. The pregnant and lactating mothers should be treated well by giving extra care not only by the intervening bodies but also by family members and the community. And since this area is bestowed with many cultivated and uncultivated food sources, advantages of this can be reinforced.