Political Bagpipers And The Bhopal Tragedy

Why was BJP screaming for Anderson's extraction if it did not want to pursue the case as a ruling party? 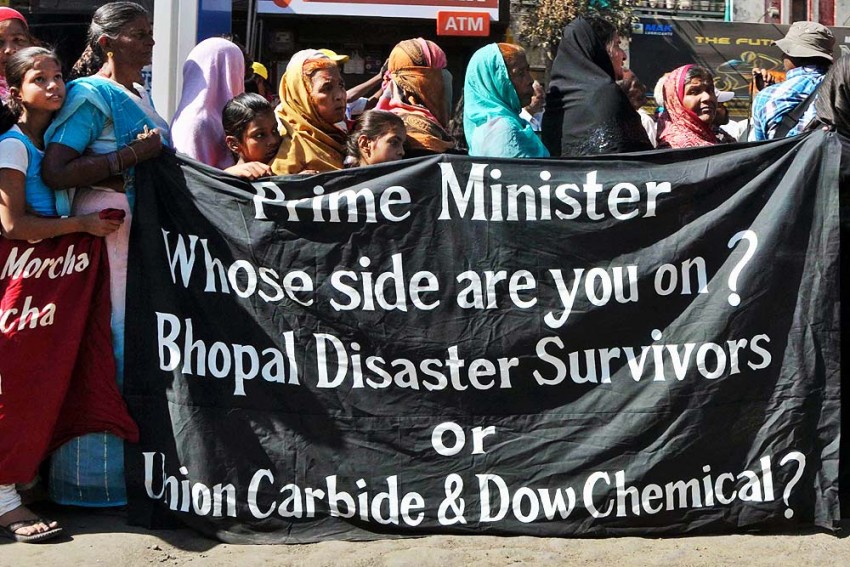 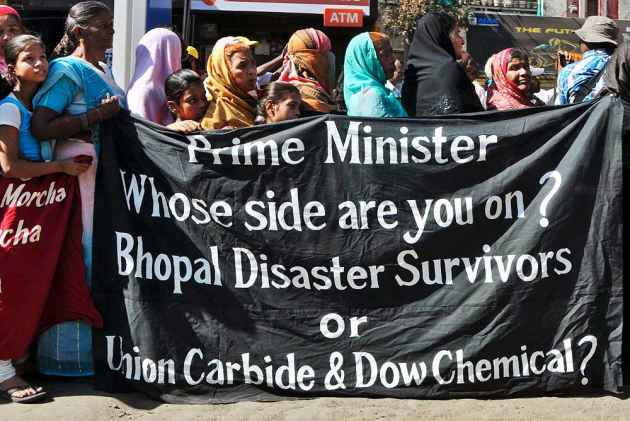 Warren M Anderson, the villain of Bhopal gas tragedy was inching towards death when Narendra Modi was on his much-hyped visit to US a year ago. Anderson died two days before Modi left the US shores. That the Indian Prime Minister remained uninformed about Anderson's demise was a shame. But, to say that even the CIA did not know about it for over a month would be a bigger shame.

Modi's next visit to the US is concluding on the eve of Anderson's first death anniversary and there is no hint of the Madhya Pradesh government reminding him of the criminal liability of Dow Chemicals, US principals of Union Carbide, the corporate house responsible for the Bhopal gas disaster.

Dr Satinath Sarangi who led the Bhopal gas victims' battle for higher compensation, says the prime minister should talk with US President Barak Obama to get Dow Chemicals to appear before the Bhopal court dealing with the compensation case. Dow Chemicals has been ignoring notices issued by the Court.

"We know for sure that during his previous visit Modi met the current CEO of Dow Chemicals, Andrew Liveris. It is shocking he did not learn of Anderson's death. He was so busy drawing fresh investment for India he did not care to utter a word on Bhopal tragedy and its victims," says Sarangi.  Anderson's death doesn't alter the liability scenario or the need to pursue the case for bigger compensation, according to Sarangi.

Anderson, 92, couldn't have been expected to live on forever. But the Indian resolve to bring him to book died long ago. Never mind the boastful claims of successive governments to fight for justice. Bhopal gas victims feel cheated in the government's show of helplessness when Anderson thumb-nosed the Indian law and sovereignty allegedly with generous help from Indian political order. Anderson who arrived in India four days after the disaster was arrested at Bhopal but managed to slip out within hours of arrest.

During her shrill self-exoneration in Lok Sabha on Lalitgate External Affairs Minister Sushma Swaraj had used the name of Anderson and that of Bofors rogue Ottavio Quattrocchi to wriggle out of a tight spot. She blamed former Prime Minister Rajiv Gandhi for Anderson's escape to US. While pricking the raw nerve of the Rajiv Gandhi's survivors she ended up using the agony of Bhopal gas victims to score a political point. Swaraj incidentally represents the neighbouring Vidisha in the Lok Sabha and part of her constituency suffered the consequences of gas tragedy.

Swaraj's colleague in the cabinet Arun Jaitley has for long been on the same side as Anderson. During the UPA rule the BJP was nagging the government to secure Anderson's extradition to India to stand trial. But, as member of the Atal Behari Vajpayee government Jaitley's defence of Anderson sounded more like that of his lawyer than that of India's Law Minister. "It is not that Anderson committed any act that led to the direct result of the leakage of gas and the consequent loss of lives and injuries. There is no evidence that Anderson had knowledge of design defects and violations of safety requirements, and yet he failed to take proper remedial measures," he had said.

Jaitley felt the case for extradition was based on a presumption that Anderson had such knowledge merely by virtue of his position as chairman of the parent company.  Jaitley's note said there was no evidence to show that the parent company exercised control over the day-to-day operations and running of the Bhopal plant. Jaitley, however, said "It will be a matter of policy to go ahead with the extradition request." The lack of conviction reflected in the follow up has been no less disappointing for the gas victims than UPA's alleged complicity in Anderson's escape.

Jaitley also counselled Dow Chemical in his individual capacity as senior advocate in 2006. He then held that Dow could not be held liable for the gas leak tragedy under civil or criminal proceedings.

India's extradition request for Anderson was pending a US decision for more than 20 years. The BJP, which held the UPA responsible for his escape, has been at the helm at the Centre for nearly seven years through this period and could have protested when the US department of justice soft-peddled the case.

On the eve of Modi's maiden visit to Bhopal as Prime Minister on September 10 for the much-hyped opening of the World Hindi Conference five organisations of the calamity survivors had wanted Modi to visit the disaster site and surrounding contaminated area in Bhopal and meet with the representatives of the survivors. They thought he could spare 15 minutes to discuss issues of compensation, criminal justice and the clean-up of toxic waste.

"Those affected by the Bhopal gas tragedy require just 15 minutes Sir" said the placards held by the children waiting for him by the road Modi's convoy took from the airport.
"If Modi does not visit the gas disaster site and meet the survivors during his visit, it would be like a Hindu going to Varanasi and not visiting the Kashi Vishwanath Temple, the survivors had said. An overdose of emotion there, but the call was not entirely devoid of reason. Modi expectedly shrugged off questions on why the gas victims of Bhopal no longer figure on his to do list.

The Bhopal Group for Information and Action (BGIA) says the worst disappointment the gas victims have faced with the Prime Minister is over the abysmal performance of the CBI which comes under the PMO. "Under Modi's charge the CBI has deliberately abandoned the bribery case against Dow Chemical's Indian subsidiary, twice failed to make Dow Chemical appear in the criminal case and has not once argued the case for enhancement of punishment of Indian officials of Union Carbide.

"The state and central governments' connivance with the US culprits needs no proof," says Abdul Jabbar who has also been running a campaign to get justice to the victims for over 30 years "These long years of inaction show that Indian government, regardless of which party heads it, is absolutely helpless before the US," he says. The union government has done precious little in the past 15 months to get justice to Bhopal.

Jabbar says more than its butter-fingered approach in Anderson's escape the government is exposed in shameless mistreatment of the case relating to Indian officials of Union Carbide who have been convicted for negligence. So weak was the case of prosecution that the eight Indian including the former UCIL chairman Keshub Mahindra got away with just a rap on the knuckles. After years of trials they were sentenced in 2010 for just two years in prison. The state government promised to fight for an enhanced sentence but conveniently forgot to do so. The curative petition filed in 2010 to get enhanced compensation for the victims has not been pursued for five years.
Issues involving international relations can't be decided by emotion or dictated by media's impatience. But why was BJP screaming for Anderson's extraction if it did not want to pursue the case as a ruling party?

In just over two months governments, both in the state and at the Centre would ritually mourn the gas victims during anniversary on the disaster on December 3 and will continue to cultivate the perpetrators of the tragedy for more investments for the rest of the year.