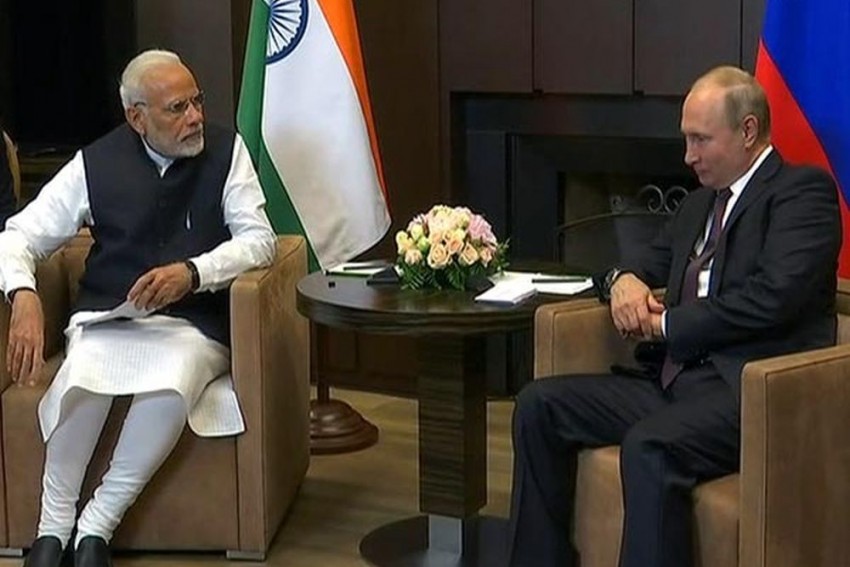 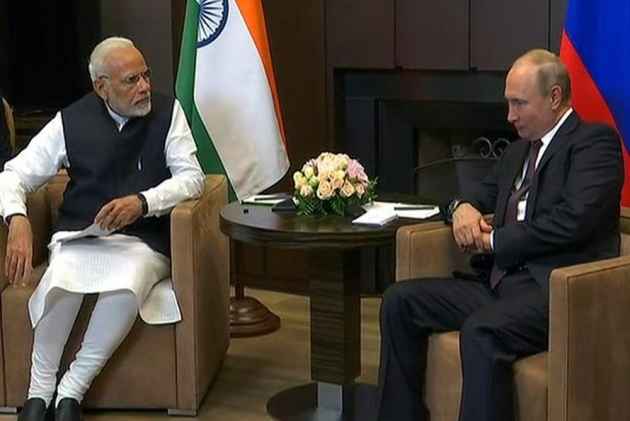 Prime Minister Narendra Modi on Monday said the strategic partnership between India and Russia has now been elevated into a "special privileged strategic partnership" which is a "very big achievement" as he met President Vladimir Putin in the Black Sea coastal city of Sochi for their first informal summit.

"I am grateful to President Putin who invited me for an informal meeting and hence, in the long friendship of ours, this is a new aspect that has been attached to our relationship," Modi said.

Russia played a major role in helping India get a permanent membership in SCO. We are working together on International North-South Transport Corridor (INSTC) and BRICS: PM Narendra Modi in Sochi #Russia pic.twitter.com/WuVbYPkEDy

"You have added a new aspect of informal summit in the bilateral relationship which I think is a great occasion and creates trust," he said.

Modi recalled his first visit to Russia with then Prime Minister Atal Bihari Vajpayee in 2001 and said Putin was the first world leader whom he met after becoming the chief minister of Gujarat.

"In my political career also, Russia and you (Putin) are very significant...As the chief minister of Gujarat, it was my first meeting with a foreign leader. Hence, the beginning of my international relations started from you and Russia," Modi said.

"Since then it has been 18 years, I have got several opportunities to meet you, to deliberate upon issues, and try to take the relations of India and Russia forward," he added.

Modi thanked Russia for playing a major role in helping India get a permanent membership in the Shanghai Cooperation Organisation - an eight nation bloc which aims at military and economic cooperation between the member states. India and Pakistan were admitted last year into the organisation.

"We are working together on International North-South Transport Corridor (INSTC) and BRICS," Modi said.

He also congratulated Putin for becoming the President for the fourth time with overwhelming majority.

"It's my pleasure that I had got an opportunity to talk to you over phone and soon met you to congratulate you personally," he said.

"Starting from the year 2000 when you took office, our relation has been historic...," Modi added.

Welcoming Prime Minister Modi to Bocharev Creek in Sochi ahead of the delegation-level talks, Putin said his visit would give a fresh impetus to bilateral ties.

He said Russia and India maintain a high strategic level of partnership, with close cooperation between the two countries' defense ministries.

"Our defense ministries maintain very close contacts and cooperation. It speaks about a very high strategic level of our partnership," Putin said.

He also hailed joint activities of the two countries in the area of foreign politics, in particular within the United Nations, BRICS (an association of Brazil, Russia, India, China and South Africa) and the SCO.

Putin also said that last year there was a considerable increase in mutual trade and this year for the first several months it was an increase of more than 17 per cent.

Official sources said the aim of the informal summit is to use the friendship and trust between the two countries to create convergence on key global and regional issues.

They said the two leaders will meet for around four to six hours for the "agendaless" talks.

The issues on the table may include economic impact on India and Russia in the wake of the US withdrawal from the Iran nuclear deal, situation in Afghanistan, Syria, threat of terrorism and matters relating to upcoming SCO and BRICS summits.

The sources said possible impact of the US sanctions against Russia under Countering America's Adversaries through Sanctions Act (CAATSA) on Indo-Russia defence cooperation may also figure during the talks between Modi and Putin.

There have been apprehensions that the US decision on Iran deal may adversely impact New Delhi's oil import from the Persian Gulf nation as well as on the Chabahar port project. Iran is the third largest supplier of crude oil to India after Saudi Arabia and Iraq.