With the finance and foreign ministries swapped, the much touted "mother of cabinet reshuffles" accommodates as many as 9 BJP, 2 Shiv Sena and 2 PMK members -- but Mamta Banerjee has to remain out for now. 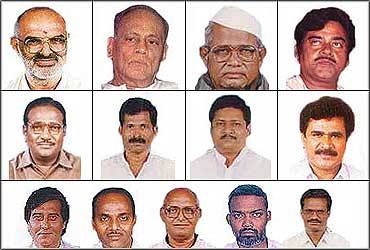 In the end, it was a rather damp squib. Thirteen new faces were brought in (actually, only 12, as the thirteenth is an upgradation of a minister of state to cabinet rank) in the biggest ever expansion of this prime minister's council of ministers.

A total of four new cabinet ministers were sworn in:  Jana  K. Krishnamoorty, Shatrughan Sinha, Sahib Singh Verma from BJP and Balasaheb Vikhe Patil of Shiv Sena who has been upgraded to the cabinet rank from a minister of state.

Twelve portfolios were also changed, the biggest being the swap between Jaswant Singh and Yashwant Sinha. Singh has been appointed as the new Finance Minister and Sinha will move to the Ministry of External Affairs. Significantly, analysts had been questioning the wisdom of the move to shift Jaswant Singh out of the EAM at this critical juncture given that a new foreign secretary Kanwal Sibal took over from Chokila Iyer on her retirement today.

But Yashwant Sinha, given his much-hated-by-the-middle-class budget just had to go, as was clear from at least after the recent election debacle in Delhi and the Goa BJP meet. Perhaps the PM would have tilted towards the minister who's received kudos from all, Arun Shourie, and retaining Jaswant Singh in EAM, but grapevine has it that a peeved Pramod Mahajan pulled the seniority card.

Who else could have been moved to Finance? Perhaps Joshiji, if the Sangh had its way, but there was the stock-markets factor to keep in mind too, which wouldn't exactly have been ecstatic at the revisionist minister doing to the economy what he has been happily doing to history. It remains to be seen whether the EAM's loss is FM's gain.

The original dissenter without a cause, Mamata Banerjee, who had been pitching hard for the Railways portfolio, ended up being kept out of the reshuffle altogether, though Vajpayee was in his "Everything is possible. Let us see" mode about her appointment.

Before the reshuffle, ministers of state Maneka Gandhi, V Dhananjaya Kumar and Munni Lal had been asked to resign. Their resignations were accepted by President K R Narayanan along with that of Cabinet ministers M Venkaiah Naidu, Arun Jaitley and CP Thakur.

In all, 9 new ministers of state were sworn in, essentially as an elaborate balancing act, keeping in mind caste and regional pressures. That the whole exercise took so many meetings, brain-storms and revisions seems rather strange if one takes a brief look at the profiles of the people sworn in today:

The man who replaced Tehelka-tainted Bangaru Laxman as the BJP chief  had made no secret of  his disgruntlement when he wasn't sulking since the question of Venkaiah Naidu replacing him was first aired.

A grudging Law minister now, he is a fourth-generation lawyer who turned an RSS pracharak in 1940 and later joined politics as a state secretary of Bharatiya Jana Sangha way back in 1965.

One of the founder secretaries of BJP when the party was born in 1980 after the failure of the Janta party experiment and became one of the general secretaries in 1983, entrusted with the post of vice-president two years later.

Jana, his profile says, can cook and likes music but rarely sees cinema, though he had some nice dialogues about age and experience in recent days.

Perhaps the most disgruntled BJP MP who had been dropping subtle and not so subtle hints about looking for other options because of not being given a cabinet berth, is finally in as the new Health Minister, replacing C.P. Thakur. The Bihari babu had this to say about himself:

The other Mr. Disgruntled of yore who never shied away from whining in TV studios, the ex-chief minister of Delhi for two years, gets the Labour Ministry.  Born into a farmer's family in the village of Mundka in the capital, the 59-year old Verma joined active politics in 1977 and was elected as councillor of the Delhi Municipal Corporation and re-elected in 1983.

Having been an RSS worker, Verma is a popular figure in rural areas of Delhi and had campaigned vigorously for the BJP which had led to the victory of party vice president late Krishan Lal Sharma in the 1998 Lok Sabha electons from Outer Delhi, among the largest in the country, considered a Congress stronghold till Verma turned it around in BJP's favour

The 70-year-old Shiv Sena leader, serving his seventh term in the Lok Sabha, is the only minister of state who has been upgraded to a cabinet rank in this reshuffle, filling in the portfolio of Heavy Industries vacated by partyman Manohar Joshi's appointment as speaker.

A keen agriculturist, he began his career with Congress as an ordinary member but made steady progress and was elected secretary of the Ahmednagar district unit in 1968 and later made treasurer of Maharashtra Pradesh Congress Committee for a four-year term in 1985.

He left Congress for a few years in 1977 and was president of the breakaway Maharashtra Samajwadi Congress till 1979.

A prominent leader of the backward classes from Tamil Nadu, the PMK member earlier held the portfolio of Minister of State for Health as well as Coal in the Vajpayee Government. However, his party withdrew support to the Government last year only to return to the NDA fold this year. A lawyer by profession, 55-year-old Shanmugham is a second-time member from the Vellore Lok Sabha seat. He is the only minister of state given independent charge in this reshuffle.

A third-time Shiv Sena member of Lok Sabha from Ratnagiri, Maharashtra, 49-year-old Anant Gangaram Geete describes himself as an "agriculturalist, political and social worker". Was Shiv Sena Councillor in the Bombay Municipal Corporation for 17 years before coming to Parliament.First elected to the Lok Sabha in 1996 when he defeated Govind Rao Nikam of Congress. The new minister for state for Finance was born in Mumbai and studied up to matriculation.

A businessman by profession, he was elected to the Lok Sabha for the first time in 1999 from Chengalpattu constituency of Tamil Nadu defeating the AIADMK.

First-time BJP member Sanjay Paswan is a Law graduate who teaches in Patna University. The 40-year-old General Secretary of the party's Bihar state unit, has authored a book on the Scheduled Castes in the state and another on unorganised labour in Patna District. A double MA and LLB, he also has a doctorate.

Fortyeight-year-old Shripad Yesso Naik, is yet another first-time member of the Lower House. A businessman by profession and a graduate in Arts, he is the new minister of state for Civil Aviation who made his legislative debut in 1994 when he was elected to the Goa Assembly and was an MLA till 1999. He was elected to the National Executive of BJP in 1990 having begun his public life as sarpanch of Dubbat village panchayat in 1984 which he held till 1992. He went on to become General Secretary of Goa unit of the BJP in 1988 for a two-year term and President of the party in Goa in 1990.

Born in Peshawar in 1946, entered films in 1969 starting his celluloid career as a villain later graduating to roles of a hero. Among the top ten Most Handsome Men of the Century, voted in an Indiatimes.com poll. Joined the Rajneesh Ashram in Pune as a disciple in 1980s and returned to filmdom a few years later. Became a member of Lok Sabha for the first time in 1998. The undergraduate with schooling from Delhi and Mumbai will be minister of state for Tourism and Culture.

A first-time member of Lok Sabha, 55-year-old Nikhil Kumar Chaudhury won the 1999 elections as BJP's candidate from Katihar against NCP Leader Tariq Anwar, at whose hands he suffered defeat in 1996 and 1998. Born in 1945 in Medinapur in Katihar district of Bihar, he did his BSc from Bhagalpur.

A first time-member, Basangouda R Patil is an agriculturalist who joined the BJP in 1980s. 39-year-old Patil was elected to the Karnataka Assembly in 1994 and emerged victorious in his first attempt at the hustings in the 1999 Parliamentary elections. A Commerce graduate, he is keenly involved in the cooperative movement.

A bitter critic of AIADMK supremo Jayalalitha, Thirunavukarasar floated his own party MGR (AIADMK) and merged with the BJP earlier this year.A first-time Lok Sabha member from Pudukkottai, he was elected to the Tamil Nadu Assembly for six consecutive terms and served as Deputy Speaker of the Assembly during MGR's rule. After MGR's death in 1987 he threw his lot with Jayalalithaa but subsequently fell out with her.