So what explains Pranab Mukherjee's recent visit to Iran? The stakes for India are high, and it cannot be just a bystander. The Teheran visit was clearly a demonstration of a proactive policy 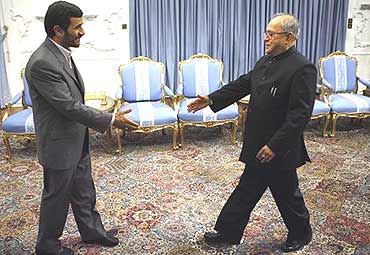 The recent visit of External Affairs Minister (EAM), Pranab Mukherjee, to Teheran is significant for several reasons. Aside from his visit to the SAARC countries to invite their leaders to the Summit to be held in Delhi and to Cebu in the Phillipines for a multilateral meeting, this visit was his first bilateral one as EAM. It is obvious that it did not need the EAM to visit Teheran to discuss oil and gas supplies—the Petroleum Minister was in the region and could have held these discussions; then there were the persons Pranab Mukherjee met—apart from his counterpart, he also met the controversial President, the Chairman of the State Expediency Council, Mahmoud Ahmadinejad and the secretary of the Supreme National Security Council, who has been negotiating Iran's nuclear dossier, Larijani. According to reports emanating from Teheran, the Iranian nuclear issue was a major element of his discussions with the Iranian leaders. There is also a report that Iran has asked India to use her good offices with the US to defuse tensions in the region. Clearly this was no ordinary bilateral visit, but one of some import. It is unlikely that he would not have taken the US into confidence before such an important visit.

For some months now there has been increasing tension in the Gulf region, particularly since the UN Security Council mandated, albeit limited, sanctions on Iran, demanding that it suspend its nuclear enrichment programme. The West, and particularly the United States appear convinced that Iran is developing nuclear weapons. India, too, appears to agree, given, not only her votes in the IAEA, but the fact that Iran has still not clarified to the IAEA what traffic it had with the Pakistani proliferator A.Q.Khan, nor why it had not disclosed all its nuclear activities to the IAEA for almost twenty years. That India does not want another nuclear weapon state in the neighbourhood has been stated officially. What is implicit, is that in the hands of Iran, the possibility of these weapons, the materiel or technology being transferred to non-state actors, with whom Iran does not deny close and supportive ties, increases considerably. This would be one of India's greatest fears, given her experience of terrorism.

On the other hand, the increasing belligerence of the United States, its strengthening of its forces in the Gulf and its additional accusations that Iran is supporting the insurgency in Iraq has led to a steady deterioration of the situation. Though the US has so far maintained that it is not considering military action, the tension, fuelled by Iran's continuous defiance of the UN Security Council and the IAEA, and the immoderate pronouncements of the Iranian President, is increasing. It has been reported that Saudi Arabia has promised to arm the Sunnis in Iraq if the US withdraws its forces as the US is under pressure to do; the rise of Shia military prowess in Lebanon and in Iraq have given Iran a regional standing it did not have before in a predominantly Arab Middle East. The demonstration of its will is evident from the wargames and diplomacy it is carrying out. India would be right in assuming that efforts to reduce the tension are imperative, as neither India nor the world would be able to tolerate a military upheaval in that region. Both the Iranians and the US have rejected an eminently sensible proposal of the IAEA Director General to take "time out"—a breathing space within which the basis for negotiations could be crafted. He had suggested that Iran suspend its enrichment of uranium and the Security Council suspend the sanctions imposed simultaneously. The Europeans, who through France, Germany and the UK had earlier been negotiating with Iran, have taken a tough stand on the sanctions.

India has much at stake in the region in general and in Iran in particular, not least, Iran's potential as a 'stabiliser' in India's immediate neighbourhood—in Pakistan and Afghanistan. This is quite apart from her wish to promote energy cooperation with Iran. She could as easily do that with Saudi Arabia. After all, when the Saudi King visited India last year, he said that he wanted India (and China) to regard Saudi as a reliable long term supplier of her energy needs. Discussions with Russia and India's own discovery of gas fields in the Kaveri Basin could satisfy its thirst for petroleum. However, a military conflagration in Iran will threaten India's economic growth plans, and much may be lost. In this context, Pranab Mukherjee's visit assumes a direct significance to India's present and future well being.

Speaking at a gathering recently, Mukherjee said as much: "..(we) must come to terms with our increasing weight in the international system. Today's India is not a bystander to the actions of other powers." The Teheran visit was clearly a demonstration of a proactive policy.

Arundhati Ghose was India's permanent representative/ ambassador to the United Nations. In 1996, she dramatically vetoed the Comprehensive Test Ban Treaty at the Conference on Disarmament, a step that some say would not have been taken without her. This piece was originally written for Outlook Saptahik.

The Method In The Madness