Instead of counting the number of Bills passed and growth records busted in the ten quarters that the UPA has completed, Chidambaram would do well to guard the fisc like Satan's treasure-chest in the remaining ten. 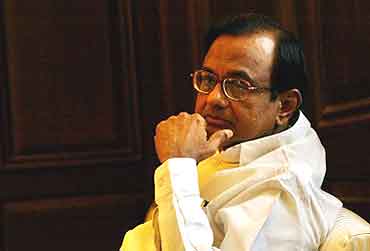 Now, now, have we upset big brother?  US ambassador David Mulford recently griped that there were "signs of pause in the reform process", reflected in the slow rise in foreign direct investment in India, which could have "serious economic costs". Knowing the usual tradition of open mouth kept by American ambassadors, Mulford didn’t simply mean that growth might slow down, which even North Block is well aware of. In effect, he warned that the substantial body of US capital waiting to come to India would remain offshore till "the right conditions materialised", these being privatisation, retail and financial liberalisation, governance reform and of course "unresolved legacy issues involving prior investments in India" (read, Enron).

It is quite possible that the JRD Tata memorial lecture delivered by Finance Minister P Chidambaram two weeks ago on "Economic Policymaking in Coalition Era" abetted the tremors in the heart of Ambassador Mulford. While nobody can accuse Chidambaram of humility, it must be acknowledged that the lecture, otherwise an excellent exercise in self-congratulation and defence, highlights the pitfalls of decision-making and reforms in a coalition government and the general helplessness of North Block in the face of such pressures.

For one, said Chidambaram, "a coalition runs the risk of turning into an extreme form of deliberative democracy. The knowledge that the final decision can be…indefinitely delayed, may encourage the minority to take an aggressive stand and hold up the process." Secondly, there is an acute tendency, especially when facing elections, to postpone "fiscal adjustments, or putting it on reverse gear and putting off structural reforms". Spoken out of bitter experience, these words.

Chidambaram does lay down some general solution, what he calls "our own model of governance even under a coalition government". A common minimum programme is vital, he says, and care should be taken that it remains minimum, "leaving enough space for the actual members of the government to experiment and innovate in areas falling outside the minimum programme, and written in precise language so that there is little room for ambiguity or argument." This concern is understandable since the current NCMP of the UPA is already treated by the Left as a maximum programme—nothing outside it can even be proposed!

The lessons of hindsight of course will work for Chidambaram in the next term, which barring any major mishap, the current constellation might just win. Meanwhile, what happens to the decisions that are already delayed? Or to the draughty decisions already taken (for instance, reservations in education)?  A look at the pending projects list will make it clear why the coalition-government excuse won’t work forever.

Of the 273 projects deadlined March 2006, about half are complete. And of the 742 projects reviewed by the ministry of programme implementation, the cost overrun in 269 was Rs 304 billion. For another 219 of these, nobody knows the completion dates still. Average delays are 14 years for railways, 16 years for power and 21 years for coal. The situation has apparently improved in the last decade—do we want to know more?

CAG of course ahs many more of such gems.  Our national pride, the Golden Quadrilateral project that was to be completed by 2006, had only built 29 per cent of its planned 6,359 km of highways by June 2004, and many of these roads were over-budget and of sub-standard quality, says CAG report 2005. Another 2004 report evaluated the 1996 Accelerated Irrigation Benefit Programme, which speeded up state projects stalled due to funds shortage, spent more than Rs 1500 crore on 172 major and mid-size projects and 3,129 smaller projects in virtually every state in India. More than one-third of the expenditure was found to be "diverted, parked or misutilised". The shocking result: only 28 per cent of the planned irrigation capacity in 21 states had actually been added by 2003 and only 11 per cent of that was actually usable! And then we go and blame our farmers for killing themselves!

The Planning Commission, which, like Oliver Twist, keeps on asking for more, is an excellent repository of many micro-level evaluation studies. Its assessment of major centrally-sponsored schemes (these are the lucrative ones which all states and politicians want, supported by the Left) has consistently found that beneficiaries of small infrastructure projects like housing, tubewells, latrines etc are always chosen on the basis of political affiliations or bribery. And this happens mostly in villages with active panchayats. Clearly when power filters down to the grassroots, corruption too travels alongside!

Instead of counting the number of Bills passed and growth records busted in the ten quarters that the UPA has completed, Chidambaram would do well to guard the fisc like Satan’s treasure-chest in the remaining ten. Party time is over boys; go back to standing on your heads!

The Hole In The Bucket