Panic On The Street

The FM may say that the fundamentals of the Indian economy are still good – and they are – and nothing has changed in the past few days – and it hasn't really, so what spooked the markets and accounts for the biggest intra-day fall ever?
Facebook Twitter Google + Linkedin Whatsapp 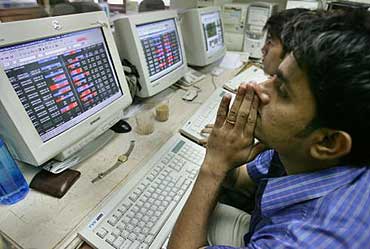 It was yet another of those Mondays. The stock-market went into a free fall - it tumbled over 1,100 points within minutes, and trading was suspended for an hour because the two indices, the Sensex and the Nifty, had hit their respective circuit breakers (10 per cent below the previous closing level). In the end, the markets closed with Sensex at 10481.77 points (i.e.down by 456.84 points) and the Nifty at 3,081.35 (i.e. down by 165.55 points).

Although investors expected a downtrend, no one thought that the bottom would give way the way it did when trading had to be suspended. While analysts and officials tried to analyse the reasons for the slide, my initial reaction was to ponder over the question: why do most crashes happen on Mondays?

Apart from today's crash, three of the Sensex's ten biggest falls have been recorded on a Monday. Another 570 point fall was recorded on the first trading day of the week on April 28, 1992, which happened to be a Tuesday, as Monday had been a holiday. The crash of 565 points on May 17, 2004 is still fresh in investors' memory as "Black Monday" -- which was the last occasion when trading was suspended due to markets hitting the lower circuit.

As usual, the policy makers blamed the rumour-mongers. Most of the regulators – like the RBI, SEBI and the finance ministry – felt that the biggest intra-day fall in BSE’s history was due to speculation that there was a payment crisis at the BSE and the NSE. This, according to them, created an all-round selling pressure among retail investors, day traders, operators, small brokers and speculators. And there they were reassuringly on our TV screens during the one-hour break, with both the FM and the SEBI chairman feeling it necessary to clarify and underline that there was no crisis, that the systems were in place, and that banks had been told to lend to investors who require to cough up more cash.

(Operators and traders have to normally cough up margin money. As the market tumbles down, the requirement increases. So, they have to scurry around for more cash; in case they are unable to do that, they liquidate their existing portfolios which in turn feeds the selling frenzy, creating a panic among other sets of investors as the selling pressure hammers down the prices and the lack of liquidity doesn't leave any buyers in the system. And a chain reaction of sorts sets in that makes the market go into a free-fall.)

While he was at it, the FM also once again blamed the rumour-mongers for the fall of 826 points last Thursday. The text of draft guidelines relating to income tax put up on the website of Central Board of Direct Taxes (CBDT) had helped spread the rumour and led to the belief that by treating the FIIs as traders and not investors, the CBDT was planning to tax them for what investors are exempt from: viz. long term capital gains. The same afternoon, at 4.15 pm, after the markets had closed, the FM had clarified that there was no such move. All FIIs are investors, he had said categorically. The CBDT circular was only a detailed note based on past policies and judgments. There was no changes in the existing position at the ministry level, he had clarified then, and that these proposals had been put up for eliciting views from stakeholders. He repeated the same again today.

Surprisingly, on both days (Thursday and Monday), the clarifications failed to change the sentiments on the street. On Friday, a day after FM’s clarification on the CBDT circular, the Sensex fell by over 450 points. Today, it did recover, but still ended 450 points down at the end of the trading session. This leads to the next set of questions: So if the markets were not spooked by impending tough financial measures from the government, is there more to the current downtrend? Are there some fundamental reasons that are driving down the Indian market? Is it the beginning of a bearish trend?

Most analysts maintained that complicated technical factors were at play in the last three trading sessions, during which the Sensex lost nearly 1,675 points. 'Terrible Thursday' was caused by the global metals meltdown, when most metals crashed on the London Metals Exchange. Metals have seen an upswing for the past several years, and commodities traders expected a sort of a correction. But it came unexpectedly and swept most emerging market indices off their feet.

On Friday, the smaller operators and traders tried to minimise their losses, as well as look for avenues to meet their margin commitments. On Monday, the payment scare turned into a full-fledged crisis. Although the FM and the SEBI chairman denied it, many of the big brokerage houses admitted that investors didn’t have the money to meet the cash margin requirements. Moreover, there was no buying pressure. Normally, some people take a negative call in the futures market - when the market is going up, as it did in the past three years, they bet on a downtrend, and go short (sell) in the futures market. So, when the market does go down, they cover (or square) up their short positions and, in effect, become buyers. That too didn’t happen on Monday as they were not too many shorters in this bullish market - people had become complacent as in the recent months, each significant fall had been followed by an equally or more significant upmove.

But there’s more to this fall than rumours or technicalities. In fact, it happened due to a combination of changed fundamentals and technical factors, aided by market gossip. For example, the consistent hikes in US interest rates and the fall of the dollar have forced FIIs to seek the safety of the US markets. A combination of the twin factors normally force foreign investors to withdraw from emerging markets. This did happen in the past few trading sessions. Last week, FIIs wee net sellers to the tune of Rs 2,500 crore. In addition, most of the emerging markets have witnessed a downtrend in the past few days. Clearly, the FIIs were withdrawing. According to official figures, half of the FIIs’ inflows are through the participatory notes mechanism, which is generally believed to be "hot" money or even that earned from dubious means. This money normally flies away in a jiffy – and probably did in the past few days.

Everyone now agrees that the Indian market was quite "overheated" and needed a correction of anything up to 10 per cent. So, investors were expecting a "mini crash." As a result, when the Sensex collapsed on Thursday, people were ready to book profits and later buy at lower levels – an advice that was given by almost all the experts. This, in a sense, intensified the selling pressure. On top of that, although corporate earnings have been good, they haven’t beaten the expectations. Most companies’ performances in the past quarter were in line with what the analayst expected. Yet again, the feeling was that unless earnings rose unexpectedly, the current valuations were a bit stretched and needed to come down. Which they did.

What’s more important is the feeling that inflows by FIIs into emerging markets, including India, will slow down this year. It may still be a positive, but it won’t register the kind of growth rates we have seen in the past two years. So, there was a realisation that the primary factor that was moving the markets up, may no longer be a force to reckon with. Which is why when other investors saw that the FIIs were selling, they joined in. Today, the herd mentality in the market is led by FIIs, and most investors take their cues from what the foreigners are doing. As they did in the past three trading sessions.

The rumours and the technicalities only added to the changing negative sentiments. But they were not the initiators of the fall, nor were they primarily responsible for it. The FM may say that the fundamentals of the Indian economy are still good – and they are – and nothing has changed in the past few days – and it hasn’t really, but the bitter truth is that investors – whether domestic or foreigners – have become a bit apprehensive and cagey about the markets. And they have enough global reasons to feel this way. And when that happens, no official statements or clarifications can stem the slide.

But then, tomorrow is another day.

What Is Sharad Pawar Trying To Hide?