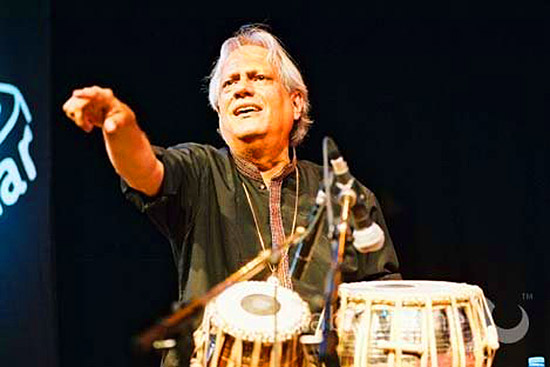 With the demise of Pandit Shankar Ghosh, one of the prominent remaining voices of the Farukhabad Gharana of ?B?aaz falls silent. Born in 1935, he grew into one of the finest tabla players in India and had developed an innovative playing style which regaled audiences for over five decades?.? The Sha?n?kar Ghosh style of table playing? is acclaimed by tabla players and musicians across the world ?— it has rightly earned him the sobriquet of 'Innovative Genius'.

Ghosh's unique style comes from a blend of teachers under whom he trained from his childhood days. His early training was under Pandit Anath Nath Ghosh of Bengal, which was followed by a rigorous training under Ustad Feroze Khan of Punjab Gharana and later under Pandit Sudharshan Adhikari of Lucknow. Later, a large part of his training and his formative stages was under the legendary Pandit Gyan Prakash Ghosh who founded the Calcutta Gharana.

Few people know that Ghosh was also an occasional vocalist and had received training under the tutelage of Prasun Banerjee and was also guided by the legendary sarod maestro Ustad Ali Akbar Khan. He also had a very strong Patiala Gharana influence in his occasional ?singing. He was also a founding member of the faculty at the Ali Akbar Khan College of Music in California.

Apart from being an accomplished accompanist with musical greats, Ghosh was also known globally as a solo performer on the tabla and has held the flag of the Farukhabad G?harana high through his performances and style.

One of the things that people will also remember about him, apart from his music, is the the unique all-drum orchestra that he set up in the late 1970s called Music of the Drums in which he both composed and performed. This was later called the Calcutta Drum Orchestra. The orchestra also has the credit of performing at the closing ceremony at the 1982 Asian Games in New Delhi and toured countries like Japan where it presented the art of the Indian tabla. One of the things that he successfully developed and performed across the world was his table ensemble where a large number of tabla players played together.

Later, Ghosh ?also indulged in fusion and orchestral music and worked with overseas groups like The Grateful Dead and also worked with renowned Jazz musician John Handy?. He also collaborated and played with a number of other international musicians like Greg Ellis, Pete Lockett and John Bergamo.

?Ghosh ?was the recipient of the prestigious Sangeet Natak Academy award for his contribution to Indian classical music in 1999-2000. He also received the ITC Sangeet Research Academy Award and Ustad Hafiz Ali Khan award.

In his later years while his performances reduced, he was known to be one of the greatest teachers and gurus of the tabla and had a huge following of disciples who follow his line and style of music. Unlike most other gurus, he had more than 200 disciples many of whom are accomplished tabla players in their own right.

He will be deeply missed by the table fraternity as well as other musicians who will miss a very accomplished accompanist, a solo player and a composer. He leaves behind a huge number of disciples including his son Bickram Ghosh who is carrying Ghosh's unique style forward.