Home  »  Website  »  Outlook Spotlight  »  Which gemstone should you wear according to date of birth: Vinay Bajrangi

Which gemstone should you wear according to date of birth: Vinay Bajrangi 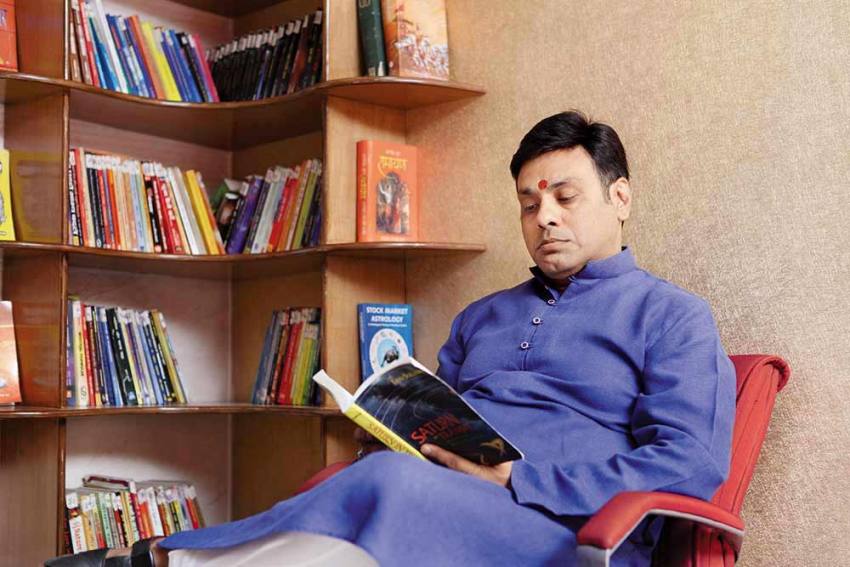 Expecting results too fast too soon & adopting shortcuts in life has become a passion for some & fashion for some. In the same manner, it seems fascinating the people to wear the Gemstones also. Astrologers, as a habit, are suggesting different gems for coming out of the troubled times. The inclination of the natives towards putting one also compels the astrologers to suggest gemstones. To enlighten the common person regarding gemstone therapy, we spoke to Dr. Vinay Bajrangi, one of India's best astrologers, who explained many important things regarding wearing Gemstone according to date of birth, Zodiac Sign & for a particular purpose. His first reaction was that “Gemstones can be the icing on the cake and not the cake itself” therefore, do not expect miracles out of gemstones no matter whatever anyone says or counsels.

Question: Should we wear Gemstone by birth date or name?

DVB – I don’t know how people talk about wearing Gemstone by name. Gemstones are directly related to the planets & planetary position allotted to a person at the time of birth & these are fixed without human’s role. Name is given by us & many a time, we change or even alter the name, so it does not need any further explanation except that my recommendation is to select and wear the Gemstone according to birth date. Once you know the intricacy & basic rules of astrology for gemstones, you will understand why I recommend wearing gemstones according to date of birth & that also, if at all, I feel one should wear any gemstone. In my opinion, if we follow the basic rules of Vedic astrology, not more than five percent of people many need to wear any gemstone. Many talks about wearing gemstones for money and wealth, many talks of gemstones according to date of birth, gemstones as per Zodiac sign, which is the best Gemstone for me & like that. My only contention to explain here is that wearing Gemstone per astrology should be strictly on the basis of planets which I will explain as we talk more about as to which is the best Gemstone, one should wear.

Question: How to select Gemstone according to birth details?

DVB - Birth details mean your horoscope with date, time, and place of birth. Each horoscope has a set of supportive/benefic planets and another set of weak or malefic planets. The purpose of wearing any gemstone is to strengthen the weak planets & your horoscope based on your birth chart/horoscope is a direct indication of the weak planets. There is no thump rule as to which Gemstone will suit one particular ascendant, a moon sign or Rashi. I have also seen many wearing gemstones based on Dasha or period ( Gochar) they are running. Both these techniques of suggesting any gemstones are flawed. It may not give good instead can give reverse results.

Through ascendant, we know what the strong/good planets in a horoscope are. Lord of ascendant, lords of 5th & 9th house are the benefic planets. We have to see which of this Lord is weak, and we suggest Gemstone for the weaker planet. But here, we should know that each planet has the Lordships of two Rashi/signs. For example, Lord of 9th house Saturn can have the Lordship of 8th or 10th house. Here if it has the Lordship of the 8th house, then one cannot and should not wear the Stone for Saturn. This is in spite of the fact that Saturn has a dual Lordship of the 9th house. Coming back to your question, how to select Gemstone based on birth details is simple: identify weak planets, its Lordship from a birth chart & then select the best Gemstone for you.

Question: Why should one wear the gemstones at all?

DVB - I am not at all against a person wearing a gemstone. The fact is that for a long time, immemorial gemstones have fascinated the minds of humans. It is widely believed that they confer status, wealth, and permanent stature to their possessor. The value of gemstones is aptly described in Atharva Vedas. The Puranas have an elaborate description of the significance of these gems on native’s life. Different gems have been attributed to confer vigor, status, sin-cleansing abilities, and strength to the native, along with other attributes. Those practicing the Indian Vedic astrology widely use Gems because of its therapeutic value but what I am against is: to recommend these gems without going into the dos and don’ts. I am against if the astrologers see Gemstones as the only remedy to offer and thrive on selling them off. The same way I also discourage the people who sometimes force upon the astrologer to suggest them some gemstones, but their number is small. One can wear stones provided it is selected on the defined ethics & procedures of Vedic astrology.

Question: When should one wear the Gemstone?

DVB - It is normally seen that Gems are worn as per Dasha/ period or to strengthen those planets that are weak or are worn to achieve a particular goal such as success in career, business success, or getting rid of anger etc or we wear seeing its result on some other natives. Let me clarify that gemstones are not to be put in any of the aforesaid reasons.

Gemstones are worn only in the case when the tricona or the trines (1-5-9) are to be strengthened without simultaneously amplifying the Trik Bhav or the unfavorable houses (6-8-12) as the strengthened planet may be having dual Lordship.

Although this analogy is not that intricate, due to greed sometimes the native tries to strengthen through Gems , even those planets which he should have not, bringing his journey to a grinding halt.

Wear a gemstone as an astrologically refined product and not a commodity showing money-power, or for the beauty. Don’t forget a wrong gemstone can interfere with positive results by suppressing it and hindering an otherwise clam period. I am not putting any strictures for wearing a gemstone but in case of any doubt, take a recommendation from a competent person than wearing the wrong one. A wrong gemstone can have an irreversible impact also.

What are the things to consider before wearing a gemstone?

I am again not putting any strictures for wearing a gemstone, but one should keep in mind that:

Question: Which gemstone should one wear for money, wealth and success?

DVB - I have my reservations in suggesting any gemstone for money, wealth, or success to any person without assessing the strength or weakness of a planet & its Lordship (s). Here I can only say do not be under any passion or fashion or show your money power in selecting any gemstone. Buying Gemstone involves good amount of money & can have effects both ways so better consult any good astrologer , pay a small fee , tell your reason for buying the Gemstone & take specific recommendation as to which is the best Gemstone for you. How to select the right Gemstone for you, I have already explained it above so buy any stone as an astrologically suitable than buying as normal merchandise. If wealth, money or success was to come only from the Gemstones, then those gemstones would be sold priceless & may be the poorer class will never get money, wealth or success.

Question - Can we wear Gemstone according to ascendant?

DVB - Selecting a gemstone according to the ascendant, I think I have already replied. There cannot be any thump rule to wear Gemstone based on ascendant as each ascendant has both good and weak planets; each planet has a dual Lordship of two signs. Identify which planet is weak in your ascendant & go for the Gemstone of that weak planet. I differ when people say no to wear Gemstone for a weak planet & if that is so, it is better not to wear any gemstone.

This was Dr. Vinay Bajrangi , one of the best astrologer in India, who has been revealing some astrology marvels in this series. He has also similar way released a very interesting narration on increasing trend of daily horoscope today . One can read more about him on www.vinaybajrangi.com or call his office on +91 9278665588/9278555588.

NEET 2021 Latest Updates: Exam Can Be Held Twice A Year