Top 7 Books To Read While Lockdown

The second wave of Covid-19 has hit us hard. Most of us are at home, some of us are working from home and some of us are running businesses from home. We can also read all those books we wanted to but never had time. 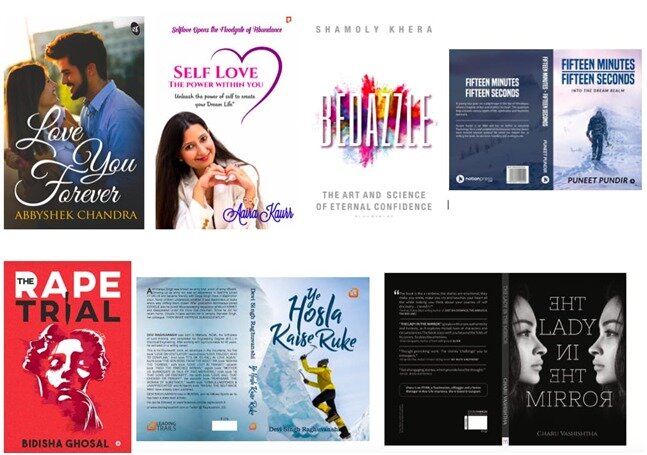 Here are top 7 books that one can read while sitting at home.

1) Love you forever by Abbyshek Chandra

Love You Forever is based on a real-life story of love-betrayal, success-failure, fun-struggle, marriage-separation in the life of an IITian/ISBian entrepreneur-turned-author. Abby is 17 when he first falls in love with Shalini. She loves him too and wants to marry him. But after three years of their relationship, she dumps him brutally one day, leaving him with a torturous set of unanswered questions. He changes and so does his views about women. He does things forbidden. He is happy but finds love again, this time in the form of Myra who he marries. She changes him back to his innocent self but when life throws a curve ball as she herself turns evil. Just when he gets things in control, Shalini makes a comeback. Why did Shalini suddenly dump Abby? Does Abby still love her? Will he dump Myra and their son, Rey for Shalini or will Myra walk away with Rey?

To know more do give a read to the book.

This book is unique in the sense that it makes you aware of a miracle ingredient necessary for your flowering and becoming the best version of yourself, self love. If you don’t love your own self first, you can’t love anyone else, be it a person, a profession or anything else. No matter, how much effort you put in or how good or brilliant you are, you will be disappointed in the end in all your ventures, in spite of your high achievements. Without self love, others will enjoy and exploit your talents, you won’t. This book not only explains the concept of self love, but gives you a systematic framework for imbibing it in your life. In fact, you already have it in you, you just need to turn it on. The book has been divided into three chapters. The first one being “What is love?” followed by the second chapter & What is self love?” and again followed by the third chapter “How to empower with Self Love?”

Bedazzle by Shamoly Khera is about the art and science of eternal confidence. What makes a person confident? What affects a person’s confidence adversely and why is this even important? Where does that confidence come from, despite of a past failure and what can we learn from this? How do animals with lesser thinking capacity step out to hunt, deeply motivated every single day, despite a previous failed attempt?

Bedazzle deconstructs the core aspects of subconscious motivation in all such scenarios and handpicks the triggers to understand confidence at a deeper level so that anyone can use it to their best advantage.

Fifteen Minutes Fifteen seconds by Puneet Pundir follows the journey of a young man named Arya. Arya is middle class, holds an average job but is addicted to alcohol. One positive thing in his life is spiritual practices, just like a lamp in a dark space. Then one day he along with his family goes for a pilgrimage to Badrinath and Kedarnath, in the lap of Himalayas. There life turns Armageddon for Arya after he loses his family.

5) The Rape Trial by Bidisha Ghosal

‘The Rape Trial’ begins with the revelation that, many years ago, Rahul Satyabhagi had indeed raped Avni Rambha. Rahul has long since been acquitted and Avni had left the country for her peace of mind. Now, it looks like he’s about to get away with it again. Rhea, Amruta and Hitaishi are beyond furious. They decide to pull a Larsson on him, kidnap and torture him, and leave him alive to be found.  Using their resources, they tear through other rapists that have gone scot-free. Before they know it, copycat gangs have reared their heads in other parts of the country.

Since Rahul is a ‘somebody’ in society, a special police team led by DC Dixit is put together to investigate his attack. Dixit, however, runs into dead ends because the copycat gangs end up being worthy red herrings. By the time the three girls come under his radar, they have already decided to put a stop to their escapades. Thanks to Rhea’s close connection with Rahul’s family, Dixit closes in on her in particular. Just when she thinks she’s about to get caught, a fourth girl is arrested. Is this girl a new vigilante? Or is she telling the truth that she was only defending herself? More importantly, who cares?

The book is about Abhimanyu Singh who was known as army brat, a son of army officers. Growing up as army kid was an experience in itself. He joins IIT Delhi and becomes friendly with Divya Singh in a badminton court. None of them understand whether it is badminton or looks which is bringing them closer. After graduation, Abhimanyu joins Google. On a mountaineering expedition to Mount Kamet, he disappears. Since he does not return, Divya’s in-laws want her to remarry Ranveer Singh, her colleague. THEN WHAT HAPPENS SUBSEQUENTLY? Do give the book a read to know more.

7) The Lady In The Mirror by Charu Vashishtha

Do you know what you really are? Or has life not tested you yet!

8 stories 8 situations 8 emotions. Lata is quintessential Indian housewife. How come her blissful life got disturbed by all but a gentle sermon? The handsome Piyush had the world at his feet and yet his world was empty! Meera, an IAS officer, was living her dream but why wasn’t she happy? Centuries ago, Ila the -playwright, ound happiness in pursuing her passion but why was this a bane to many? What happens when your subconscious tries to pass on a message? Hurt and pain helped Madhav become a millionaire. How would be come to terms when he realizes that it was not him that was wronged but it was, he who was wrong?

Explore Greed via Manifestation of God, Unspoken words via The Last Confession, Internal Conflict (via The Lost Meera), Self-Belief (via The Mysterious Playwright), Subconscious-self (via Three of Him), Love (via Madhav and Meera), Jealousy (via The Comic’s Tragedy) and Freedom (via Life goes in a circle).

Nikhil Singhal: It Takes A Long Journey To Build A Reputation And Few Steps To Ruin It!