Celebrating 75 Years Of Independence At Chandigarh

Seventy-five years of India’s independence has caused happiness and elation for all Indians living in the country or settled abroad.

Year 2021-22 marks a major milestone in the history of modern India when our nation is reckoned in the world as the largest democracy and emerging as a world power and an economic giant. ‘Azadi Ka Amrit Mahotsav’ an initiative of the Government of India takes back the
entire country to the glorious history of its people, cultural ethos and achievements and also a glimpse of the modern nation that the nation has turned into in 75 years after the independence in 1947.

This Azadi ka Amrit Mahotsav is a dedication towards the people of the country who have not only been instrumental in bringing India thus far in its evolutionary journey but also hold within them the power and potential to take forward the dreams envisioned by its leader – Prime Minister Narendra Modi’s in activating India 2.0, catalysed with the spirit of Atmanirbhar Bharat.

The year-long celebrations showcase progressive India’s socio-cultural, political and economic identity. The journey of “Azadi ka Amrit Mahotsav” began on March 12, 2021 and will continue for 75 weeks leading the nation to the 75th anniversary of Independence and will end post a year on August 15, 2023.

CELEBRATIONS IN THE CITY BEAUTIFUL - CHANDIGARH

The Azadi Ka Amrit Mahotsav celebrations at Chandigarh is a municipal city wide campaign with a focus on participation by the citizens, transforming it into a ‘Janandolan’ (People’s movement), where small changes taken at the community level, will augment up to significant changes at city level and consequently enlarge gains on the national canvas. 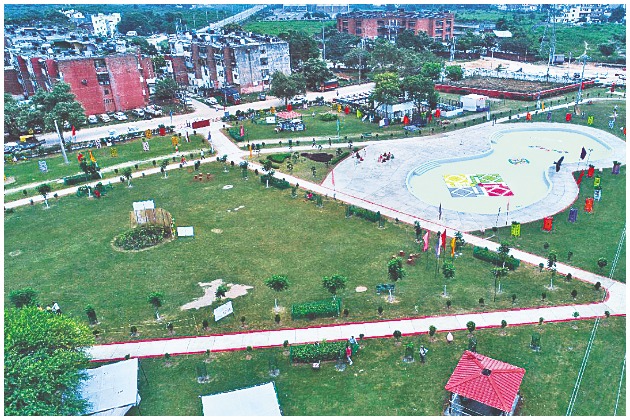 THE MAHOTSAV AT CHANDIGARH

Municipal Corporation Chandigarh organised a week-long urban campaign from September28, 2021 to October 3, 2021, part of an initiative by the Government of India’s Ministry of Housing and Urban Affairs (MoHUA) for showcasing the achievements of the ongoing development activities. 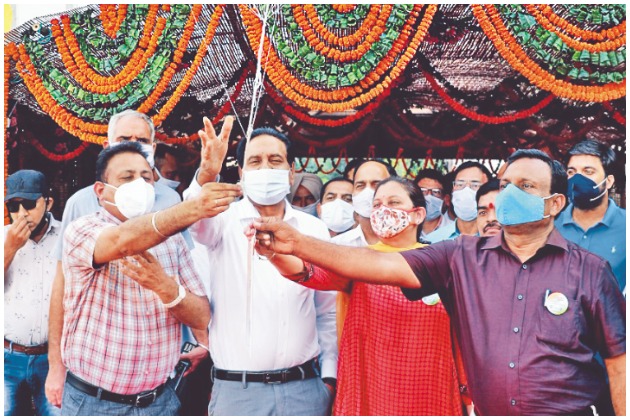 Public Sector Undertakings including banks and corporations came forward with their kind and budgetary support under Corporate Social Responsibility (CSR) to rejoice the spirit and essence of Azadi Ka Amrit Mahotsav thereby promoting JanBhagidari and mass citizen engagement, which will no doubt congruently put forth in curbing the post COVID-19 impacts on the minds of people in having adapted the behaviour in post COVID world.

In the Mahotsav, the programme and activities which were conceived by the Municipal Corporation Chandigarh were led by the Commissioner, Municipal Corporation Chandigarh Anindita Mitra, included; INAUGURATION AND 75 Hours PLACEMAKING Azadi Ka Amrit Mahotsav campaign was inaugurated and opened to the public by Adviser to the Administrator U.T. Chandigarh Dharam Pal on 28th September at the city’s Community Park in New Indira Colony, Manimajra, Sector 13. The inaugural function was also attended by Chandigarh Mayor Ravi Kant Sharma, Home Secretary Chandigarh Administration Nitin Kumar Yadav, Finance Secretary Vijay Namdeo Zade and Commissioner Municipal Corporation Anindita Mitra. The physical transformation involved construction of a public toilet, painting of the water body into an interactive play area for kids, connecting the neighbouring school with the park through a tabletop crossing, repair and painting of planters. To ensure public participation, events like morning Yoga Session for locals, Kabaddi game for men and women, and Drawing competition among school going children, plantation at herbal garden, rassa kassi (Tug of War) among children, officers and councilors, magic show for children, puppet show for small kids, various quizzes, antakshari (musical game) and Camel ride were organized. The implementation witnessed participation of more than 10,000 people from the vicinity. The key aim behind choosing New Indira Colony for the 75 Hours Placemaking Implementation from September 28 to 30, 2021 was to promote urban vivacity to areas on the outskirts of the city which inhabited the marginalized and economically weaker section community. 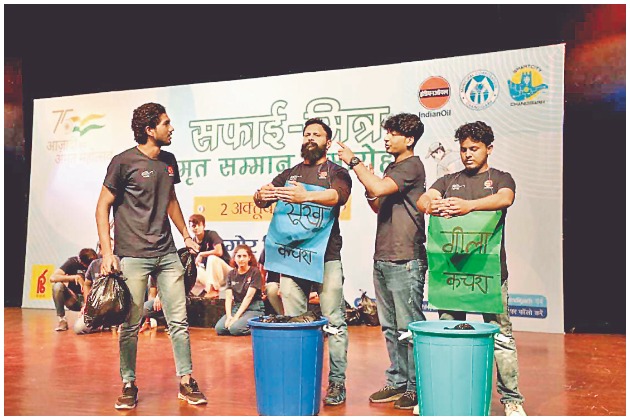 Safai Karamchari Kale Ram was appointed as Brand Ambassador of Swachhta Mission in the city for an awareness campaign. Sensitization of the citizens was done through skits and nukkar nataks on waste segregation at source were organized on September 29. Colour-coded waste collection compostable bags were distributed to citizens at Maloya, Ram Darbar and Maulijagran.

Municipal Corporation Chandigarh in a special maintenance drive during this period revamped 26 public toilets throughout the city which were handed over to Resident Welfare and Market Associations and other operating agencies by Area Councilors in their wards on September 30. A new toilet block in Sector-17 was inaugurated by Mayor Chandigarh. Also, QR code for getting citizen feedback on usage of public toilets in terms of amenities was also affixed.

The Cycle2Work campaign aims at getting people out of their cars and convince them to shift their daily habits in favour of a more sustainable and healthier commute. Leading by example, the officers and employees of Chandigarh Smart City Limited and Municipal Corporation cycled to their workplaces on October 1. Badges were affixed to encourage the employees and a selfie frame was installed in the office premises to create buzz about the concept.

A Wasteto-Art exhibition was organised on October 1, at Sector 17, Plaza inviting the civil society organizations, self-help groups (SHGs), school going students, and the corporate. In the exhibition, Rock Garden, Kala Sagar, Indian Oil Corporation Ltd. NULM women SHGs have displayed various articles and models prepared by them using waste, which has demonstrated – Reuse, Recycle and Reduce strategy of the United Nation’s sustainable development groups (UNSDGs). A special event was conceived to felicitate city-based Waste Entrepreneurs who have demonstrated state of the art models prepared out of waste by the Mayor, Chandigarh. 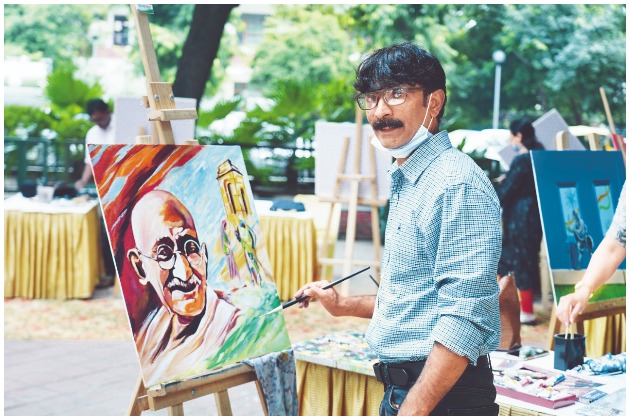 (An artiste during a live exhibition session held at Tagore Theatre)

Integrated Command and Control Center (ICCC) – To empower citizens with knowledge about the ‘Smart’ initiatives being taken up in the city, the Chandigarh’S Smart City limited team demonstrated the ICCC platform with integrated traffic control system, e-challan system, live monitoring by surveillance cameras to the public. A live demonstration on the functioning of ICCC was given to councilors, media representatives, students on October 1, 2021 and a video presentation on ICCC and other initiatives was given to citizens on October 2 and 3 at the Municipal Corporation office and Sector 17 Plaza.

While commemorating the 152nd Birth Anniversary of Mahatma Gandhi and his vision for sanitation, the event was held on October2 and 3. During this event, 5,150 Safaimitras were felicitated. On October 2, Mayor Ravikant Sharma felicitated the Safaimitras and in the closing ceremony, felicitation was done by His Excellency Banwari Lal Purohit, Governor-Punjab and Administrator-Chandigarh. 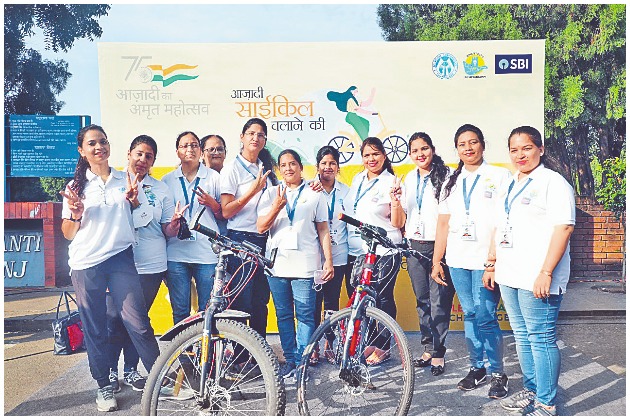 A 7.5-kilometer cycle rally was organized on October 3 to celebrate the 75 glorious years of India’s independence. The rally was flagged off by His Excellency Banwari Lal Purohit, Governor-Punjab and AdministratorChandigarh at Sukhna Lake. The rally witnessed massive participation from the cycling enthusiasts of the city. The rally ended at Shanti Kunj, Sector-16 where ‘Junior Bicycling Champions’ were felicitated by Anindita Mitra, Commissioner – Municipal Corporation Chandigarh cum CEO – Chandigarh Smart City Limited. Azadi Ka Amrit Mahotsav at Chandigarh has witnessed participation of citizens and stakeholders from all age groups – kids, children, adolescent, youth, senior citizens from all sections of society marginalized, weaker sections and mainstreamed as well, which has showcased and demonstrated a phrase ‘Unity In Diversity’, strengthening harmony, peace and unity between dissimilar communities of various origins in metropolis of Chandigarh.

Jasprit Bumrah Happy To Take Any Responsibility For Team India