International Outfits Of Terror Have No Religion

Outfits Of Terror Have No Religion

We thank the political leadership of both countries for using sombre and sensitive language at such a time ... and urge them to go further and rigorously investigate and get to the bottom of such an attack. 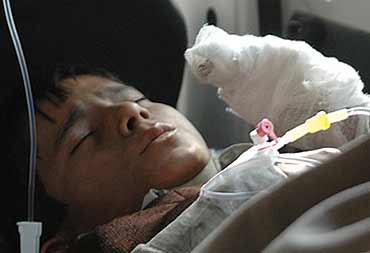 As citizens of India committed strongly committed to peaceful and fruitful relations between India and Pakistan as also unequivocally to lasting justice and peace between all communities within India, our heart goes out to all the victims of the recent terror attack on board the Samjhauta Express. The attack reveals above all, that terror and terrorism has no religion and victims of all communities, Muslim and Hindu, rich and poor can easily become the victims of such an attack. We offer our deepest condolences to all the affected families in this moment of grief.

We unequivocally condemn this attack that is an attempt not only to de-rail peace talks but also to create schisms and rifts between communities. We thank the political leadership of both countries for using sombre and sensitive language at such a time and urge them -- specifically the intelligence and investigative authorities of India -- to go further and rigorously investigate and get to the bottom of such an attack.

Outfits of terror have no religion and should never be equated as such. The language and acts of terror can be perpetrated by fanatic outfits within any and all social, political and religious sections. Similarly victims of terror as today's brutal incident shows, can hail and do hail from all sections. Terror and terrorism can be home grown as well as imported; both equally are not just anti-national, they strike at the fabric of our nation because they create schisms between communities.