Our One And Only Shangri-La

Shangri-La, the most used and abused nomenclature in hotelier history, is 68 years old and describes a place which doesn't exist. Alice Albinia untangles the myth 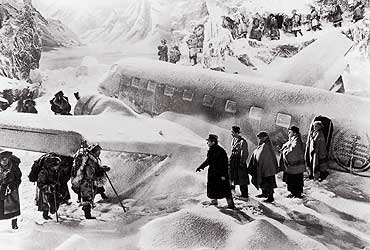 outlookindia.com
-0001-11-30T00:00:00+05:53
1933: James Hilton’s novel Lost Horizon is an excited evocation of Shangri-La, a valley in Tibet, whose inhabitants live in perfect peace. Penned in a post-WWI world, the fictional concept becomes an instant hit.

1933-1945: Sworn in as 32nd President of the United States the year the book comes out, Franklin Delano Roosevelt takes the name in vain, christening both his Maryland presidential retreat and the secret base from which James H. Doolittle led the 1942 bombing raid on Tokyo after the Himalayan idyll.

1937: Shangri-La’s eternal infamy is assured with Frank Capra’s lush film of the book—starring Ronald Colman and featuring some wild snow scenes in decolleté dress. 1960s: As Beatlemania grips the world, four hip girls from highschool call themselves The Shangri Las, dress in leather catsuits and top the charts with a motorcycle elegy, Leader of the Pack.

1973: The musical version of Lost Horizon flops—despite the enlightening presence of John Gielgud as a Tibetan monk.

1997: The century draws to a disillusioned close—and anything goes in Shangri-La land. From "clothing optional" nudist colonies in Arizona, to semi-transparent window shadings...the name is everywhere, full of high-altitude sound and glory...and signifying nothing. As Stevie Nicks puts it with a pout, There’s Trouble in Shangri-La.

1998: Meanwhile, the battle rages over where exactly Shangri-La is. After five years of searching, an American explorer called Ian Baker discovers a previously unchartered waterfall in the wilds of east Tibet, which he claims leads via a rock portal to a mysterious valley. The Chinese authorities promptly close the area to foreign exploration. For in 1997—always one step ahead—they had cheerily found, requisitioned and relocated Hilton’s Shangri-La within their own Yunnan Province. Tibetans and hoteliers across the globe try to raise a storm; but the Hilton estate does not say a word. Shangri-La, after all, had long since passed into the public domain.

2001: But just when you thought that every idyll has a rotten core, Outlook Traveller can reveal a soothing home truth. According to the website of a Clark University NRI, Hilton’s horizon is now, always was and ever shall be located at 14,000 ft...in Arunachal. You saw it here first. Go forth and find your desi Shangri-La. (NB: Arunachal Tourism deny all knowledge of the pass in question.)