We Must Politicise The Hathras Rape Case

If the Hathras rape case is not politicised, it will very soon be wiped off from public memory – only to join thousands of more such cases in the dusty rooms of our courts. 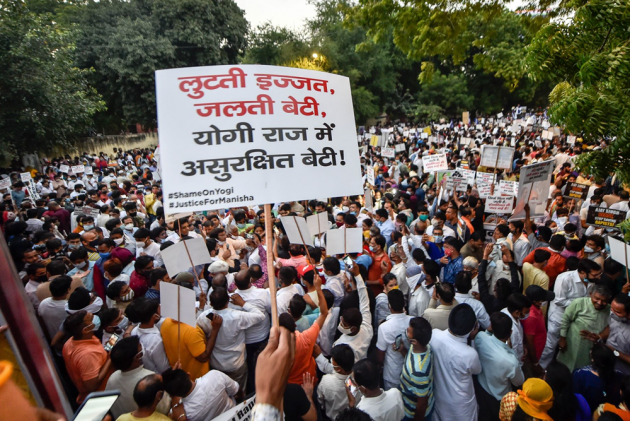 I know the title disgusts you, dear reader. I urge you to bear with me for the space that the editor has so generously given to me at the risk of being grossly misunderstood. It is both good and bad that the title of this column disgusts you. It is good because in your imagination of the meaning of ‘politicise’ – where politics is the practice of gaining vote banks by hook or by crook, or rather, at the expense of a victim – it is an absolutely deranged and inhumane thing to do. It is bad because if the preceding is true, then you have limited the meaning of the term ‘politicise’ to the definition that I just mentioned, and it disgusts you, which it should. It means you have a moral conscience and that you comprise a very thin slice of the people left with that virtue in the country today.

Politics – noun as well as the verb – is much maligned by its popular practice and much demonised in the imagination of the people. The practice, however, is essential to life in modern society – more so for the communities that have been historically deprived of social and economic capital. While those at the helms of social power can rely purely on electoral politics and survive unscathed and untouched from the prevalent bigotry and hatred that the state explicitly peddles, for the oppressed, a reliance on and faith in only the electoral aspect of politics begets the same cycle of discrimination that has oppressed them for millennia.

A definition of politics that is purely electoral – where you elect a government and trust it to protect your rights – is exclusionary of the weaker voices in the society. The privileged can afford to limit the definition of politics to electoral exercise, but for the weak, politics has to be understood and practised in its wider and complete sense – with the individual as the unit of political thinking and practice, and mobilisation as the method to constitute a parallel and organic polity. The weak cannot rely on the state. Their politics has to be on the ground, in their neighbourhoods, in their homes, and in their minds.

What happened in Hathras September 14 and what followed stands as a glaring example of systemic oppression. The nineteen-year-old girl who was brutally raped and assaulted by four upper-caste men, and eventually succumbed to her injuries, was not just a victim of social hierarchy, but also of the state government that reflects this social hierarchy. The only difference between the caste-ridden society and the government is that the latter has all the legal and institutional resources to execute injustice and violence.

The immediate apparatus of the state – the police – that was supposed to be the recourse for the victim and her family humiliated and rejected them, did not file an FIR for six days, did not arrest anybody for ten days, twisted the narrative, called it fake news, delayed the treatment of their daughter, and upon her death, burned her body without consent. The police – an arm of the state government – we are told, took the decision to forcefully burn the body of the victim at their own discretion. Similarly, the District Magistrate – another state executive – took it upon himself, apparently, to threaten the family into silence. All arms of the State Government worked against the victim and her family, against the principles of natural justice, and against the very fundamentals of human values. Not only was the victim denied the audience and the right to legal remedy, but she was also denied the dignity of a funeral. The Dalit was dehumanised in life and in death.

The state also used police and the bureaucracy to suppress the political voices that rose to support the victim’s family. Rahul Gandhi and Priyanka Vadra were prevented from going to Hathras and were detained by the police, only to be allowed later in limited numbers. Dalit rights activist and leader Chandrashekar Azad was put under house arrest. The notice that he received on October 1 stated that he must stay at home lest an “untoward incident” happens. As the police gathered outside Azad’s home in Saharanpur and Priyanka Vadra and Rahul Gandhi were manhandled in Delhi, a recent video showed the police watching as a young Thakur leader threatens and intimidates the family of the victim outside their house because “they have no faith in the system”.

It adds insult to injury to expect faith in the system at this point. In a reality where the aforementioned prevails and the elected government becomes a threat, there remains only one recourse – to be political on your own.

Dr. B. R. Ambedkar’s call to his people - ‘educate, agitate, organise’ – was, in effect, a call to create a parallel politics from the bottom upwards. The call illustrates that he had very clearly observed and prophesied that the modern nation-state that India was going to be, will not bring about any significant change in the Dalit condition. The promised dream to emancipate the Dalit from the identity of their birth was impossible to be realised in a society that practiced the caste systems for millennia. It is, therefore inevitable, that politics propelled and created by this society will not be the politics of the Dalit. Hence, they must create their own politics with the triadic vision of Ambedkar as its practice.

As the Hathras rape case unfolds, we see a sharp image of this prophecy emerging. The truth is that in the lived reality of the Dalits, the mirage of liberty has been revealing its true nature ever since the promise was made. It is clear in this case that the demand for justice has to come from outside the elected government since the government – against the social contract – is not the protector of rights any longer. It is, therefore, an expression of immense privilege stained with apathy and indifference, to say that the opposition and the Dalit leaders must not politicise the rape case.

As we saw, the crime that is channelled through the structures of power and politics of caste is using the state itself to subvert justice. The victim, who is not just failed by the state but attacked by it, cannot hope for justice from her attackers themselves. And the narrative that is spun by the media controlled by the same structures that control the society and the state, cannot be reclaimed in truth by the ones who are situated at the very bottom of the socio-political hierarchy. The only way here is to politicise – for the Dalit leaders to create resistance and for the opposition to fuel the grassroots and mobilise the underprivileged sections across the country. If the Hathras rape case is not politicised, it will very soon be wiped off from public memory – only to join thousands of more such cases in the dusty rooms of our courts.

It is either ignorant or vile to accuse the politicians, the media, and activists who are the voice of the voiceless here of playing identity politics. Actually, the crime and the state’s response was the most toxic form of identity politics that could be practiced – one where the accused are protected by the state and the victim is deprived of all human rights that the constitution promises her regardless of caste and creed. The protests are a call – in anger – to provide natural justice to the victim and punishment to the assaulters regardless of their caste identities. The outrage is against identity politics, it is a reaction to the politics of caste-based oppression. We must politicise the Hathras rape case. It is indispensable.

(Fahad is an academic and writer based in Ahmedabad. He writes about Politics, Cultural Theory, Human Rights, History, Architecture, and City Studies.)