National The Vaidyan’s Vial: Stirring A Mix Of The Old And New

The Vaidyan’s Vial: Stirring A Mix Of The Old And New

Ayurveda presents a fascinating but complex story of evolution. It has embraced modernity patchily, and perhaps not enough in the right processes. Especially with safety concerns. 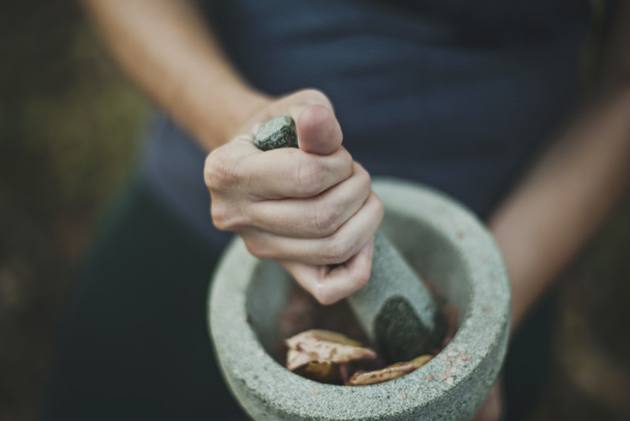 Ayurveda is in a strange state of evolution—if we manage to see it with a sense of historical distance. Seen up close, of course, it’s not a ‘state’ but a process that’s unfolding before us. One can think of this evolution as an unnatural turn because it’s not an organic process driven by internal forces, but a process forced upon it because modernity demands it. That encounter has set off rapid transformations—scientific clarity is increasing in a field that was often marked by a druid-like secrecy. But that’s only one part. New doubts and dilemmas also abound, for both Ayurvedic theory and practice. The lens of modern science, especially when applied in a mechanistic and dogmatic manner, often fails to arrive at a fine-grained understanding of Ayurvedic principles.

A quick history of this uneasy encounter can reveal some vital points of dissonance. Especially because, the way Ayurveda was practised, it had a couple of key elements that systemically demarcated it from allopathy.

One, it was integrated into an everyday practice of self-care, it was a way of life. People routinely prepared the well-known formulations on their own, in pre-modern domestic settings where they had access to the herbs, and their use was part of daily routines. Thus, the approach had a strong preventive element—the focus was on fortifying the body so as to enable it to fight disease. This broad approach still flows into professional primary and secondary care, even into tertiary domains where Ayurveda is sought to be integrated. (By contrast, allopathy is typically a post-disease intervention.)

The Difficult Conversation Between Ayurveda And Allopathy

Two, crucially, physicians provided individualistic care to patients. They prepared unique formulations for each patient differently, depending on their reading of the patient’s physiology.

The classical texts are elaborate on diagnosis. Many variables are considered to reach a diagnosis in Ayurvedic science, the basic one being the nature of the body read through the kapha/pitta/vatha framework: the Ayurvedic understanding of body metabolism. Thus, three people with the same disease but different body constitution could be given three different medicines.

The humoral theory—of body types being divided into kapha, pitta, vatha—is only a gross classification. That template is realised in each instance as shades and degrees of humoral blends. The concept is that the five elements—air, water, earth, fire and space—are reflected in the human body too in various combinations of the tridoshas, a metaphor to describe certain bodily dispositions and not a literal reading of kapha as phlegm or vatha as air.

Ultimately, it meant medicine and treatment protocols being fluid and individualised across a range—a stark contrast to the standardised approach of allopathy. The vaidyan detailed the precise quantums/dosage of herbs to be used by a particular patient, the patient would follow that while preparing the medicine at home.

This personalised template was also one of the major hurdles in commercialising Ayurvedic drugs. That is, till the legendary scholar and Ayurvedic practitioner P.S. Varier started preparing kashayams and bottling them for his patients, laying the foundation to one of the most well-known Ayurveda houses—Kottakkal Arya Vaidya Sala—in 1902.

Varier was inspired by the fact that patients visiting allopathic doctors were taking home the prescribed medicines. He decided to start giving his patients the exact dose of medicine he prescribed. Anyway, certain medications always involved intricate processing that called for the vaidyan’s expertise.

As it is, the older practice of oral prescriptions for which the patient or his/her family collected the herbs became increasingly challenging in modern times. People’s lives were getting distanced from nature—the old Ayurvedic lifestyle was fading as a practice. People’s knowledge of flora and fauna now came not from nature, but from books. Getting the right type and quantity of ingredients prescribed by a physician was not easy.

Modernity caught up at the other end too. With increasing population, it was becoming difficult for vaidyans to prepare medicines for each patient individually. Thus, the crossover to generic medicines in Ayurveda was perhaps an inevitable first step towards meeting this challenge.

After Kottakkal showed the way, many other renowned Ayurveda houses also began preparing generic medicines. Medications elaborated upon in the classical texts now became available to a larger population. But this was a fundamental change, and would have profound consequences.

Broadly, diagnosis and treatment modalities continued to rely on the classical texts—even if modern diagnostic tools were slowly integrated into this grid. The texts reveal a depth of empirical knowledge as various manifestations have been described along with treatment methods, says Dr S. Anand, assistant professor, Department of Rasasastra and Bhaishajyakalpana, Government Ayurveda Medical College, Thiruvananthapuram.

The texts are also quite elaborate where the use of toxic substances has been indicated, he says. Various processes have been mentioned on refining the substances during drug formulation that leaves no room for toxicity, and turns the final product into a medicine, he adds.

Toxicity is a concern that has always followed Ayurveda in modern times, but there are two sources for this. One is where the drug is explicitly meant to contain a substance, say mercury—which, when handled and processed with extreme care, does not remain toxic anymore. The other is contamination via soil while sourcing the herbs—this is largely a modern scourge owing to pollution, and Ayurvedic drugs are quite vulnerable on this front. An effective testing mechanism is mandatory here.

Besides methods of drug preparation, the texts also talk of primitive preservation techniques in some of the drug forms, like arishtams, lehyams or medicated ghee preparations. Some of these moved seamlessly into mass production, but technology is coming in here.

The potential of technology in Ayurvedic drug-making and testing is yet not fully realised, says Dr P.Y. John, former senior drug inspector, Kerala Drug Controller’s office. While there are many pros and cons to be considered in mass production, there’s no doubt new technology can be utilised in finding better methods of testing and understanding the formulations, he says.

Packaging is another area where technology has become significant. Keeping a check on the moisture content in drugs improves quality. Hygroscopic powders have certain salts that attract moisture. For example, powders like Ashtachoornam or Triphala should have less than 2 per cent moisture at packaging stage. These could become hard and lose the free-flowing texture at higher levels of moisture, says Dr John.

Problem is, the Drug Control laboratories are quite meagrely equipped to test Ayurveda drugs, though there has been some improvement in recent times. Some major tests done by these laboratories are to check aflatoxins (indicating fungal presence), microbial limits, pesticide residue, presence of mineral oils and heavy metals like lead, mercury, arsenic and cadmium.

Besides assaying the drug for its quality and quantity—under microscopy to observe details of microbial organisms, thin-layer chromatography to check the details of the ingredients—physical properties are important too. A drug’s organoleptic properties need to meet certain standards—smell, colour, taste and moisture content. The raw materials are analysed physically before putting it under a chemical test, says Dr John. All drugs—new or classical—need to undergo tests focusing on the API (Ayurvedic Pharmacopoeia of India) and stability tests.

Heavy metal contamination would remain an issue in Ayurvedic drugs unless raw material sourcing gets better, says Dr John. Drugs manufactured in Kerala largely are usually free from adulterants like steroids or other modern medicine components, but the same cannot be said about drugs coming from other states.

The Drug Controller’s office could be more vigilant and effective only if it is strengthened. In Kerala where there are about 650 companies listed as Ayurveda drug manufacturers, there are only three drug inspectors. The official ratio is to have one inspector for 30 companies. Even though there are only about 20 companies in the medium and large sector, survey sampling of drugs and statutory inspections need to be done regularly, which is an impossible task with limited staff. On an average, in a year an inspector could collect about 150 samples for surveying and may conduct about 200-250 statutory inspections.

Clearly, there needs to be much, much more happening on this front. Even in Kerala, despite a thriving Ayurvedic ecosystem, a full-fledged post such as the Deputy Drug Controller (Ayurveda) only came in recently. Earlier, professors from Ayurveda colleges were deputed for the job. If this indigenous system of medicine is to be propagated keeping in mind safety concerns, there needs to be political and administrative vision.

(The writer is an independent journalist based in Kochi, and covered health for The Hindu for 20 years. This report was supported by a grant from the Thakur Family Foundation. The foundation did not exercise any editorial control over its contents. The next article in this series will look at the challenges within Ayurvedic pharmacology.)